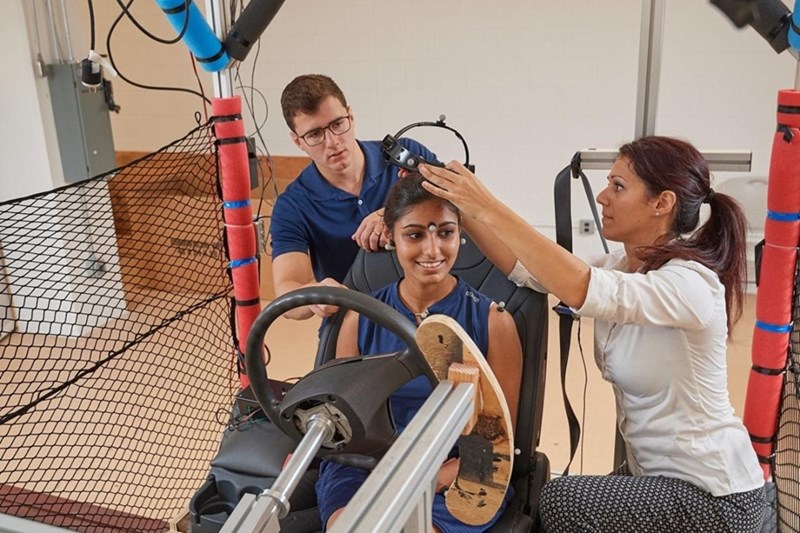 Ethan Douglas works with a volunteer prior to conducting an experiment to track her biomechanics during a simulated car swerve. He helped build the simulator.

Ethan Douglas is a sports enthusiast who crunches numbers and figures everyone should learn how to code.

The 2017 University of Arkansas kinesiology graduate has taken each of these interests and melded them into a new career.

Previously a senior policy analyst at Consumer Reports, Douglas recently took a new position as data analyst at The Athletic. The subscription-based sports website covers national and local sports in 47 North American cities and the United Kingdom. He analyzes the website's content to help identify what resonates most with readers — and writes on occasion. The site is a mix of long-form journalism, original reporting and in-depth analysis.

A few weeks ago, he elevated his numbers game and developed an "Expected Power Rating" metric for The Athletic. It measures a team's overall strengths, going beyond just wins and losses. The EPR rating predicts how teams will fare against one another.

Douglas began his coding journey here at the U of A, when his undergraduate mentor and professor, Kaitlin Gallagher, entrusted him to analyze biomechanics data they had collected in her lab with custom MATLAB scripts she had written. The power of programming immediately intrigued him.

"The ability to draw conclusions from hugely complex data with just a few lines of code ... it felt like magic," he said.

Douglas has always been a high achiever.

After graduating from the U of A, where he was an honors student, he went on to earn a master's degree in engineering from the University of Pennsylvania. He continued to leverage his coding skills there, and was awarded an "Outstanding Research Award" for his research and analysis on pediatric biomechanics.

At Consumer Reports he led research and analyses on issues related to cars and product safety to help create a safer marketplace. On a practical level, this often meant analyzing government injury or fatality databases to identify emerging trends in automotive and product safety so that manufacturers and regulators could adjust.

He's written about automotive safety, ergonomics, and biomechanics for a variety of scientific publications. But his drive to uncover unique insights from piles of seemingly random pieces of information didn't stop there. To continue developing his skills, he turned to sports. Douglas, from Overland Park, Kansas, said the sports analysis started as a fun hobby where he could practice coding and data analytics skills while also learning more about football.

That's how he learned to create fancy metrics.

"There's a great public resource for NFL data called nflfastR that I stumbled upon, where anyone is free to download or 'scrape' a bunch of play-by-play data from the NFL," he said. "This allowed me to uncover some pretty cool insights about the performance of the Kansas City Chiefs, my hometown team, and post those insights in the form of charts on my Twitter account."

His tweets led to the opportunity to blog every week about his findings on the platform Arrowhead Pride, an SB Nation-owned blog covering the Chiefs.

Douglas believes that no matter what field you're interested in, learning to code can open doors and "allows you to solve problems in a way few people can."

"I think there's a bit of a stigma around coding — that it's only for a certain type of person — but that couldn't be further from the truth," he said. "There are so many great free online resources available for all types of learning styles, and as our world becomes more and more intertwined with technology I think it's a skill everyone should at least take a shot at learning."

Douglas recently earned the 2020 Health, Human Performance and Recreation Outstanding Alumni Award from the U of A for his accomplishments after graduation.

"This award was an incredible honor to receive, especially so early on in my career," he said. "I have been supported and encouraged to push myself and swing big. It's nice to see my hard work recognized, but this award is definitely more a reflection of the great people I've been fortunate enough to surround myself with."

Ethan said part of that fortune involved getting into the research lab early in his academic career at the U of A and working with mentors like Gallagher in the College of Education and Health Professions.

"Her guidance and trust in me gave me the confidence to keep taking risks and stretching myself still to this day," he said.

This story is the latest in a series called the Dean's Spotlight, featuring outstanding students in the College of Education and Health Professions. Visit COEHP's online magazine, the Colleague, for more news from the six units that make up the College. Find out more about the exercise science program on the Health, Human Performance and Recreation page.