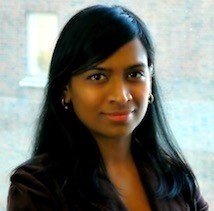 Mita Dasog of Dalhousie University will give a virtual seminar titled "Plasmonic metal nitride nanoparticles: The story so far" on Zoom from 3:30-4:30 p.m. Central on Monday, Nov. 16. The talk is free and open to the public.

Dasog obtained her bachelor's degree in chemistry from the University of Saskatchewan. She then moved to the University of Alberta to begin her Ph.D. studies with Jonathan Veinot, where she focused on the syntheses, properties, and applications of silicon quantum dots. After a short stay at Technical University of Munich as a Green Talents visiting scholar, Dasog went on to hold an NSERC post-doctoral position with Nathan Lewis at the California Institute of Technology, where she is studied light-material interactions in semiconductor wire arrays.

In the past two decades, there have been many advances in the development of plasmonic nanomaterials and their application in chemical sensing, photothermal therapy, enhancement of photovoltaic device performance, catalysis, solar-driven desalination among others. To date, nano-sized metals such as gold, silver, and copper have been well-explored for plasmonic applications, however gold is expensive, and silver and copper succumb to oxidation which dampens their plasmonic response.

In a quest to develop plasmonic nanomaterials that are low cost and chemically stable, transition metal nitrides have emerged as strong contenders based on computational studies performed in the last decade. However, the experimental evidence of this remains scarce.

In this presentation, Dasog will highlight some of the recent progress in her research group on the synthesis of free-standing plasmonic transition metal nitride nanoparticles. The chemical stability and photothermal properties of metal nitrides will also be discussed.