Fulbright Scholar Creates Platform to Connect People With and Without Disabilities 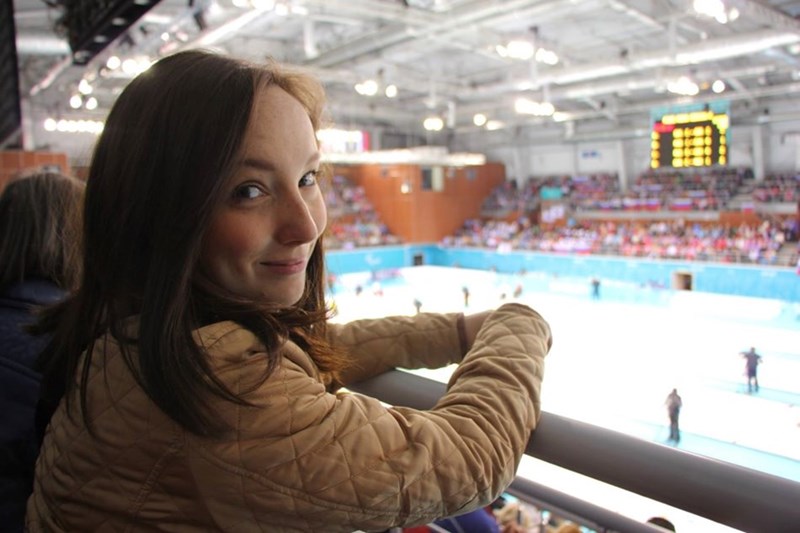 Olga Khokhryakova in 2014 at the Paralympic Games in Sochi, Russia.

Moscow native Olga Khokhryakova is a second-year graduate student in Community Health Promotion at the University of Arkansas. But she's already contributing to her field in the way a young faculty member might.

Khokhryakova, a Fulbright Scholar, created an online platform called SameSport, which connects people with and without disabilities through shared sport activities. Her goal is to reduce stigma and prejudice, while enhancing social inclusion. She's linking various fields in the College of Education and Health Professions, including exercise science, rehabilitation counseling, and public health.

In 2017, Khokhryakova launched the first database of sport clubs for people with disabilities in Moscow. After moving to Northwest Arkansas in August 2019, she brought the concept with her. Her long-term plan is to have SameSport chapters in every country.

Khokhryakova developed the project with help from the Social Innovation Initiative at the Office of Entrepreneurship and Innovation in the U of A's Walton College of Business. She's collaborating with former Russian athlete Anastasia Samoylova, who has participated in sports for  people who are deaf or hard-of-hearing.

Khokhryakova doesn't have a disability but was inspired to create SameSport after attending the Paralympics Games in Sochi in 2014. There, she saw blind people mountain skiing and people with physical disabilities confidently maneuvering snowboards, for example.

She believes that inclusion is a two-way process.

"Social inclusion is not a charity act with including someone who is excluded. We all are responsible for the quality of a society we live in," she said. "As an example, research shows that often one of the main barriers for children with intellectual disabilities to be actively engaged in sports is an attitude in the community towards them. As a representative of the majority, I feel it's my responsibility to act, and to participate in building a new normal."

Khokhryakova said one of the most effective ways to reduce stigma and prejudice is to play sports together, where participants have common goals and must cooperate with one another.

"Sports are recognized by the U.N. as an effective tool for development and peace building, as well as its contribution to reach Sustainable Development Goals by 2030," she said.

Before coming to the U of A, Khokhryakova was an award-winning journalist with nine years of experience. She has a bachelor's degree in journalism and a master's degree in social history from the Higher School of Economics in Moscow. She's participated in several prestigious educational and exchange programs, including programs with the Clinton Foundation Global Initiative University, the Eurasia Foundation and the International Center for Journalists.

Khokhryakova wasn't sure what to expect coming from Moscow, the capital city of Russia with more than 13 million people, to a small university town in Arkansas.

"Today I can say with confidence that I personally and my project never grew as fast as this last year at the U of A," she said. "This is thanks to my Community Health Promotion program — especially to my professors Dr. Leah Jean Henry and Dr. Robert Davis — as well as the Walton College of Business, especially the director of the Social Innovation Program at the Office of Entrepreneurship and Innovation, Dr. Rogelio Garcia Contreras."

This story is the latest in a series called the Dean's Spotlight, featuring outstanding students in the College of Education and Health Professions. Visit COEHP's online magazine, the Colleague, for more news from the six units that make up the College. Visit the Health, Human Performance and Recreation page for more information on COEHP's Community Health Promotion program.