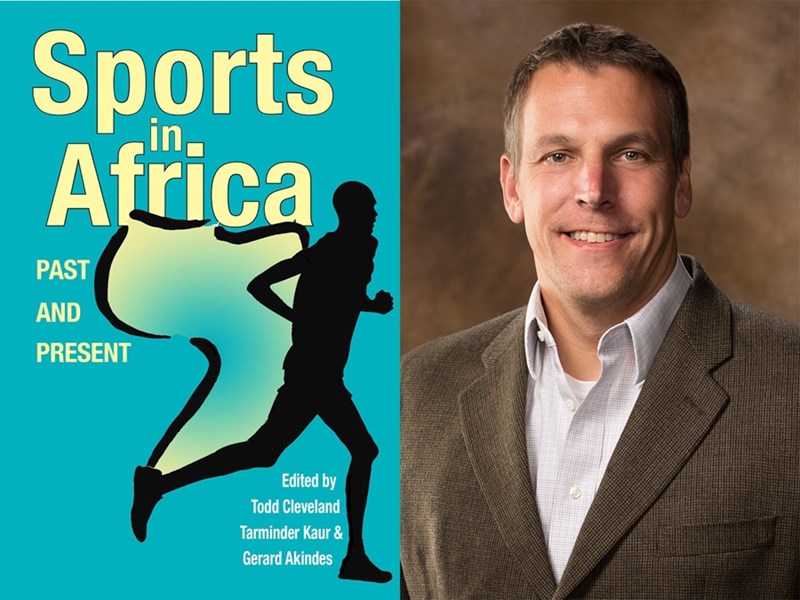 The book cover of Sports in Africa, and author Todd Cleveland.

A new edited collection of groundbreaking essays explores how Africans past and present have utilized sports to forge complex identities and shape Africa's dynamic place in the world.

Published by Ohio University Press, Sports in Africa: Past and Present examines the ways that Africans appropriated sporting practices to fulfill their own varied interests, especially as mechanisms of resistance against European colonial powers.

Professor Todd Cleveland, the book's lead editor, worked with international co-editors Tarminder Kaur (University of Johannesburg), Gerard Akindes (Josoor Institute, Qatar), and 20 authors from the United States, Africa, and Europe to produce this collection. The 17 essays in the collection present how since the late 19th century, modern sports in Africa have both reflected and shaped cultural, social, political, economic, generational, and gender relations on the continent.

Although colonial powers originally introduced European sports as a means of "civilizing" indigenous populations and upholding then current notions of racial hierarchies and "muscular Christianity," Africans rejected this European structure and embraced sports for their own purposes. Sports in Africa encompasses a wide range of topics, including women footballers in Nigeria, Kenya's world-class long-distance runners, pitches and stadiums in communities large and small, fandom and pay-to-watch kiosks, the sporting diaspora, sports pedagogy, sports as resistance and as a means to forge identity, sports heritage, the impact of politics on sports, and sporting biography.

Sports in Africa has drawn early praise. Professor Thompson of Stellenbosch University in South Africa argues that "this collection of essays opens up the debate on the influences of social history, subaltern studies, and postmodernism in stimulating new research and pedagogical approaches to sports in Africa." It stands as "a go-to volume for those seeking a solid introduction to the politics, poetics, and practices of the fascinating life-worlds of sports in Africa."

Cleveland is an associate professor of history and associate chair and director of graduate studies for the Department of History in the Fulbright College of Arts and Sciences at the University of Arkansas.