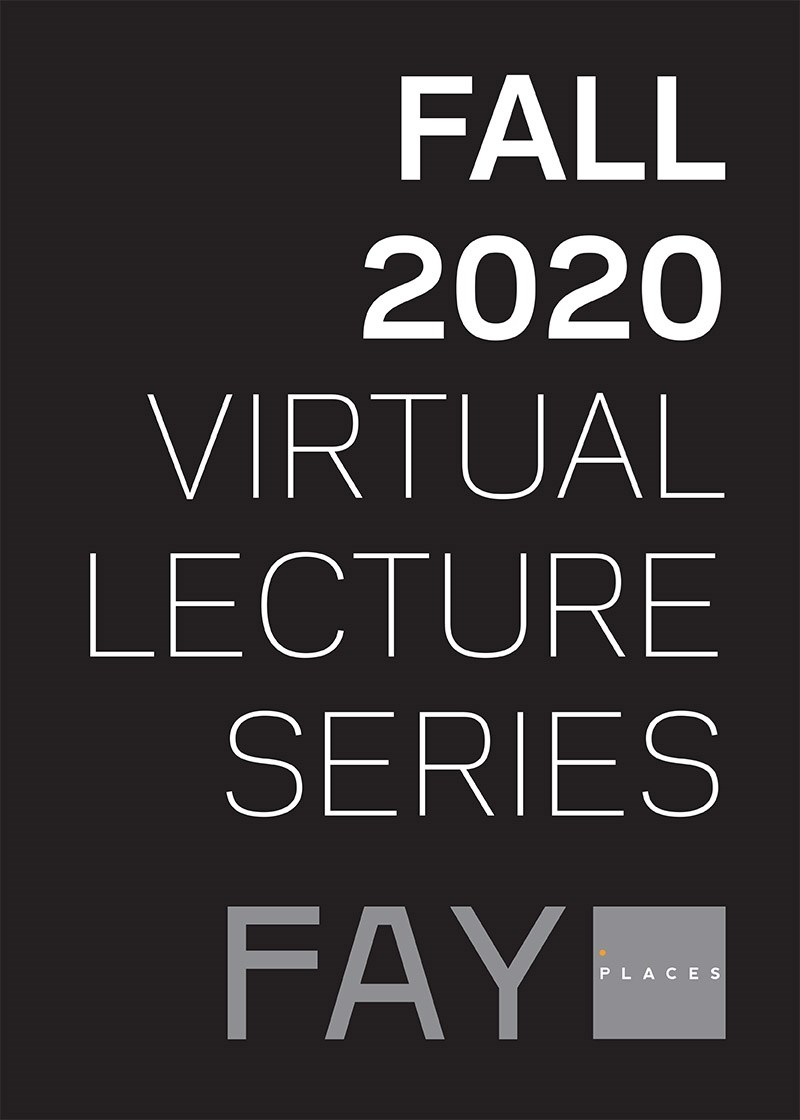 FAYETTEVILLE, Ark. – How can the designers of the built environment expand the discussion about important pressing issues — such as the realities of a global pandemic and the urgency of the racial justice movement?

"The COVID-19 pandemic and demonstrations toward racial justice have upended our lives in ways that also reveal and exacerbate long-standing inequities in American society — inequities that are, at least in part, grounded historically in the design and planning of the built environment," said Brian Holland, assistant professor of architecture in the Fay Jones School of Architecture and Design at the University of Arkansas and coordinator of the school's lecture series.

A first step is to better understand the role and obligation that design professionals and design educators have. The Fay Jones School has joined with Places Journal, an internationally respected online journal of architecture, landscape architecture and urbanism, and the U of A Office for Diversity and Inclusion to facilitate six such conversations in a fall lecture series, accessible fully online.

"We want to explore what role designers and architects can play in addressing the many challenges we're facing today, and to uncover opportunities for building a more equitable and just world using the tools of our disciplines," said Holland. "In response to the urgency of this moment, we sought out speakers whose work could offer both gravity and optimism. How can we learn from past mistakes while strengthening our commitment to the design of a better future?"

The Fay Jones School and its collaborators will present this virtual lecture series over six Mondays in October and November, with contributors who each address these issues in their own way through their distinguished works of design and scholarship. These local conversations also tap into broader national and even international conversations.

"The past six months have focused the public's attention on issues of racial and social justice in a really important way, and design professionals are increasingly recognizing the need to expand diversity, equity and health in the built environment. Our aim with this series is to contribute to those conversations in a powerful and substantive way," Holland said.

Sara Jensen Carr, the first lecturer in the series, has a forthcoming book that focuses on epidemics and the design of the urban landscape.

Another lecturer, Irene Cheng, recently released a book with her co-editors titled Race and Modern Architecture: A Critical History from the Enlightenment to the Present.

"It's a topic that has been understudied in architecture, so Cheng's book will help us expand present conversations about racial justice — taking place nationally and here on campus — to include the design professions," Holland said.

This fall's series intentionally focuses on broadening the diversity of speakers and their expertise.

"Architecture and the design disciplines will benefit from a greater diversity of voices. For too long, that diversity has been lacking, so this has been one of our strong objectives with the series," Holland said. "We want to broaden the conversation by expanding the diversity of backgrounds, ideas and perspectives. We as designers need to embrace and empower a wide range of voices so we can all think about our work in new ways."

In addition to their public lecture, each speaker in the series also plans to either join a design studio virtually as a guest critic or host an intimate post-lecture conversation with design students and faculty.

“The school’s lecture series has historically been an extracurricular program of extraordinary individuals and practices in architecture and design,” observed Fay Jones School dean Peter MacKeith. “Under Brian Holland’s thoughtful direction, the series now attains a necessary new vitality and significance, signaling the school’s commitment to examining and addressing 'the fierce urgency of now' on all fronts and by all means.”

The speakers featured over the six weeks are all women, with the exception of Michael Manfredi, who will join Marion Weiss, his co-founder of Weiss/Manfredi Architecture/Landscape/Urbanism, for a lecture.

"The Office for Diversity and Inclusion is excited to share in hosting six extraordinary women architecture practitioners, educators and researchers," said Yvette Murphy-Erby, vice chancellor for diversity and inclusion. "Their thoughtful approaches utilize inclusive design to support the diverse communities they serve in today's social justice and equality struggle."

Places Journal, the other series collaborator, is a respected resource regarding the future of architecture, landscape and urbanism, wielding the power of public scholarship to promote equitable cities and resilient landscapes. Nancy Levinson, Places Journal editor and executive director, and Deborah Lilley, managing editor, said the lecture series aligns well with the online journal's mission.

"We're thrilled to co-sponsor a series that is spotlighting such a valuable range of voices, and to be working with our partners at the University of Arkansas towards our shared goal of building broader public constituencies for critical design research and practice," they said.

The fall lecture series is made possible in part by a gift from donors Ken and Liz Allen of Fayetteville, part of an overall set of commitments the Allens have made to the school’s programs and initiatives in diversity, equity and inclusion.

All lectures are scheduled for 4 p.m. on Mondays, and will be presented live online. To register for this lecture series, complete this registration form on Zoom.

The full slate of lecturers are:

Carr is an assistant professor of architecture, urbanism and landscape, and the program director of the Master of Design in Sustainable Urban Environments, both at Northeastern University in Boston, Massachusetts. Carr's current book in progress, The Topography of Wellness: Health and the American Urban Landscape, examines landscape responses to six historical urban epidemics and the implication for current and future practice.

Henry is co-principal of Current Interests, a Los Angeles based architectural design studio, and is on the design faculty at Southern California Institute of Architecture. Her built work is grounded in notions of material specificity, color relationships, assembly details, and an engagement in critical cultural thinking. Her formal research and writing focus on architecture, race and materiality. She is the recipient of the 2019 Architectural League Prize, Henry Adams AIA Award and Archiprix International Gold Medal.

Weiss and Manfredi are co-founders of Weiss/Manfredi Architecture/Landscape/Urbanism in New York City. The firm is perhaps best known for its expansive landscape projects, such as the Olympic Sculpture Park at the Seattle Art Museum, which joins an outdoor sculpture gallery and a beach across a challenging remediated post-industrial site — a scheme that garnered many awards. The firm is currently at work on the U.S. Embassy in New Delhi, India, the Tsai Center for Innovative Thinking at Yale University, a museum expansion for the Artis-Naples Arts Center in Florida, and a master plan for the La Brea Tar Pits in Los Angeles. Weiss is also the Graham Chair Professor of Architecture at the University of Pennsylvania. Manfredi is also a senior design critic at Harvard University.

Lokko is dean of the Bernard and Anne Spitzer School of Architecture at The City College of New York. She is a Scottish-Ghanaian architect, academic and best-selling novelist who was trained in the United Kingdom. She has taught and practiced architecture for the past 25 years in schools across the United Kingdom, United States and South Africa. She is best known for her work on the relationship among race, cultural identity and the speculative nature of African architectural space, and she has lectured widely in Europe, the United States, Australia and Africa.

Wilkinson is curator at the Smithsonian Institution National Museum of African American History and Culture in Washington, D.C. She co-curated two inaugural NMAAHC exhibitions: "A Century in the Making: Building the National Museum of African American History and Culture" and "A Changing America: 1968 and Beyond." In 2018, she served as lead organizer for the museum's three-day symposium, "Shifting the Landscape: Black Architects and Planners, 1968 to Now." Her research on architectural heritage in the Anglophone Caribbean has been presented to international audiences in Suriname, England, India and the United States.

Cheng is an associate professor of architecture at the California College of the Arts in Oakland. Her research explores the entanglements of architecture, culture, politics and the environment in the 19th and early 20th centuries. Her current book project, The Shape of Utopia: The Architecture of Radical Reform in Nineteenth-Century America, explores the geometry of architectural projects affiliated with anarchist, socialist, abolitionist, free love, spiritualist and other radical antebellum movements. She is also a co-director of the Race + Modern Architecture Project (R+MAP), an interdisciplinary research group that is exploring the influence of racial discourses on architecture from the Enlightenment to the recent past. She is a co-editor of Race and Modern Architecture: A Critical History from the Enlightenment to the Present.

More information about each of the speakers in this virtual lecture series can be found on the Fay Jones School website. Registration for the entire series is available on Zoom.