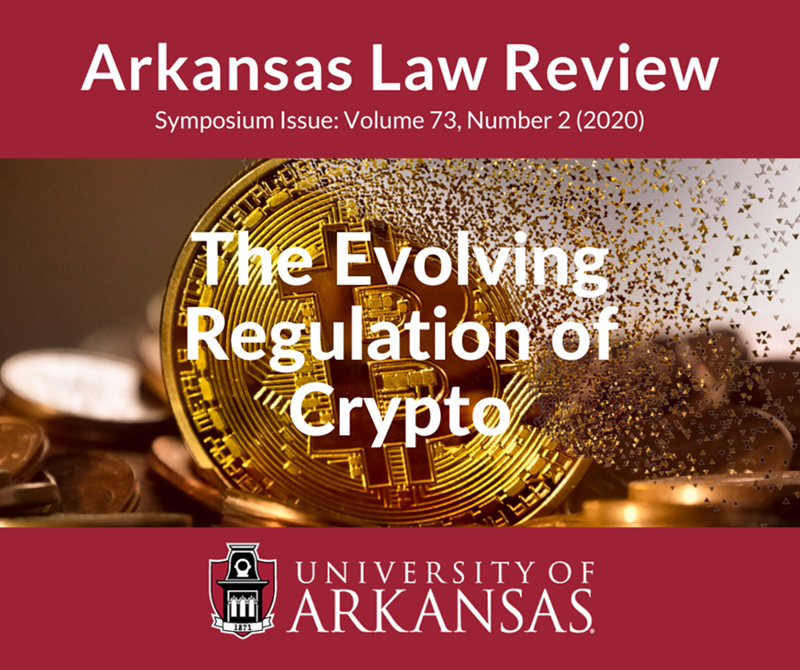 In a special issue dedicated to their annual symposium the newest issue of the Arkansas Law Review examines legal issues surrounding cryptocurrencies.

As a relatively new but immensely popular technology, various governmental regulatory bodies have each asserted regulatory jurisdiction over different aspects of virtual currencies. Each agency sees cryptocurrencies through the lens of their regulatory portfolio, yet by and large the laws which give them authority didn't contemplate even the existence of virtual currencies when they were drafted.

In late 2019, experts from the business world, government and law and science academia met and presented papers on this subject at the University of Arkansas School of Law. Several of the papers are included in this latest issue.

In "Virtual Currency as Crypto Collateral Under Article 9 of the UCC: Trying to Fit a Square Peg in a Round Hole," Sharon Foster, the Robert A. Leflar Professor of Law, explores how cryptocurrencies, despite being valued property, do not quite work as collateral under the language of the current Uniform Commercial Code.

Professor James Blakemore of the University of Michigan examines how regulatory agencies have approached classifying virtual currencies in his article, "New Things Under the Sun." He looks at how the Commodity Futures Trading Commission (CFTC), an independent United States regulatory agency, has asserted authority to regulate cryptocurrencies by defining them as commodities, and how their powers to do so have grown after the Wall Street reforms of the past decade.

Professor Mary Lacity, director of the Blockchain Center of Excellence at the Sam M. Walton College of Business, looks at the history, technical underpinnings, types, problems and future of cryptocurrencies in "Crypto and Blockchain Fundamentals."

In "Do We Need KYC/AML: the Bank Secrecy Act and Virtual Currency Exchanges," Stan Sater of the firm Founders Legal looks at the history of how the Bank Secrecy Act and Know Your Customer regulations have been applied to financial institutions and virtual currency exchanges, and he asks the question whether laws drafted prior to the invention of cryptocurrencies are a good fit.

Carol Goforth, University Professor, the Clayton N. Little Professor of Law and author of the book, Regulation of Cryptotransactions (West Academic, 2020), writes in her article about the history of payment systems and regulations covering money transmitters. She makes the argument that the current patchwork of state laws, which were originally intended for entities such as Western Union, don't fit the realities of crypto-based businesses, in "The Case for Preempting State Money Transmission Laws for Crypto-Based Businesses."

The Arkansas Law Review is edited by second- and third-year students in the University of Arkansas School of Law and is the premier journal of legal scholarship in Arkansas. Originally called the Law School Bulletin, the journal has been published since 1929. It was renamed in 1946.