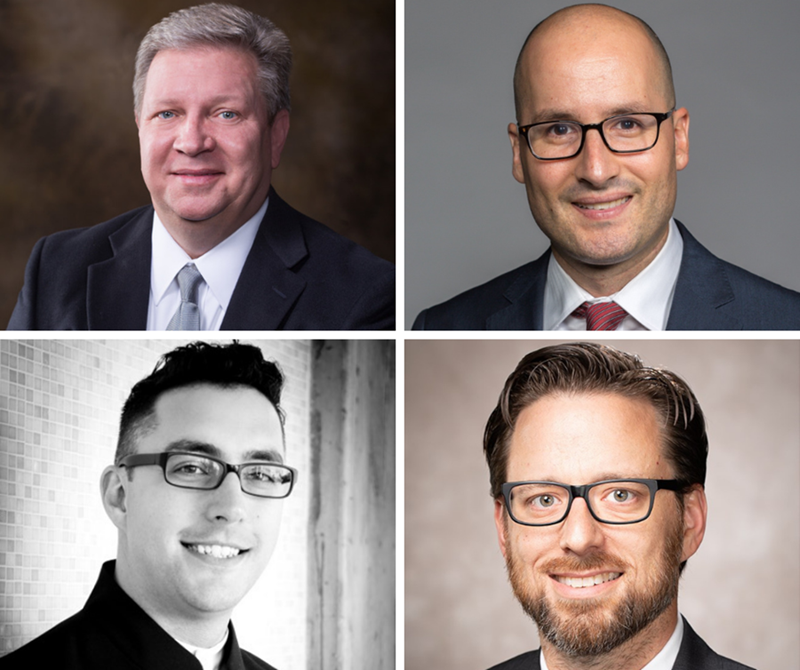 Join the Arkansas Alumni Association and the Fulbright College of Arts and Sciences for a special fall Lunch and Learn event — a Razorback Marching Band Roundup from noon-1 p.m. Thursday, Sept. 24, on Zoom.

Register now to save your spot. The Zoom link and password will be provided in your registration confirmation email.

Robert Hopper, from the Fulbright College Dean's Office, will moderate the discussion.

Knighten, Lorenzo, Summers and Hinkson will talk about how the Razorback Marching Band has been operating in 2020, the unique challenges COVID-19 has presented, some of the changes fans might see on game day, and how the program is striving to keep students safe while still giving them the best experience possible.

The special event is part of the Arkansas Alumni Presents program series offering interactive and informative programming for our students, alumni and friends.

About Christopher Knighten: Knighten is director of bands and associate professor of music in the Department of Music. His duties include conducting the Wind Ensemble, leading the graduate instrumental conducting program, teaching conducting and band literature courses, and overseeing all aspects of the band program. Knighten holds a D.M.A. in instrumental conducting and an M.M. in wind conducting from the University of Colorado at Boulder, and a bachelor's degree in music education from Baylor University. His creative and scholarly interests include conducting, band literature and pedagogy. He also currently serves as president of the Southwestern Division of the College Band Directors National Association and is an elected member of the American Bandmasters Association.

About Benjamin Lorenzo: Lorenzo serves as associate director of bands and director of athletic bands at the University of Arkansas, where he directs the 350-member Razorback Marching Band, conducts the Wind Symphony, teaches courses in conducting and music education, and assists with the Arkansas New Music Ensemble. He holds a D.M.A and an M.M. in wind conducting from the University of Texas at Austin, and a bachelor's in trombone performance from Florida International University. Prior to his appointment at Arkansas, Lorenzo served as Assistant Director of Bands at Oklahoma State University and Texas Tech University. His creative and scholarly interests include orchestration and wind ensemble repertoire.

About Jeffrey Summers: Summers serves as assistant director of bands, assisting with teaching and administrating the Razorback Marching Band, directing the Hogwild Pep Band, and conducting the Symphonic Band at the University of Arkansas. Summers holds a D.M.A. in instrumental conducting from the Frost School of Music at the University of Miami, an M.M. in instrumental conducting from the Sam Houston State University, and a bachelor's degree in music education from the University of Texas at Austin. His scholarly work focuses on contemporary band literature, and he has more than a decade of experience directing and teaching bands at the high school and college levels.

About J.R. Hinkson: Hinkson began his role as associate director of operations, finance and marketing with the bands program in September 2019. In his role, Hinkson administers the band and music department scholarships, provides outreach to future band members, and collaborates with the Arkansas Alumni Association and the Razorback Band Alumni Society to implement fundraising objectives. Following his graduation from the University of Arkansas in 2001, Hinkson went on to earn a master's degree in history from University of North Carolina-Wilmington in 2006 where he began his higher education career in advising, teaching and administration for UNCW's living learning communities.

About the Online Lunch and Learns: The Arkansas Alumni Association Online Lunch and Learn programs aim to engage University of Arkansas alumni, friends and family by hosting live online Zoom conferences in which a variety of different topics are discussed and presented. Each program features a different speaker and focuses on a different topic. Those who participate will have the opportunity to interact with and ask the speaker questions all while getting together — virtually — with other alumni across the globe. For more information on how to use Zoom meetings, view this short video tutorial.