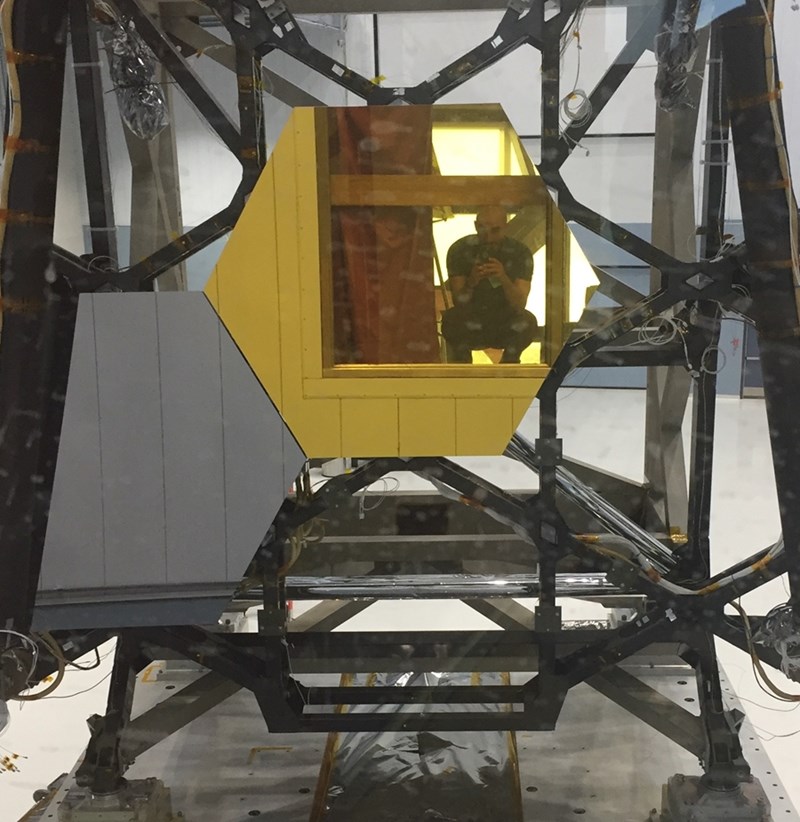 Part of the upcoming James Webb Space Telescope at Goddard Space Flight Center, now set to launch in 2021. Bonney is reflected in the mirror.

Paul Bonney, a Doctoral Academy Fellow in the Department of Physics, has received a $89,659 grant from the Future Investigators in NASA Earth and Space Science and Technology (FINESST) program to study the habitability of exoplanets using global climate models.

Great strides have been made recently towards the characterization of exoplanets in the hopes of identifying the signs of life in another solar system.

Bonney, in collaboration with researchers at Goddard Space Flight Center, developed a new technique to prioritize exoplanets for further characterization based on the probability that they are like Earth. He has used this technique to identify planet candidates discovered by the Transiting Exoplanet Survey Satellite that would be most suitable for follow-up observations and atmospheric modeling. The NASA grant will allow him to statistically investigate the habitability of exoplanets with a suite of 1D and 3D models using the General Circulation Model ROCKE-3D.

Creating and evaluating these models requires substantial computing power and will be performed using the Arkansas High Performance Computing Center. He will apply this method to three high-priority TESS-observed planet candidates to constrain the possibility of liquid water being present and assess the ability of next generation telescopes such as the James Webb Space Telescope to confirm its presence.

"By first establishing a method for prioritizing candidates and then performing targeted modeling of the star-planet system, this project allows for the most efficient use of limited space telescope time," said Julia Kennefick, Bonney's dissertation advisor and associate professor and vice chair of physics.

The FINESST award is part of NASA's Research Opportunities in Space and Earth Sciences program. This award was only one of 34 selected by NASA's Planetary Science Division and will fund the last two years of Bonney's doctoral research.