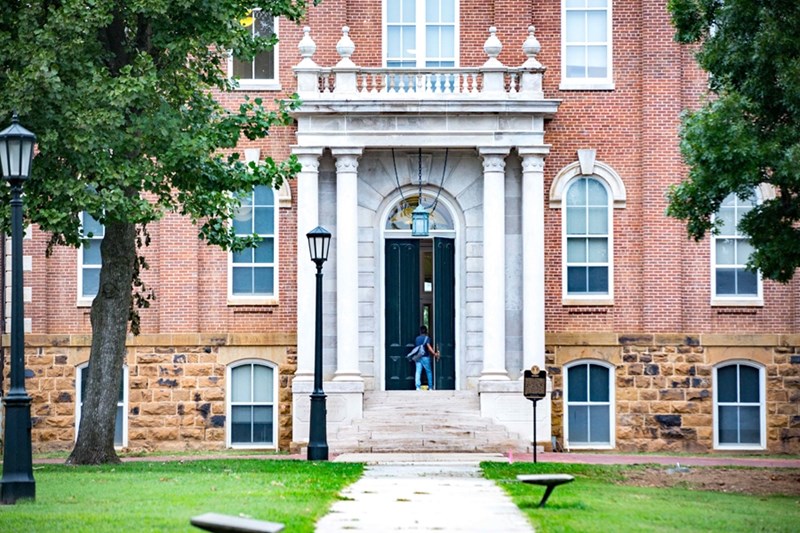 The Fulbright College of Arts and Sciences at the University of Arkansas has selected the 2020 recipients of several of its most prestigious endowed faculty awards, including:

"Now more than ever it is such a great pleasure to be able to recognize these amazing faculty members, who have dedicated their careers to making our college, university and the world a better place," said Todd Shields, dean of Fulbright College. "On behalf of the entire college, I'd like to thank them for their service and especially for all that they do to help our students succeed. These folks are incredibly inspiring!"

The John E. King Award for Outstanding Service was proposed and endowed by Fulbright College faculty members to recognize colleagues who exhibit exemplary service to the campus and community. They named the award for King, a professor of social work, as a tribute to his "leadership and extraordinary ethic and record of good deeds."

Recipient Daniel Sutherland's principal area of research is nineteenth-century America. He has written 10 books and edited five others in addition to publishing over 70 book chapters and articles in both popular magazines and scholarly journals. Sutherland has received over 50 honors, awards, and research grants, and five of his books have been selected by the History Book Club. Sutherland came to the University of Arkansas in 1989 and in 2011 earned the rank of Distinguished Professor.

"His long career has been marked by excellence in every part of the academic triad of teaching, research, and service," said James J. Gigantino II, chair of the Department of History, who nominated him. "Above all, Sutherland is an active servant to his particular field and our profession, who deserves recognition for decades of selfless service towards Fulbright College and the profession as a whole."

Gigantino said Sutherland previously served as history department chair, co-leads the endowed Hartman-Hotz lecture series in partnership with the Law School, serves on the history department's diversity committee, on the university's academic honesty committee, is editor of the Civil War Series at the University of Arkansas Press, and is actively involved with numerous national organizations including the Society of Civil War Historians.

The Nolan Faculty Award was endowed by the William C. and Theodosia Murphy Nolan Foundation to support the career advancement of faculty members who provide the highest quality teaching research and service to the college.

Recipient Kevin Fitzpatrick's principal areas of research include food insecurity and food access, health and well-being, community, homelessness, and adolescent risk-taking behavior. He has written six books, numerous book chapters, and dozens of referred journal articles. He has also received dozens of grants and awards since coming to the University of Arkansas in 2005 as the Bernice Jones Endowed Chair in Community. In 2015 he earned the rank of University Professor, and he's served as the director of the Community and Family Institute since 2007.

"Dr. Fitzpatrick has been a paragon of a graduate educator, demonstrating excellence and dedication to his students," said Shauna A. Morimoto, associate professor and vice-chair of the Department of Sociology and Criminology, who nominated him. "He also nurtures and advocates for his students and knows how to foster a sense of accomplishment and confidence in them. His impact on furthering graduate students' professional careers cannot be overstated."

Morimoto said it is especially remarkable how many of Fitzpatrick's master's students go on to obtain their Ph.Ds. at some of the most prestigious universities. Fitzpatrick is also known for involving his students in numerous publications, with many becoming co-authors on his community reports, infographics, and over 40 community factsheets. And, he engages graduate students in his community-based research projects, including multi-year partnerships with local school districts to assess health, nutrition, and food insecurity among the most marginalized youth.

Recipient Ben Vining runs the university's Environmental Archaeology Lab, which is focused on reconstructing the dynamics of human - environmental interactions that affected Holocene archaeological societies. The lab is dedicated to facilitating integrative, cross-disciplinary research to investigate how groups responded to past physical climate variability, and also how the ecological strategies that archaeological societies employed created lasting anthropogenic change.

The lab's main area of research is in the Peruvian Andes and other regions of Latin American, but past research has also taken place in the Mediterranean, Near East, and East and South-East Asia.

"We are excited to select Ben Vining as the 2020 OMNI Keeling/Hansen Climate Science Awardee," said Peter Ungar, distinguished professor in the Department of Anthropology and director of the Environmental Dynamics Program (ENDY). "Dr. Vining is an archaeologist who publishes regularly on the dynamics of human - environmental interactions that affected past cultures. His work focuses both on how people of the past responded to climate variability, and how past societies changed their local environments. He is also committed to environmental education on the highest level, training ENDY doctoral students and teaching ENDY's core course, Society and the Environment."

The OMNI Center for World Peace and Justice Faculty Award

The OMNI Center for World Peace and Justice Faculty Award was created to "promote the study and teaching of peace and nonviolence."

Recipient Toni Jensen teaches fiction writing, creative nonfiction writing, and North American Indigenous literature. She is the author of From the Hilltop, a collection of linked stories published through the Native Storiers Series at the University of Nebraska Press. Her fiction has appeared in Stories from the South: The Year's Best, 2007; Best of the West: Stories from the Wide Side of the Missouri, 2011; and Denver Quarterly, among others.

Drawing on American Indian oral traditions and her own Métis upbringing, Jensen tells stories that mix many lives and voices to offer fleeting perspectives on a world that reconfigures the tragedy and disconnection often found in narratives of American Indian life. The souls that populate Jensen's stories find tentative connections with the past, the future, one another, and finally the reader.

"Toni's highly individual voice substantially enriches the diversity of our department, and the vital importance of that voice cannot be applauded sufficiently," said William A. Quinn, chair of the Department of English, who nominated her. "Toni is an indefatigable activist for human rights and ecological sanity."

Quinn said that Jensen's highly personal insights into America's gun culture have "both poignantly local relevance and national significance. Hers is a heroically non-violent activism."

He added that Jensen has been particularly effective in "opposing corporate exploitation of Native American lands. She is a champion of both peace and sustainability."