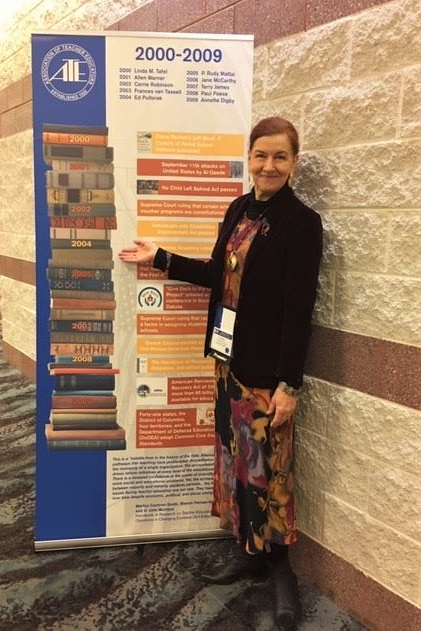 Professor Freddie Bowles poses next to an Association of Teacher Educators conference banner featuring the decade she became a member. Her first conference was in 2004 and she earned a Ph.D in 2007.

Freddie Bowles, associate professor of foreign language education at the University of Arkansas, has been named a distinguished member of the national Association of Teacher Educators, celebrating its 100th anniversary this year.

Bowles will receive the award at the 2021 annual conference in Anaheim, California.

"This is a huge honor in our association," said Bowles, who has been an active member for 15 years. "It's the only award that is voted on in the Delegate Assembly, which consists of the representatives from the membership at large."

Nominators cited her unwavering support of the association at the state and national level as well as her dedication to teacher education.

"Dr. Bowles consistently shares her expertise in language teaching and learning at the national, regional, and state levels through presentations and publications in addition to advising 20-plus students at the masters and doctoral levels," Vice Provost for Distance Education Cheryl Murphy wrote in a nomination letter. Murphy was head of the Curriculum & Instruction department at the U of A most recently and worked with Bowles. "She epitomizes the vision of ATE to promote advocacy, equity, leadership, and professionalism in all settings."

Bowles' involvement in the association spans both the state level and the national level, including serving on the board of directors and currently as the chair of the Association Development and Membership Committee.  She has also served as the president of the Arkansas association.

Nominators pointed to Bowles' many contributions to the U of A in the College of Education and Health Professions. She has developed three courses for foreign language licensure and five programs of study for new undergraduate degrees; has served as Program Coordinator of the Master of Arts in Teaching for six years; and is currently serving as the coordinator for the Bachelor of Arts in Teaching program. In the broader field of teacher education, Bowles has at least a dozen refereed publications, and another dozen non-refereed publications. She has received numerous grants for academic endeavors and has over 90 professional presentations to her credit.