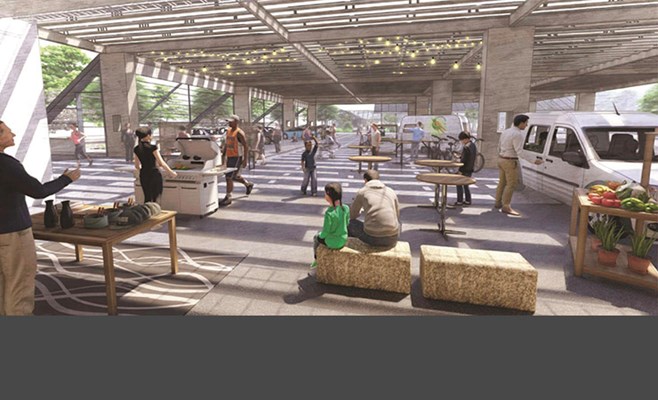 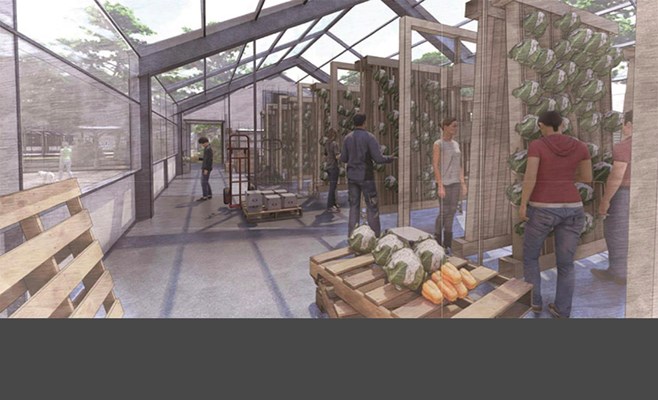 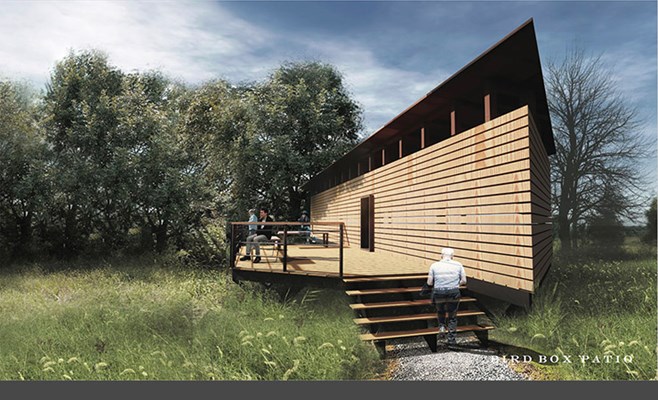 The Birdbox Patio, part of the “A Piece of Prairie” design. 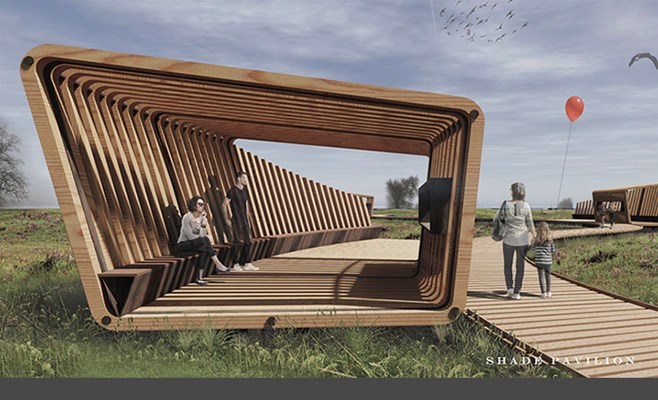 A shade pavilion in the “A Piece of Prairie” design. 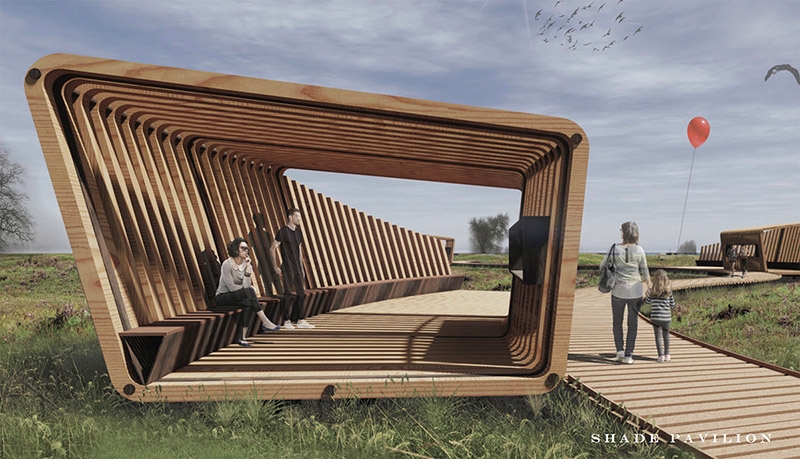 This shade pavilion is part of the "A Piece of Prairie" design, which received an Honor Award from the Central States Region of the American Society of Landscape Architects.

FAYETTEVILLE, Ark. – Design work by Ben Magee, Tamsan Mora, Jacob Costello and Jerry Ferreira, students and recent graduates of the Fay Jones School of Architecture and Design, has been recognized by the Central States Region of the American Society of Landscape Architects. The award-winning work was created by students in the landscape architecture and architecture programs.

Awards were announced June 25 during a virtual celebration for the 15th annual ASLA Central States Regional Conference. The conference was originally planned to take place in April in Omaha, Nebraska, but was rescheduled due to COVID-19.

Magee, Mora and Costello created their design "Tri Cycle Farms, Zip Farm" as part of a spring 2019 studio led by Ken McCown, head of the Department of Landscape Architecture, and Scott Biehle, a teaching assistant professor of landscape architecture.

In their landscape design, the team transformed a lot in Fayetteville into a zip farm while also examining the feasibility of the Living Building Challenge, a performance standard for projects that generate more energy than they consume. The farm's zipper concept pulls people inside a dynamic interplay between forest and water ecosystems, including food forests, wetlands, a living machine ecological sewage treatment system, hydroponic greenhouses and a greywater system. During the project, the students worked with professionals in the field of sustainability, including alumnae Meredith Hendricks of Entegrity (B.Arch. '01) and Lee Porter of Ozark Green Roofs (B.L.A. '11).

"The Zip Farm is significant because it shows interdisciplinary design innovation in the areas of brownfield remediation and the Living Building Challenge," McCown said. "The students' project is a 'proof of concept' that Living Buildings can be possible here as Net Zero buildings in energy and water use, as well as providing several health and community benefits, such as the use of local, non-toxic materials for construction and healthy places for people to live, work and play."

A Net Zero building produces as much energy as it uses over the course of a year.

Ferreira completed his "A Piece of Prairie" design as part of a fall 2019 studio led by Carl Smith, associate professor of landscape architecture.

In his design, Ferreira uses amenities and access points to connect the Fayetteville community to a remnant wet prairie west of Fayetteville while minimizing the disruption to the site. The project, which explores and addresses how the community will change in the future due to increased urbanization, includes a visitors center, pavilions, trails and ornithological observatory. The project also aims to reduce carbon emissions through a reduced carbon footprint, and it generates clean energy through wind turbines.

"The premise of the project was to situate this landscape in a developing suburban context: Where would we be — figuratively — in 2050, when the prairie might be surrounded by development, and a site of increasing infrastructural provision? What could be done to reconcile these landscape conditions, and what could be done to bring the community to the prairie?" Smith explained. "The students drew on sustainability and resilience ideas, but also a grounding in place theory and the work of 19th and 20th century landscape and environmental artists from Thomas Cole to Michael Heizer. There is rhetoric there, but it is prefigured by aesthetics and compositional judgment. The architecture on the site is absolutely original to the project."

In addition, Landscape Creations LLC, a landscape architecture firm based in Rogers, was one of only two firms from across the Central States Region to be awarded a Merit Award for Professional Residential Design at this year’s ASLA Central States Regional Conference. William C. Towle, principal and owner at Landscape Creations LLC, is a 2012 honors graduate of the Fay Jones School, with a Bachelor of Landscape Architecture and a minor in horticulture. This award was for the firm’s project Esculapia Hollow – Retransformation of an Ozark Woodland.