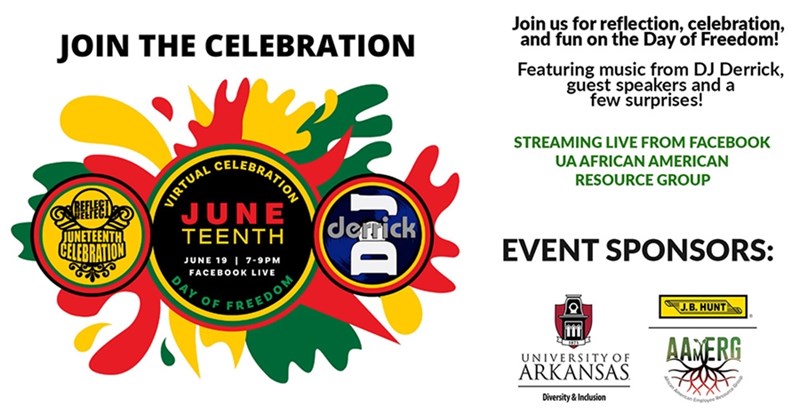 The activities include music by DJ Derrick. Ms. Ronetta J. Francis will discuss the importance of voting and the political climate in the African American community, Dr. Greta Jean and Dr. Rex Porte will provide feedback for healthy living. Chancellor Joseph Steinmetz and Dr. Yvette Murphy-Erby, vice chancellor for diversity and inclusion, will give opening remarks and welcome from the campus. Dr. Charles Robinson, provost and vice chancellor of student affairs, will talk about the history and significance of Juneteenth. Celebratory videos provided by community organizations will be shown and Juneteenth trivia will occur throughout the event with chances to win gift cards.

This event commemorates the anniversary of African American emancipation. Juneteenth today, celebrates African American freedom and achievement, while encouraging continuous self-development and respect for all cultures.

Juneteenth, or the "19th of June," is the oldest nationally celebrated commemoration of the ending of slavery in the United States. It recognizes June 19, 1865, in Galveston, Texas, when Union Gen. Gordon Granger announced freedom for all slaves in the Southwest. This was the last major vestige of slavery in the United States following the end of the Civil War. This occurred more than two and a half years after the Emancipation Proclamation was issued by President Abraham Lincoln. Upon the reading of General Order #3 by General Granger, the former slaves celebrated jubilantly, establishing America's second Independence Day Celebration and the oldest African American holiday observance. In 2006, the Arkansas Legislature first recognized Juneteenth as a state Memorial Day commemorated by the issuance of a proclamation from Gov. Mike Huckabee.

The event is sponsored by: The University of Arkansas Office for Diversity and Inclusion and African American Resource Group, JB Hunt and Uniq Productions.