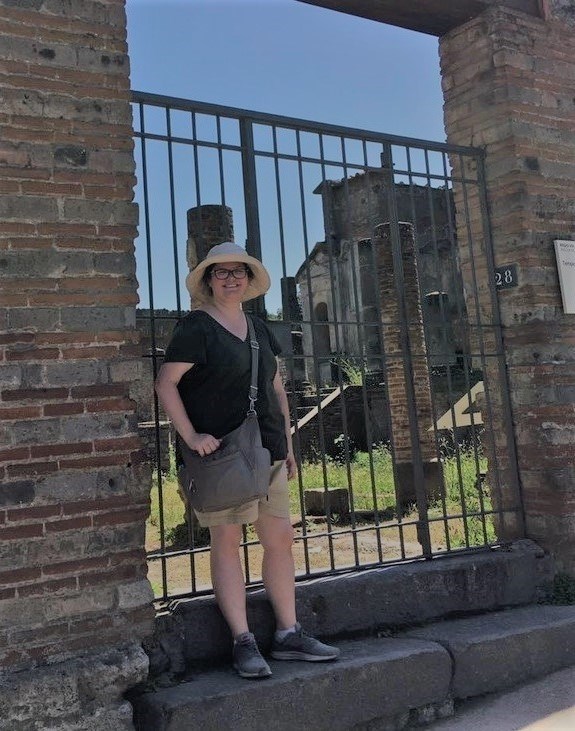 Kelsey Myers poses in front of the Temple of Isis at Pompeii, Italy while studying abroad on the Classics in Italy program in summer 2018. The site report Myers delivered on the temple helped to inspire her honors thesis research on Egyptian-themed imagery in non-domestic spaces in the Roman town.

Classical studies major Kelsey Myers, who graduated with honors from the J. William Fulbright College of Arts and Sciences this spring, took home the poster prize at last week's virtual meeting of the Classical Association of the Midwest and South (CAMWS).

Since CAMWS is the largest regional professional conference for Classics scholars and teachers, officially including 32 U.S. states and three Canadian provinces, Myers' achievement has generated high visibility for the Classical studies program at the University of Arkansas.

The poster, titled "Isis as a Commercial Goddess? An Analysis of Egyptian Imagery in Pompeian Shops and Workshops," was developed from a portion of Myers' honors thesis project.

She competed against other undergraduate students from prestigious Classics programs at St. Olaf College, Tulane University, Case Western University, and Washington and Lee University. In addition to designing the poster, she was asked to virtually present a 5-minute summary of her research project to a panel of judges.

The criteria used to determine the winner included quality of research, familiarity with recent scholarship, creativity and organizational skill, clarity and effectiveness of the presentation, and quick-wittedness and poise in responding to questions from the audience.

"As her mentor, watching Kelsey transform from a student into a scholar has been extremely gratifying," Vennarucci said. "Her research project makes an original contribution to the study of Egyptian imagery in Roman contexts, and her conference poster and presentation were both outstanding! She was especially impressive in the Q&A, demonstrating mastery over the textual sources, archaeological evidence, and secondary scholarship in her responses to leading scholars in the field. I am very proud of her success and look forward to celebrating her many future triumphs."

Myers was announced as the winner during the closing ceremonies of the conference, during which she was also recognized as a recipient of the James Ruebel Undergraduate Travel Award.

"It is exciting to see scholars from outside the college and institution engage with my research," Myers said. "I was surprised at first that there has been so much interest in this project because I feel like most of my research grew organically out of a combination of my own interest in ancient Egyptian culture and religion and everything I had been learning in my Classics courses for the past three and a half years. I can trace conversations in my thesis back to classes I took in Latin, ancient Greek, Roman Art and Archaeology, and even a class on Ancient Food and Drink as well as to conversations with my professors about their own research and work on the Virtual Pompeii Project. People sometimes question the relevance of my major, and it makes me feel validated that the interdisciplinary training and professional opportunities I received in Classical studies have helped my work get recognized at this level."

Myers, who is originally from Hot Springs, transferred to the University of Arkansas in 2017 to pursue a degree in Classical studies. She has served as president and treasurer of the local Beta Pi branch of the Eta Sigma Phi Classics honor society and was part of the Razorbacchae team that won the national Certamen championships at last year's Eta Sigma Phi convention.

Myers was recently been approached by the Ozark Historical Review with an invitation to publish a section of her thesis in one of their upcoming volumes. Next year, Myers will continue to work as lab manager for the Tesseract Center for Immersive Environments and Game Design while applying to graduate schools to study ancient history.

The University of Arkansas was well-represented at this year's virtual CAMWS. Classical Studies professors Vennarucci and Joy Reeber presented papers on Latin pedagogy and Roman poetry respectively while Nina Andersen, another recent graduate from Fulbright College with honors in Classical studies and national president of the Eta Sigma Phi Classics Honor Society, presided over the conference's Eta Sigma Phi reception.