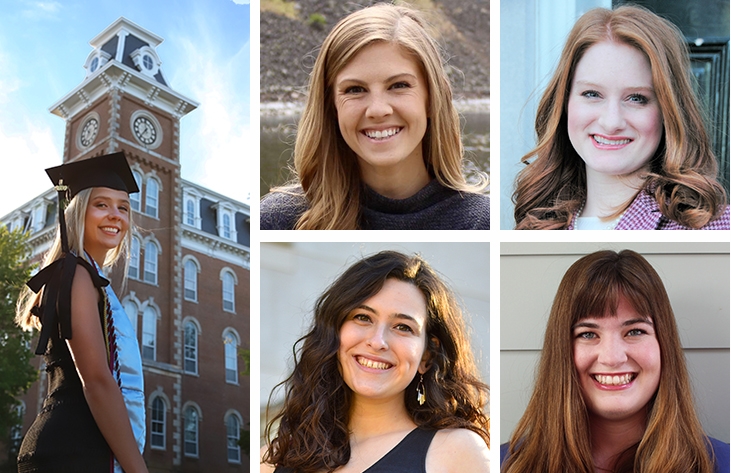 Student recipients of Fulbright awards are selected on the basis of academic and professional achievement, as well as their records of service and leadership potential in their respective fields. One alumnus and one current student were also named ETA alternates: Nathanael Garcia (2019 honors kinesiology, alternate to Thailand); and Yumi Ha (honors chemistry and Spanish May graduate, alternate to Italy).

As the U.S. government’s flagship international educational exchange program, the Fulbright is designed to build lasting connections between the people of the United States and those of other countries. The program is funded through an annual appropriation made by the U.S. Congress to the U.S. Department of State.

Participating governments and host institutions, corporations, and foundations around the world also provide direct and indirect support to the program, which operates in over 160 countries worldwide.

The five U of A students will join over 2,100 U.S. citizens who will study, conduct research, and teach abroad for the 2020-2021 academic year through the Fulbright U.S. Student Program.

“The importance of the Fulbright Program cannot be overstated,” said Todd Shields, dean of the J. William Fulbright College of Arts and Sciences. “It has launched student scholars and built international understanding for decades. That we have five scholars this year and two more who may also become scholars points to the amazing students we have on our campus. All of these students are exceptional and have been academically ambitious as well as leaders at the University of Arkansas and beyond it. They will be outstanding ambassadors for our state and for our country.”

Fulbright U.S. Student Grants typically begin in the fall semester. However, because of the U.S. Department of State’s Global Level 4 Health Advisory in response to COVID-19, these students’ awards will begin in January 2021.

Eleanor Henson is a 2020 honors May graduate with a bachelor’s degree in biological engineering in the College of Engineering with a sustainability minor.

She will use her Fulbright Study/Research Grant to pursue a master’s degree in the environment and sustainability program at the University of Saskatchewan in Saskatoon, Canada. Henson is an Honors College Fellow and an Arkansas Governor’s Distinguished Scholar.

On campus, Henson conducted research on green roofs with Benjamin Runkle, assistant professor of biological and agricultural engineering. In 2019, she received a Student Undergraduate Research Fellowship from the Arkansas Department of Higher Education to support her work. She also conducted research in aquatic ecology at Oak Ridge National Laboratory in Oak Ridge, Tennessee, as well as through a National Science Foundation Research Experience for Undergraduates in Fayetteville. Outside of research, she was involved with the Razorback Food Recovery Program since 2016, and served as a member of Tau Beta Pi Engineering Honors Society, the Biological Engineering Student Club, Honors College Ambassadors, the Society of Women Engineers, and the American Society of Agricultural and Biological Engineers. She plans a career in academia.

“Receiving a Fulbright U.S. Student Award is a humbling, life-changing opportunity, and I am excited to conduct cutting-edge research at the University of Saskatchewan in Canada,” said Henson. “This award will allow me to join an international community of like-minded scientists passionate about hydrology, and I am honored that I will be able to represent the University of Arkansas in the process. I would like to specifically thank my mentor, Dr. Benjamin Runkle, and the entire biological engineering department for providing the credentials and confidence to apply for this award.”

Lane Justus graduated in December 2019 with honors degrees in Latin American and Latino studies, political science, Spanish (Bachelor of Arts) and biology (Bachelor of Science) in the J. William Fulbright College of Arts and Sciences. She will complete her English Teaching Assistantship in Mexico. She received a 2017 Sturgis Study Abroad Grant to study in Costa Rica, as well as Honors College funding for her on-campus research.

Justus completed two honors theses, one investigating functional characterization of gill Na/K-ATPase in trout under Christian Tipsmark, associate professor of biological sciences, and the other focused on social determinants of teenage pregnancy in El Jobo, Costa Rica, under Steven Bell, professor of Spanish.

She taught English and Spanish courses in a variety of settings in the Northwest Arkansas area, including through the Sin Limites Biliteracy Program. She also volunteered and worked as a counselor at Camp Aldersgate, a Little Rock camp for children and youth with special needs. After pursuing a Ph.D. in biology, she plans a career in teaching and research as well as writing U.S. environmental policy.

“Being selected as a Fulbright Student is an honor, and I’m so grateful to have been chosen to represent a program prided for its impact across the world,” Justus said. “During my time at the University of Arkansas, I’ve had many opportunities to build bridges between cultures, and I’m ecstatic to continue connecting with others through language and shared values in Mexico. I’d also like to acknowledge some of the mentors who supported me and helped me prepare for my time serving with the Fulbright program throughout my college career: Ms. Betina Arellano, Drs. Christian Tipsmark, Fernando Riva, Steven Bell, Angel Ruiz Blanco, and Xavier Medina Vidal. Thank you all for helping me grow into a Fulbrighter.”

On campus, she researched network optimization with Kelly Sullivan, associate professor of industrial engineering. She served as social chair for Alpha Pi Mu Industrial Engineering Honor Society and was an active member of Tau Beta Pi Engineering Honor Society. She was also a founder of the Delta Gamma sorority on campus, serving as the director of scholarship. Rhomberg completed professional internships with two Arkansas-based companies, Arcbest and Dillard’s. In spring of 2019, she studied mathematics and statistics at the University of Newcastle in Callaghan, Australia, where she was an active member of the university’s Exchange Student Network. She plans to pursue a Ph.D.

“I greatly admire the Fulbright program because it engages people all over the world through education, the arts, and diplomacy,” said Rhomberg. “As someone with both technical and artistic passions in engineering and music, I cannot wait to see the roots of modern engineering in Belgium and the rich history and music of Europe I have studied throughout the years. It is an honor to continue the spirit of Senator Fulbright, who also graduated from the U of A and was a native of Arkansas.”

Maya Ungar, an honors French, international and global studies, and political science 2020 May graduate in the J. William Fulbright College of Arts and Sciences, was awarded an English Teaching Assistantship in Sri Lanka. She is a Sturgis Fellow, a Governor’s Distinguished Scholar, and a Presidential Fellow.

On campus, Ungar has researched post-genocide activism with Laurence Hare, associate professor of history, and was awarded a 2019 Student Undergraduate Research Fellowship to support her work. She also presented and published research at the Center for the Study of Congress and the Presidency, for which she received the Richard H. Solomon Award for Most Original Paper on Foreign Policy or Diplomacy.

Ungar served as president and co-founder of Co-Exist, a religious diversity student organization, and she has also served as a Fulbright College Honors peer mentor, as well as vice president and secretary of Hillel. She completed internships with the U.S. Department of State’s Office of Western European Affairs, Churches for Middle East Peace, and Peace Corps. She has studied abroad in Denmark, France, and Thailand, and she plans a career with the Foreign Service.

“I am extremely grateful to have been selected for a Fulbright grant, and could not have done it without the help of the staff at the Office of Nationally Competitive Awards and my mentor, Dr. Hare,” said Ungar. “I am excited to move to Sri Lanka and continue the legacy of international exchange that has been an instrumental part of my undergraduate career as a member of the Fulbright College of Arts and Sciences.”

Rebecca Yeager is completing a master of arts in teaching in elementary education in the College of Education and Health Professions, and in 2019 she graduated with an honors degree in childhood education. Yeager is the recipient of a Master of Arts in Teaching Endowed Scholarship. She will complete her English Teaching Assistantship in The Netherlands.

As an undergraduate, Yeager performed research with Marcia Imbeau, professor of gifted education, investigating preservice teachers’ knowledge of diversity and multicultural literature. Yeager is the founder of the Future Teachers of English Language Arts student club. As an undergraduate, she worked as an orientation assistant for the College of Education and Health Professions and as a writing tutor for CLASS-plus, as well as volunteered as a Student Ambassador.

She has been heavily involved with the Volunteer Action Center’s Passionate About Learning Program, an initiative that promotes literacy in Northwest Arkansas schools, serving both as a tutor and a curriculum consultant. She has experience teaching in international settings, volunteering in classrooms in both Belize and Ireland. She plans a career as a teacher, focusing specifically on English Language Arts in kindergarten through eighth grade classrooms.

“I am excited about traveling to the Netherlands to represent the United States and the University of Arkansas, and I am grateful for the professors and other faculty and staff who have helped make this honor possible,” Yeager said.  “I look forward to the many relationships I will form with teachers and students abroad.”

The application for 2021-22 Fulbright U.S. Student Program Awards is now available online. Opportunities are available for graduating seniors and current graduate students of all fields of study.

The campus deadline for University of Arkansas applicants will be Thursday, Sept. 17, 2020. Jonathan Langley, associate director for the Office of Nationally Competitive Awards, serves as the campus’ Fulbright Program Advisor.

About the Fulbright Program: Since its establishment in 1946 under legislation introduced by the late U.S. Senator J. William Fulbright of Arkansas, the Fulbright Program has given more than 390,000 students, scholars, teachers, artists, and professionals of all backgrounds and fields the opportunity to study, teach and conduct research, exchange ideas, and contribute to finding solutions to shared international concerns.