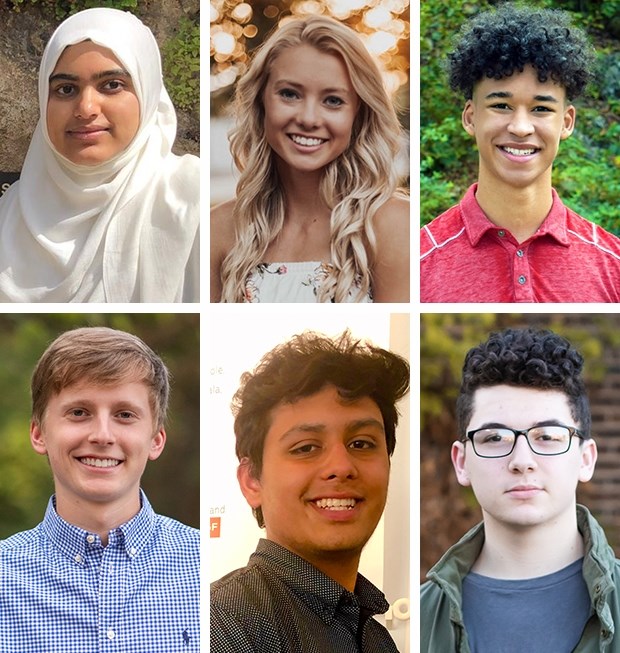 FAYETTEVILLE, Ark. – The University of Arkansas Honors College has selected six incoming freshmen as the recipients of this year’s Bodenhamer Fellowships.

The Bodenhamer Fellowship is one of the most prestigious scholarships the university offers to undergraduates, awarding each student $72,000 over the four-year course of their education.

The fellowship, now in its 22nd year, cultivates a strong sense of community among current and alumni recipients as they pursue an impressive range of careers and graduate and professional degrees.

The 2020 Bodenhamer Fellows are:

This year’s group embraces a wide range of interests and skills, from theater and politics to basketball and biological research.

“I am thrilled to welcome the Bodenhamer class of 2024 to the Honors College,” said Honors College Dean Lynda Coon. “They come to us with an impressive portfolio of research, entrepreneurship and community engagement. Their presence on campus will be a vital one, fanning out into varied academic disciplines and leadership positions. I am especially pleased to see the ways in which this new ‘Bodie’ class has already made contacts with Bodenhamer alumni, an international network of innovators and intellectuals.”

The Bodenhamer Foundation, created by Lee Bodenhamer (B.S.B.A.’57, M.B.A.’61, both at U of A, and D.B.A.’68 Harvard), established the Bodenhamer Fellowships in 1998. Students must score at least a 32 on the ACT and have a grade point average of 3.8 or higher in order to be eligible for the award. Community service, extracurricular activities and evidence of intellectual curiosity, leadership and creativity are also considered in the selection process.

In addition to covering the normal cost of attending the university, the fellowship may be used for study abroad, attendance at professional and educational conferences, research and any special equipment that fellows may need.

The new Bodenhamer Fellows will join a group of 150 current and alumni fellows who have benefited from the generous support of the Bodenhamer family. Alumni fellows are excelling in a wide range of career paths, from cybersecurity to opera performance to research on breast cancer metastasis. Many are pursuing advanced degrees at universities such as Harvard, Yale and Vanderbilt.

The summer trip, an annual tradition funded by Lee Bodenhamer that helps build bonds among the new Bodenhamer fellows, has been postponed for incoming fellows due to the COVID-19 pandemic.

Khadeeja Asif is a graduate of Bentonville High School where she was co-president of the HOSA Future Health Professionals Club and co-captain of the Academic Competition for Excellence Team. She is a National Merit Finalist, an AP Scholar with Distinction and a National AP Scholar. Asif placed first in human growth and development at the HOSA Future Health Professionals State Conference, second in statistics at the Arkansas Council of Teachers of Mathematics Regional Conference and second in Accounting II at the Future Business Leaders of America Regional Conference.

Asif participated in Medical Applications of Science for Health, a competitive program that allowed her to shadow medical professionals in the fields of pediatrics, family medicine, cardiology and gastrology, among others. She also job-shadowed at the Mechanisms of Cognition and Attention Lab at the University of Arkansas in pursuit of her interests in neuroscience and psychology.

Asif volunteered at the Bentonville Public Library, where she served on the Teen Advisory Board as well as on the Board of Directors of the Bentonville Library Foundation. She also volunteered at Mercy Hospital and Clinic and plans to be a pre-medical student at the university. She is the daughter of Asif Parwez and Saba Asif.

Emma Hulbert graduated from Siloam Springs High School, where she was a member of the National Honor Society and Mu Alpha Theta, the national mathematics honor society. She was an active member of student council for several years and is a National Merit Finalist.

Hulbert has been a competitive and recreational cheerleader for 11 years and was selected to be an All-American Cheerleader three times. She also served as team captain of her cross-country team and won several track awards. She has been an Uplink mentor for two years, during which she mentored freshman students at her school.

She tutored men and women at the Dogwood Literacy Council, helping two of them gain United States citizenship. She has taken part in three mission trips around the United States, during which she served at-risk families and children, and volunteered often at the Community Christian Fellowship Nursery. She plans to major in biomedical engineering. She is the daughter of Arthur and Janet Hulbert.

While attending Boys State in 2019, Jackson was a semifinalist for governor. He twice won third place out of 32 teams in two separate international Odyssey of the Mind competitions and also received one of only three Ranatra Fusca awards while competing in an Odyssey of the Mind regional competition during his freshman year.

Jackson is an avid basketball player and served as a member of his school’s basketball team for six years. He spent approximately 200 hours job-shadowing an orthopedic surgeon last summer at St. Bernard’s Hospital, and has been an active member of Sutton’s Free Will Baptist Church and his youth ministry group for six years. He plans to major in biology. He is the son of Gary and Amy Jackson.

James “Jed” Johnson is a graduate of Episcopal Collegiate School in Little Rock, where he served as president of the Spanish Club and Mu Alpha Theta. He also served as vice president of the school honor council and was an active member of the National Honor Society.

Johnson is a National Merit Finalist, an AP Scholar with Honor, and a gold medalist on the National Spanish Exam, in which he placed second in the state of Arkansas his sophomore year and third in his freshman and junior years. Johnson also competed in Quiz Bowl, was the team co-caption for varsity cross-country and was a three-time All-State cross-country runner. He also played varsity golf and baseball.

Johnson was one of four students at his school awarded a summer research internship as part of the Stella Boyle Smith Trust Summer Science Scholars Program, through which he had the opportunity to work as a lab technician at the UAMS Winthrop P. Rockefeller Cancer Institute. He plans to major in biochemistry and minor in Spanish. He is the son of Jim and Suzanne Johnson.

Anshuman Nandy graduated from Haas Hall Academy in Fayetteville, where he served as online editor of the school newspaper and as president of Mu Alpha Theta. Nandy was captain of his Quiz Bowl Team and helped lead them to a state runner-up award and state championship. He was also head delegate of Model United Nations and won Best Delegate awards four times and Best Delegation awards twice at various conferences.

A Future Business Leaders of America member, he won a regional computer business competition. He was also an Envirothon Applied Topics leader and Green Team member. Nandy was a machine learning researcher at the University of Arkansas and volunteered regularly at Fayetteville Public Library. He plans to major in computer science and business management. He is the son of Soumen Nandy and Anjana Mukhopadhyaya.

Parker Williams graduated from Magnolia High School, where he served as president of the Youth Advisory Council and was the only student to have ever scored a composite 36 on the ACT. He is a member of the National Honor Society. He is also a member of Today’s Youth, Tomorrow’s Leaders, a program sponsored by leaders in his county that selects students from county schools every year to attend monthly sessions with leaders in the community.

As a freshman, Williams won the overall first place award at a regional science fair. An avid thespian and singer, he has been an active member of community theater since he was 9 years old and is usually involved in at least one show each year. He was elected to be secretary of the choral department and regularly works with directors and other members of the student board. He was also awarded the opportunity to travel to New York City to participate in the National Youth Choir. Williams attended Medical Application of Sciences for Health camp, during which he spent two weeks at a hospital learning from and observing people in a field he hopes to join. He plans to one day become a surgeon and will be a pre-medical student at the university. He is the son of Lori Williams.

About the Honors College: The University of Arkansas Honors College was established in 2002 and unites the university’s top undergraduate students and professors in a learning environment characterized by discovery, creativity and service. Each year the Honors College awards up to 90 freshman fellowships that provide $72,000 over four years and more than $1 million in undergraduate research and study abroad grants. The Honors College is nationally recognized for the high caliber of students it admits and graduates. Honors students enjoy small, in-depth classes, and programs are offered in all disciplines, tailored to students’ academic interests, with interdisciplinary collaborations encouraged. Fifty percent of Honors College graduates have studied abroad – three times the national average – and 100 percent of them have engaged in mentored research.