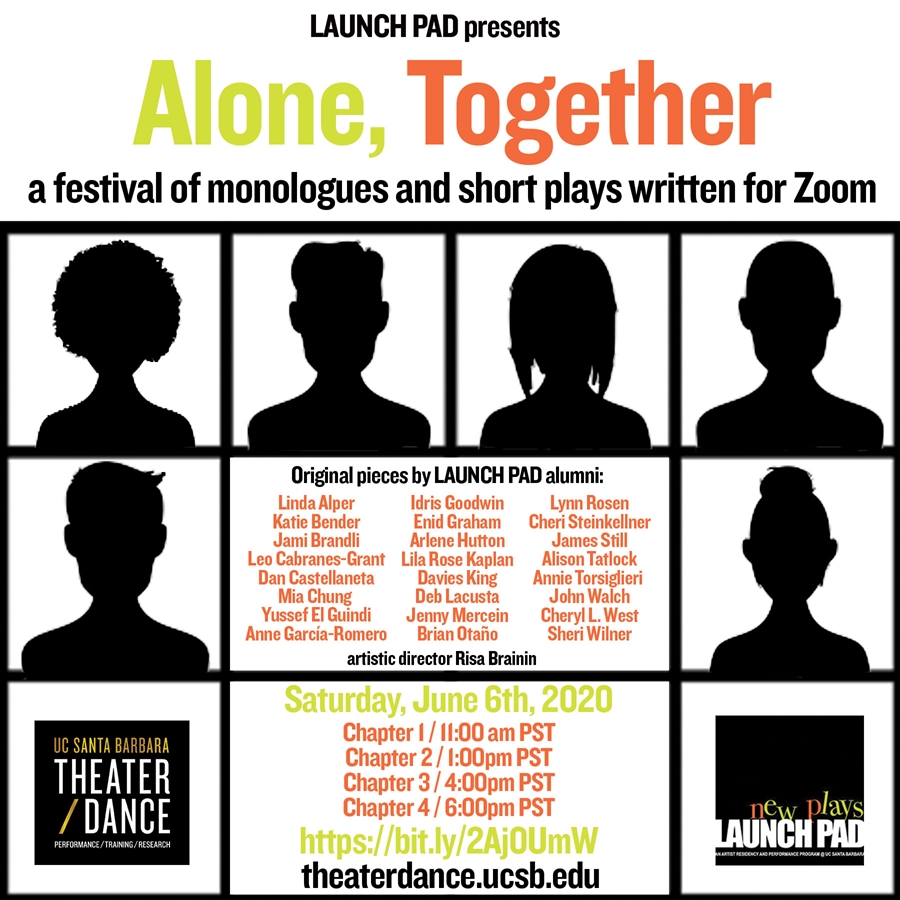 A new short play called 2084 by John Walch, assistant professor in the Department of Theatre, will be performed at 11 a.m. (PST) Saturday, June 6 as part of the free Alone, Together festival of monologues and short plays commissioned and written specially for the digital stage.

Alone, Together, hosted by Launch Pad and University of California Santa Barbara, features 39 new works from 24 playwrights, including Walch, which will be streamed for free live on Zoom.

The plays are performed by UCSB students and guest artists, and can be viewed for free on Zoom starting at 11 a.m. Saturday, June 6. The plays will be performed in "chapters" with Walch's short play 2084 performed during Chapter One.

"John's a long-trusted collaborator and I'm thrilled to have him as part of such an incredible group of nationally recognized playwrights," said Risa Brainin, artistic director of Launch Pad.

Walch, head of the U of A's M.F.A. Playwriting Program, said his 2084 "is a dystopian absurdist blend."

Riffing on Orwell's classic Ninety Eighty-Four, the play imagines a future where all online communication is recorded and logged, and an attempt by one cursed user to persuade a customer service agent to remove — or "drop in the memory hole" — one personally embarrassing file.

Walch says of the play: "The impulse that I started with was simply: 'Help.' It evolved from there to 'How do we seek help from others, especially when the power dynamic is skewed to those whom we are asking?' This took me to customer service agents on the lighter side and Orwell on the more dystopian side, and got me thinking about what happens when those who work within systems designed ostensibly to help those in need — the vulnerable and cursed — are operating to consolidate their own authority."

Walch said the play was written specifically for the digital stage, so it embraces the corresponding lack of shared physical space and place.

"Theatre artists are historically adept at dealing with limitations - place being chief among them - with troupes of itinerant 'players' travelling from town to town and creating makeshift stages as best as they could," Walch said. "Would I rather be in a shared room together? Yes. Would I rather there be no new work for the theatre being created and performed? No. So, I'm embracing the player's mindset in this moment and creating work for the platforms we can perform on."

UCSB professor Annie Torsiglieri agreed, adding that "With the devastating loss of face-to-face instruction and productions, we wanted to find a way to keep the work alive during this ongoing crisis. We decided we needed scripts meant to be performed in a virtual, online theater. We wanted to embrace the limitations."

Walch said he sees his graduate playwrights and theatre graduates doing the same thing, “they’re still definitely writing pieces for the stage, but are also seeing how they can adjust and make something in this moment, whether that be in a digital space or on curbsides across the city. Theatre makers find ways to make."