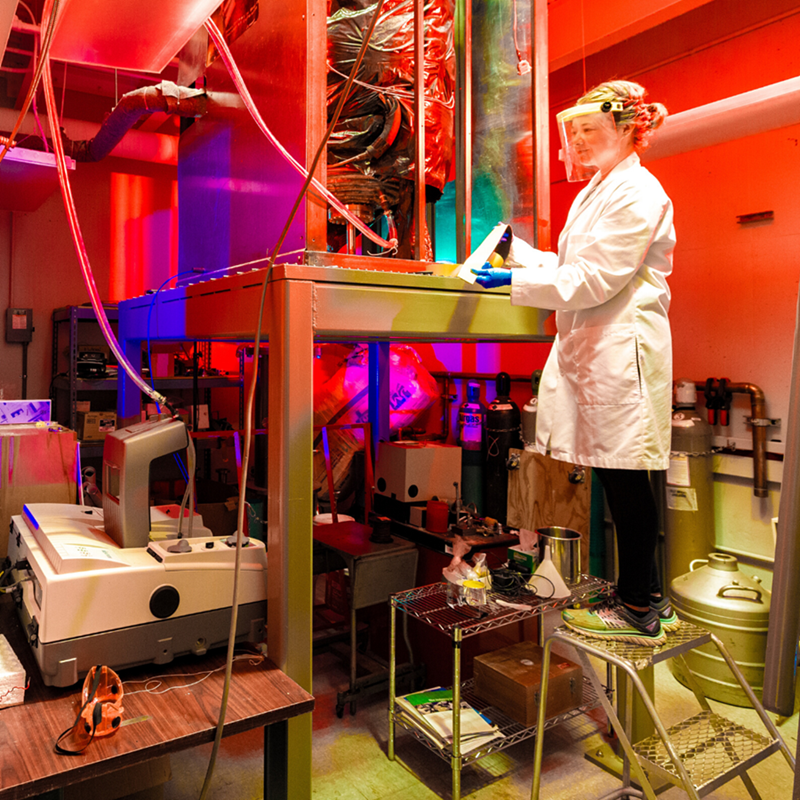 The name association with a famous female explorer was a validating moment, Czaplinski said. "To be associated with a world-renowned scientist and explorer like Amelia Earhart, who is considered a pioneer in exploration for women, is a high honor for someone like me," Czaplinski said.

Exploration in science and in nature is something that inspired Czaplinski to pursue her education in space exploration. After an early fascination with space documentaries, Czaplinski began her studies in the field of astrophysics. After two years of undergraduate work, a new opportunity in planetary science emerged, and Czaplinski took the leap.

She graduated from Purdue University in 2016 with a B.S. in Planetary Science and a concentration in geology. Her undergraduate research involved creating a global survey of slipface features on Martian sand dunes.

She entered the U of A Center for Space and Planetary Sciences graduate program in fall 2016 as a Ph.D. student. Czaplinski's current research involves using the W. M. Keck Laboratory Titan simulations chamber to constrain the composition and spectral properties of evaporite deposits on the surface of Titan. "Sometimes when I look at my data and my results, I see something that no one has ever seen before, and that makes me want to learn more," she said.

As a National Aeronautics and Space Administration Earth and Space Science Fellow for the last three years, Czaplinski has worked closely with faculty and researchers on unique projects. She hopes to participate in spacecraft missions and recently completed a complex application process to participate as an astronaut with NASA.

More than twelve thousand applicants apply for just a handful of positions. "Not a lot of other programs do experimental work like we do here," said Czaplinski, who hopes the practical experience she gets through the university program sets her apart from other candidates. Czaplinski even had a chance to meet NASA Administrator Jim Bridenstine during his visit to the U of A College of Engineering in 2019, continuing a long partnership between the university and the agency.

The interdisciplinary Space and Planetary Sciences degree program is designed to offer unique training for individuals who want to pursue competitive careers in the space and planetary sciences including positions with civilian, industry and military space endeavors.

The research center, located in the lower level of Ferritor Hall, houses research chambers for Mars, Pluto, Venus and Titan where students can create realistic scenarios to test materials and processes in similar conditions to live space.

The novel experiences within the program have given Czaplinski the opportunity to research most specifically about Titan, Saturn's largest moon. Titan is the only place in the solar system besides Earth known to have liquid rivers, lakes and seas. It is far too cold (about minus 290 degrees Fahrenheit) for liquid water, though scientists believe the moon may have a water ocean below its crust. Instead, the surface liquids are a mixture of methane and ethane, both of which are gases on Earth.

Understanding the compositional structure of the lakes and seas is important, as future NASA missions to Titan could include sending a boat or submarine for further exploration.

Vincent Chevrier, research assistant professor in the Arkansas Center for Space and Planetary Sciences, serves as advisor to Czaplinski. "Ellen is an excellent student. She is definitively a leader among our students and will probably be one in the field," Chevrier said.

"Students really respect her opinion," Chevrier said. "She is also extremely driven to succeed in her career and takes all the appropriate steps to build her knowledge and expertise," adding that Czaplinski has done several internships with NASA to develop knowledge about mission development and spacecraft engineering.

"She is an exceptional student and I am really glad I can work with her," Chevrier said.