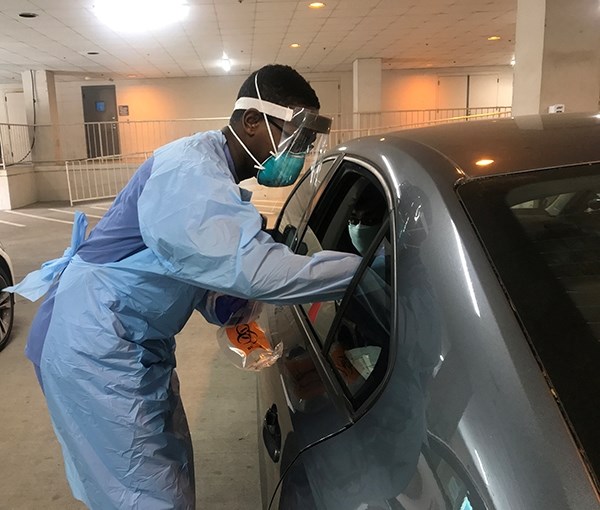 Private Allen Smith, a biological sciences pre-med major and member of the Army branch of the Arkansas National Guard, takes a swab of a drive-through patient for testing at the University of Arkansas for Medical Sciences.

When Gov. Asa Hutchinson called up National Guard medical units to help hospitals deal with an influx of people seeking treatment for COVID-19, staff and students from the University of Arkansas answered the call.

Eric Pipkin, the manager of design services for the university, is a chief master sergeant with 27 years service in the Arkansas Army National Guard. He was called up as part of a medical unit to help the Arkansas Department of Health in Little Rock initially, but as the emergency rooms began to fill with people wanting to be tested for the coronavirus, the troops were reposted to help with screening at the University of Arkansas for Medical Sciences.

The work they do is literally on the front line of the epidemic, meeting people as they drive onto the hospital grounds, taking their temperatures and asking a series of questions to help determine whether they need to be tested. Do you have any immuno-deficiencies? How about symptoms like a headache or loss of taste? Have you been exposed to someone who does have COVID-19?

A high temperature or exposure to an infected person are often automatic tests, but getting a sense of each person's general wellness helps as well.

"When we got there, we originally had three 2-man shifts," Pipkin said. But as patient numbers increased, the National Guard asked for troops to volunteer, and they expanded their staffing by early April to four 4-man shifts, giving everyone a little more breathing room.

Airman Ayana Thompson, a freshman at the university, stepped up.

"I never anticipated anything like COVID-19," she said about joining the Air National Guard. "When I was asked to volunteer, I said of course. I would do anything to help."

She said she had been debating what to major in during her first year at the university, but her experience working with fellow medics and the hospital doctors has her leaning strongly toward the public health major in the College of Education and Health Professions.

The National Guard troops also have provided additional help to various communities whenever a bump in cases is noticed through mobile triage. A crew of four — a driver, nurse and two medics — packs a van with test gear and personal protection equipment and heads out to help, everywhere from Mountain Home to Dumas and from Texarkana to Marianna.

Private Allen Smith, a freshman biology pre-med major from Pine Bluff, said they've been seeing 150 to 180 people a day although it slows down a bit on the weekends.

When there's a lull, he enjoys talking with the doctors and fellow National Guard medics on his shift. There's someone new each day and getting to know them has been fulfilling. That same gregariousness leads him to enjoy meeting the patients coming to the hospital.

"I personally enjoy interacting with the people, especially people who are a little worried about the covid thing," he said. "Talking with them helps reduce that worry and lets them know that things are going to be OK."

Medical personnel including National Guard medics work with patients in a drive-through testing center at the University of Arkansas for Medical Sciences in Little Rock.