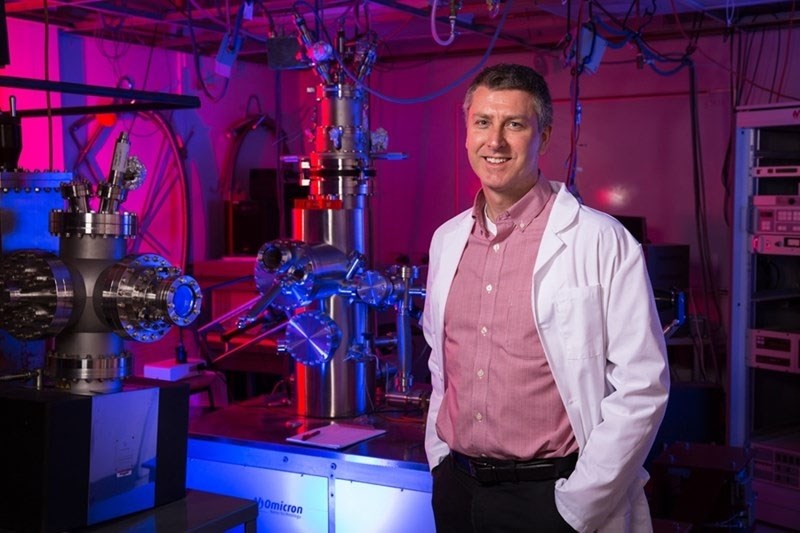 Physics professor Paul Thibado's research led him to the discovery that naturally occurring graphene vibrations can be used to generate electricity.

FAYETTEVILLE, Ark. – The Chancellor’s Commercialization Fund has provided more than $1.3 million in funding to University of Arkansas researchers seeking to bring new technologies to the marketplace.

Established in March 2019, the fund has awarded 33 grants ranging anywhere from $5,000 to $50,000. The fund prioritizes aggressive teams with mature projects who are “progressing technologies toward real-world applications, providing critical, commercially relevant data or developing working prototypes.”

These grants have been used to provide support for postdoctoral students, graduate assistants, materials, travel expenses and other costs.

The $1 million annually allotted to the Commercialization Fund was made possible by a larger $23.7 million gift from the Walton Family Charitable Support Foundation to support research and economic development at the university and is administered by the Office of Economic Development.

One goal of the gift is to increase the university’s research volume by investing in highly productive faculty, research infrastructure and signature research areas developed by the Office of Research and Innovation.

As Chancellor Joe Steinmetz wrote in his Focus on the Future series, “Simply stated, the higher your research volume, or expenditures, the more likely you are to generate intellectual property with commercial applications.” As such, the grant also provides for additional investment in staff, programs, operations and outreach related to economic development and the commercialization of research.

Stacy Leeds, vice chancellor for economic development, said of the Commercialization Fund, “As envisioned, dozens of faculty have been able to transform an idea toward real-world application, often in partnership with a private sector partner."

One recipient of a commercialization grant was physics professor Paul Thibado, whose research led him to the discovery that naturally occurring graphene vibrations can be used to generate electricity.

Thibado saw there were commercial applications, but they involved designing and manufacturing silicon-based circuits, which was outside his area of expertise. Thibado explained, “Having access to the commercialization funds enabled me to bring others in to move the project forward. As a result, we are much closer to successfully developing a chip that can power miniature devices without using batteries.”

The Commercialization Fund is a subset of the larger Chancellor’s Fund. Three other funding categories are also available to U of A faculty: the Innovation and Collaboration Fund, which provides seed funding to support bold thinking and risk taking in connection with the university’s signature research areas; the Gap Fund, which provides start-up support for teams that have completed National I-Corps training; and the Humanities and Performing Arts Fund, which supports creative activity and innovation in the humanities and performing arts.