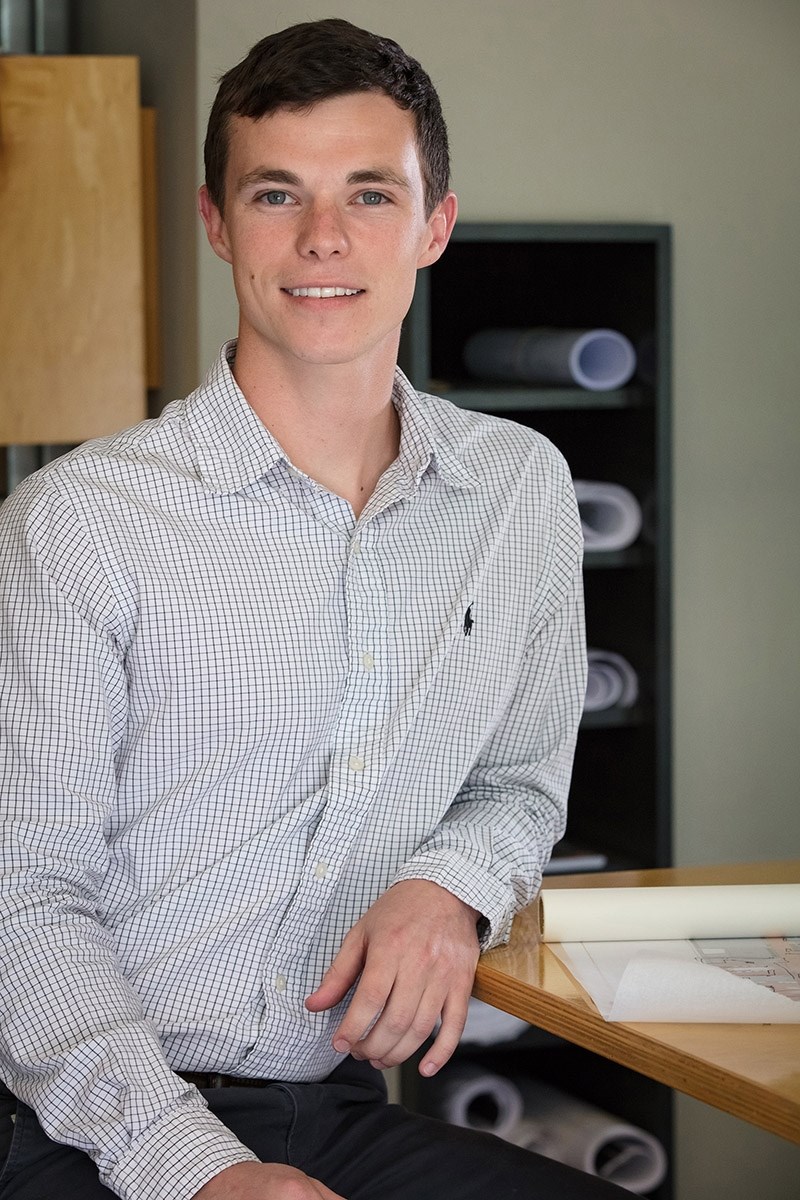 David Sweere, a fifth-year architecture student in the Fay Jones School of Architecture and Design and an Honors College student, is the recipient of the 2019 Aydelott Prize.

FAYETTEVILLE, Ark. – David Sweere, a University of Arkansas architecture student, has been selected as the recipient of the 2019 Aydelott Prize, the top honor in a four-university travel research program.

Sweere, from Maumelle, is a fifth-year architecture student in the Fay Jones School of Architecture and Design and an Honors College student.

Following their travels, each award recipient is required to submit an essay about their research. One student from those four projects is selected to receive the Aydelott Prize. Both awards are supported by the Alfred Lewis Aydelott, FAIA, and Hope Galloway Aydelott Award Support Fund. The 2016 call for proposals was the inaugural year of the Aydelott Travel Award and the Aydelott Prize program.

"The Aydelott Prize and Travel Awards program is a superb means of recognizing the excellence of architecture education and architecture students away from the presumed centers of architecture culture," said Peter MacKeith, dean of the Fay Jones School. "Here in the heartland, in these four great schools, there is both a legacy and a contemporary vitality of design talent: hard-working, thoughtful, authentic and sophisticated at the same time. David Sweere is the epitome of such a student, and the award of the Aydelott Prize to him after his summer of travel, sketching, writing and reflecting on the nature of architecture is definitive confirmation of his abilities and his promise in architecture. His proposal augured well for such an accomplishment, and the overall documents and material resulting from his creative and intellectual journeys are superb. The entire faculty and staff of the school join me in congratulations to this leading student."

For his research, "An Emotional Reconstructive Architecture," Sweere focused on the interior sensory experiences of architecture that are derived from place, and how these spaces have the power to move people on emotional and spiritual levels.

During his travels and research, Sweere received counsel from Robert McCarter, Kenneth Frampton and Juhani Pallasmaa, all architects and design educators who have a relationship with the Fay Jones School.

Jurors for the 2019 Aydelott Prize were Robert Ivy, executive vice president and chief executive officer of the American Institute of Architects; Frances Anderton, a host of DnA: Design and Architecture, a weekly radio show broadcast on KCRW NPR station in Los Angeles; and Carter Wiseman, a journalist and instructor at the Yale School of Architecture and former architectural critic for New York magazine.

During their deliberations, jury members focused primarily on the writing itself, although most essays contained rich illustration. One juror looked for a type of "thematic consistency" that might yield a more "thoughtful, more penetrating analysis," a quality that the juror found most effective in Sweere's essay. The jury said that Sweere's essay "combined effective graphics, both stunning drawings and photography, with its well elaborated subject in a coherent, accessible essay that continually drew a reader and the jury back."

Sweere said he was "thrilled" to learn he'd won the overall Aydelott Prize.

"I knew that I worked really hard on it and put everything that I had into it," he said. "But the competition was stiff."

He structured his 103-page essay of narrative, photographs and sketches into four reports that covered each building. He learned how to set up such a project through professor Noah Billig, his Honors Capstone project chair. In particular, Sweere learned to sketch and write descriptively about architecture and design. Sweere said that it was during his semester studying abroad in Rome in spring 2018 that he developed the skill of drawing emotively and with feeling under the mentorship of Winifred Elysse Newman, former architecture department head.

"There's a subtlety in every mark that goes into the feeling and your interpretation of the place," he said. "So you can relay it better I think through drawings than photographs, but you also experience it more fully yourself through forcing yourself to draw it, and draw it again and again and again."

Sweere said that his solo travels to more than a dozen countries last summer during his research brought the greatest personal growth he's experienced. As a designer, he came to know these designed spaces in a special way.

"It was already the architecture that I was most interested in because of these place-based qualities, because of the light quality that these buildings have," Sweere said. "But getting to go and experience them, it gives you another level of attachment to the buildings so you really get to know what they are all about. And you can start to flesh out where the ideas came from that the architect was working with."

Marlon Blackwell, professor and the E. Fay Jones Chair in Architecture, served as Sweere's mentor for this project. He said that Sweere possessed a "certain fearlessness" when combining the real-life experience of his journey with the documentation of that journey through his narrative and drawings.

"In many ways, he was trying to find a connection between ideas and emotions in the experience of profound architectural works," Blackwell said. "I really admire that. It's a tall order, especially for a relatively young designer and student."

Blackwell was impressed by the range of architectural works Sweere selected for his travel research, as well as his insights and his well-developed final report and public presentation of that research.

"David has very good creative instincts," Blackwell said. "He has a disciplined imagination, and he has a real sense of purpose in everything that he does. I think that's what sets him apart."

During professor Jeff Shannon's tenure as dean of the Fay Jones School, he and the architecture school deans from the other three universities began the conversation with Al Aydelott about this travel award program and worked with him to establish the rules for it. He praised Sweere's accomplishment.

"If there's such a thing as a magic triangle of great student characteristics, David has them all — and that would include talent, intelligence and motivation," Shannon said. "And he's got them all in abundance. He's been a great student; he's a great designer. And he has superior motivation to succeed."

Laura Terry, an associate professor of architecture, taught Sweere in first-year studio and helped him through the application process for the Aydelott travel award.

"David is that student who discovered his love of architecture through drawing, through travel and through the ineffable wisdom that those two things instill," she said. "From his first semester, it was clear that he saw the world through different lenses than most. It will be a joy to see him flourish."

Greg Herman, associate professor of architecture, served as a mentor and critic for Sweere during this project.

"David's exemplary sensitivity to the environment, coupled with his intelligent approach to his work, and desire to experience architecture on a global scale, all contributed to his success in this endeavor," Herman said. "It was my sincere pleasure to work with him, and I am assured of his continuing success."