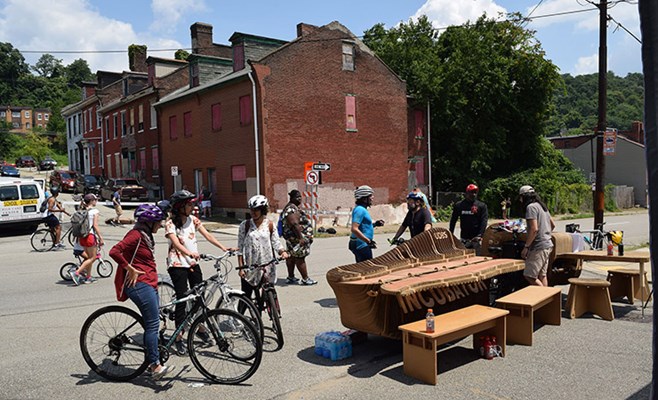 Home Incubator is used to enhance communication with community members about housing-related issues specific to Pittsburgh. 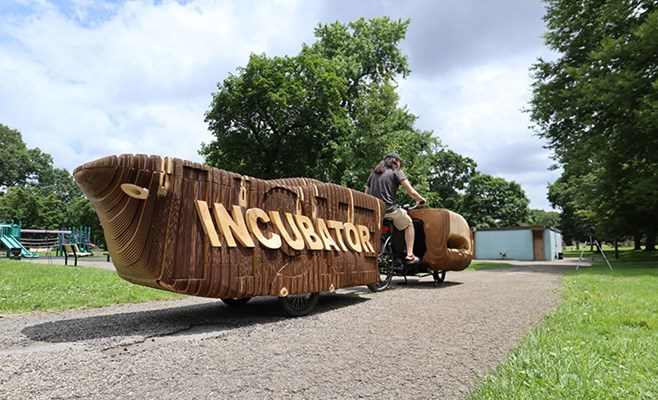 Home Incubator is a mobile community engagement tool that won an AIA Pennsylvania Bronze Award and a Design Pittsburgh Certificate of Merit. 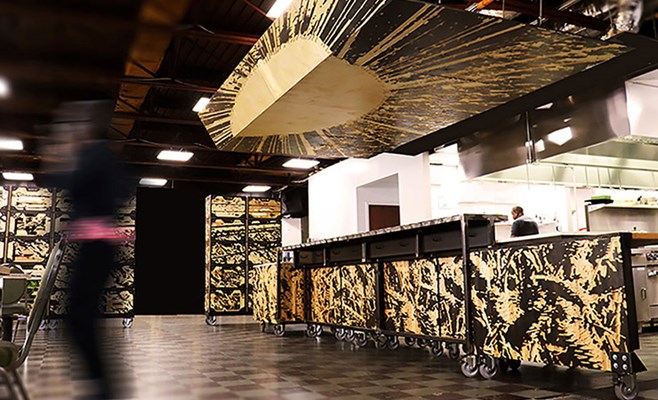 The Millvale Moose project is an adaptive reuse of an abandoned Moose Lodge in Millvale, Pennsylvania. 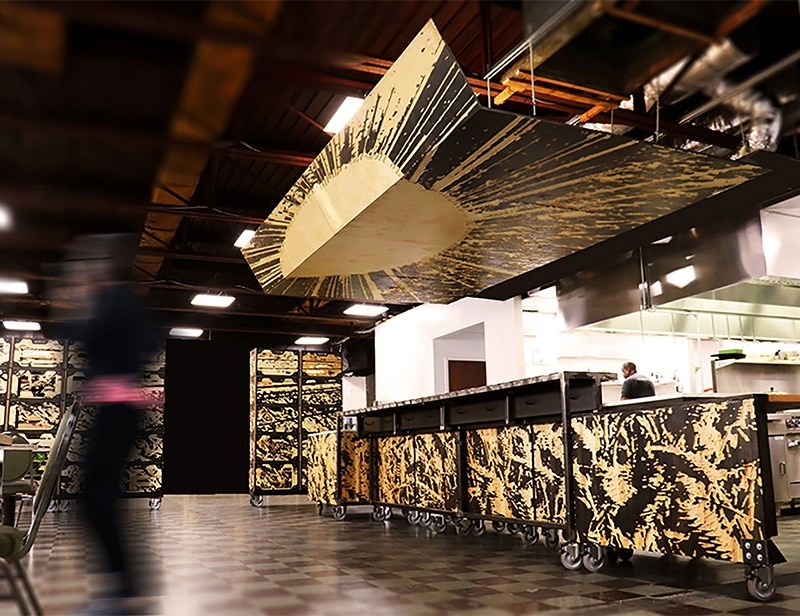 Millvale Moose is an adaptive reuse project that won an AIA Pennsylvania Honor Award and a Design Pittsburgh Certificate of Merit.

FAYETTEVILLE, Ark. – Two projects led by John Folan, a University of Arkansas professor and the 2018-2019 AIAS Educator Honor Award recipient, earned design awards from both the Pennsylvania and Pittsburgh chapters of the American Institute of Architects.

Folan, the recently appointed head of the Department of Architecture in the Fay Jones School of Architecture and Design, led the two projects, Millvale Moose and Home Incubator, as the director of the Urban Design Build Studio (UDBS) at Carnegie Mellon University.

Folan came to the U of A in July 2019, and he brought the Urban Design Build Studio with him. Since arriving to campus, he also was named the recipient of the 2018-2019 Educator Honor Award from the American Institute of Architecture Students, the most prestigious award that the AIAS confers on an educator.

"John Folan's receipt of both national architecture education honors and state AIA design practice honors within six months of his arrival to the Fay Jones School punctuates emphatically his appointment as department head and professor of architecture," said Peter MacKeith, dean of the school. "We are so fortunate in his leadership of the department, and in his immediate demonstrations of dedicated, selfless teaching and excellence in professional practice. As these awards and honors indicate, John leads by both active example and supportive mentorship of others. The school is privileged by his presence and proud of his accomplishments."

For the AIA design awards, Millvale Moose won an Honor Award in the Impact Design category at the 2019 AIA Pennsylvania Architectural Excellence Awards and a Certificate of Merit in the Small Projects category at Design Pittsburgh 2019.

Home Incubator won a Bronze Award in the Impact Design category at the 2019 AIA Pennsylvania Architectural Excellence Awards and a Certificate of Merit in the Small Projects category at Design Pittsburgh 2019.

Urban Design Build Studio, which was founded by Folan in 2008, is a public interest design entity. The collaborative of students, professors and professionals work on the implementation of projects that benefit communities that do not have access to design services. Folan said all UDBS projects are community centered and regionally specific. In Pittsburgh, UDBS work focused on issues of vacancy, blight, and the reuse and repurposing of associated building material waste.

"The idea is to take materials that are normally associated with waste, divert them from landfills, and develop processes for converting the materials into something that has a new life, new vitality and is inherently of the place," he said.

The Millvale Moose project is an adaptive reuse of an abandoned Moose Lodge in Millvale, Pennsylvania, that transformed an underutilized structure into a public venue housing a commercial kitchen and a communal social space. The project used reconstituted marble slabs and lumber from buildings that were taken down.

The Design Pittsburgh jury noted that the project's "creative reuse of materials shows that budget does not limit imagination. The end result is a combination of craft, technology, process, fabrication, material reuse and attention to detail while creating a flexible solution to serve the community."

Folan said the Millvale Moose project is the result of a private-public partnership. The kitchen and building are shared by a for-profit restaurant that offers discounted meals, job skills training and cooking classes for local residents, as well as a nonprofit food rescue entity that collects food that local restaurants would otherwise throw out and redistributes it to those in need throughout Pittsburgh.

Folan and a UDBS fellow worked with community members on the Millvale Moose design. In the UDBS Fellowship program, Folan takes on apprentices, usually for a period of three years, and mentors them through their internship to professional registration. The fellows are selected from students who have worked through Folan's UDBS studios as undergraduate or graduate students and have demonstrated an ability to empower others through public interest design.

"It's an important distinction. We're trying to empower the people we work with to act through their own agency," Folan said. "When we're successful, those residents take ownership and are able to replicate processes and projects themselves."

The Home Incubator is a mobile community engagement tool used to enhance communication about housing-related issues specific to Pittsburgh. It was funded by Ford Motor Company and completed in collaboration with East Liberty Development Incorporated, a non-profit developer focused on implementation of mixed-income development.

The Design Pittsburgh jury noted that the project's "innovation, ingenuity, functionality, structural integrity and beauty demonstrated how architects can put our unique skills and artistry toward non-traditional creations to engage communities and solve problems."

The Home Incubator project acts as an in-situ negotiation table for community leaders, financial counselors, social counselors and residents to discuss vacancy, gentrification, displacement and need. Education is central in understanding the nuances of mixed-income development and misconceptions about its role in gentrification, Folan said. The project helps ensure that fixed-income residents understand opportunities available in controlling their own futures — and staying in place.

"In Pittsburgh, and elsewhere, when mixed-income development is successful, improvements to the physical environment are often perceived as gentrification by long-term residents," Folan said. "In many cases, without cause, long-term, fixed-income residents leave because there is a perception of not belonging, and being pushed out. There are policies and mechanisms available to long-term residents that enable them to stay in place, often by leveraging the benefits of market rate development. The point is to bring people together who don't normally communicate with one another."

The mobile outreach and demonstration tool was made from waste cardboard and lumber, materials that are often negatively associated with the neighborhoods where the project is deployed. As with the Millvale Moose project, the modesty of the waste material is deceptive when transformed into the finished project.

The Home Incubator is a network of adaptable forms that can be used as a communal table for feasts in the neighborhoods, storytelling, real-time manipulation of building design in virtual reality and a theater. The project also provides an opportunity for the collection of oral histories and the imagination of resilient futures.

Carnegie Mellon undergraduate students in a variety of disciplines worked with Folan and community members to complete the project, which underwent several iterations before they settled on the final mobile-based design.

Folan is currently working with 52 students and three faculty members on the first UDBS project to be conducted through the U of A, the Ross and Mary Whipple Family Forest Education Center at Garvan Woodland Gardens.

The work follows the same guiding principles: community input, collective intelligence, resilience and appropriate design. At its core, the project focuses on environmental and economic futures for Arkansans. Waste materials may be incorporated into the work in Arkansas, too.

"Material waste is a problem everywhere. We generate a lot of waste, even at the Fay Jones School, where people are highly conscious about sustainability and climate change," he said.

When developing projects, Folan said the UDBS emphasizes replicable strategies, so the projects can sustain relevance beyond the immediate region and ultimately address issues of affordability over time.

Although public interest design and design-build are messy and unpredictable, Folan said that the experiences are valuable for students. These experiences help students understand the hierarchy of values and the physical realities of putting projects together on a timeline, with a budget and for a specific purpose.

"One of the common beliefs when you're developing as a designer is that everything is equally important, and it really is not," Folan said. "There are hierarchies. Things in the development of a project always present as being more important than others."

Designing with the needs of the public in mind can change the design process, because the end result has to be practical for the community. Folan said that AIA Pennsylvania's impact design award category requires evidence that a project has an impact and is used by the community.

For students, the value of this recognition lies in establishing professional relevance at a young age and tangibly demonstrating their own efficacy as change agents, he said. These awards help build their confidence and resumes.

For the communities, Folan said, this recognition instills pride where it is often in very short supply. For those stakeholders who play a significant role in realizing the projects, it gives them confidence to share their voices in the future.