NSF Funds Multidisciplinary U of A Team to Improve Imaging Technology 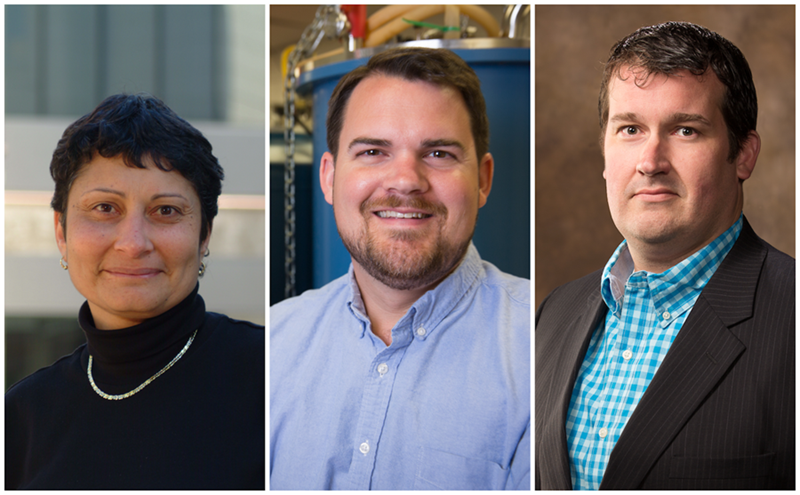 Terahertz radiation falls between infrared and microwave radiation on the electromagnetic spectrum. It is useful for a variety of applications because it can penetrate non-conductive materials like clothing, cardboard and wood, however, its penetration of body tissue is in micrometers.

El-Shenawee's research has been focused for years on terahertz technology to improve imaging for use in identifying breast cancer tumor margins to help doctors make better decisions when assigning treatments. She previously developed terahertz antennas based on plasmonic nano-disks using low temperature Gallium Arsenide (GaAs). The idea to use black phosphorous in this new project came from Churchill, a physicist whose research interests include 2-D semiconductors, like black phosphorous. The collaboration began through a project made possible by the Chancellor's Fund for Innovation and Collaboration.

That collaboration allowed the pair to examine whether black phosphorous would work as a component of terahertz antennas, and computer simulations suggested it could be 10 times more effective than current technology. They'll also work with dielectric nanoparticle coatings, which Coridan uses in his solar cell research, to increase the efficiency of the new antenna.

Black phosphorous could also increase the speed of communication between devices on the 5G network, which has a wide variety of applications.

"If your car has 5G technology, it has an antenna to communicate with other vehicles to detect its location. This detection allows the vehicle to stop automatically when it needs to, so improving the signal speed between these devices can help vehicles sense objects faster, reducing the chances of an accident," El-Shenawee said.

El-Shenawee said the project is a unique collaboration.

"This is my first time working with three different disciplines on a promising idea like this one," El-Shenawee said. "The three of us think differently, but it is quite interesting."

Churchill said the team is excited and grateful for the support they have received.

"I would like to express our team's gratitude for the phenomenal institutional boost our team received to catalyze this interdisciplinary effort, which included Chancellor's Fund support to obtain preliminary data and Arkansas Biosciences Institute support to obtain crucial equipment to test our novel devices," he said.

The NSF funding will also support outreach initiatives geared toward underrepresented K-12 students and their teachers in Arkansas.

"When we presented the concepts of antennas and wave traveling to students in K-12 summer camps, they were very excited," El-Shenawee said.

The camps are coordinated by Amy Warren, assistant director of outreach and summer programs in the College of Engineering.

El-Shenawee said the team will work with Warren on creating unique opportunities and activities for underrepresented students in Arkansas.

"Even the youngest students are familiar with technologies that utilize antennas, but most do not gain any understanding of the concepts underlying this technology until high school," Warren said. "The outreach initiatives will give K-8 teachers and students the tools needed to teach these complex concepts earlier."

El-Shenawee, Churchill and Coridan said they hope this will encourage students to consider majoring in science and engineering-based fields.

The team hopes to have the project completed by 2023.