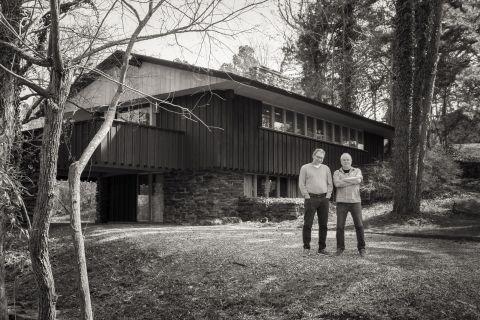 Greg Herman and Dave Fredrick at the Jones home in Fayetteville.

FAYETTEVILLE, Ark. – Housing the Human and the Sacred will introduce the renowned architecture of Fay Jones to a broader audience through interactive gaming technology, made possible by a $250,000 award from the National Endowment for the Humanities.

Professors Greg Herman and David Fredrick received the NEH Digital Projects for the Public Grant based on A House of the Ozarks, their current prototype for a touch-based kiosk and interactive website that allows users to experience Jones’ architecture virtually, in real time and three dimensions.

While A House of the Ozarks provides an interactive, virtual tour of Jones’ Fayetteville home, completed in 1956, Housing the Human and the Sacred will expand the prototype to include five additional structures designed by Jones – four more homes and Thorncrown Chapel, the architect’s most celebrated building. The grant will also enable the researchers to develop an extended, cumulative experience of Jones' architecture via touch-based kiosks, the internet, and virtual reality headsets.

“An Arkansan himself, Fay Jones is one of the most important and most influential American architects,” said Herman, principal investigator for Housing the Human and the Sacred. “As Jones himself put it, more eloquently than I could, architects have ‘the power and responsibility to shape new physical and spatial forms in the landscape, forms that will sustain and nourish and express … the human condition at its spiritual best.’ Fay certainly achieved this, and a big part of what we’re trying to do is ensure more people get to experience what he’s talking about.”

Herman is an associate professor in the Department of Architecture in the Fay Jones School of Architecture and Design. For more than a decade, his teaching and research have focused on Jones’ work, and he serves as director of the Fay and Gus Jones House Stewardship, which was responsible for renovating and curating the Jones family home.

Since 2017, Herman has collaborated with Fredrick to share the Jones home with a larger audience virtually. Fredrick, co-principal investigator on Housing the Human and the Sacred, is a professor of classical studies in the J. William Fulbright College of Arts and Sciences and director of the Tesseract Center for Immersive Environments and Game Design. The Tesseract Center produces video games, interactive visualizations and virtual reality content for teaching and research.

For the past three years, Tesseract Center students and staff, with Herman as content expert and Fredrick as design and production lead, have crafted the interactive design, art assets, and programming for A House of the Ozarks. Their work was made possible by an $86,000 grant from the Chancellor’s Innovation and Collaboration Fund, which helped the researchers obtain the NEH funding.

For Housing the Human and the Sacred, Tesseract Center staff and student interns, working under Fredrick’s direction, will create a multilinear, 3D narrative in six chapters, informed by Herman’s interpretive guidance. Each chapter will correspond to the houses and Thorncrown Chapel. In addition to the Jones home, where Fay Jones lived with his wife Gus until he died in 2004, the project includes three Fayetteville homes – the Sequoyah Project, Hartman Hotz House and Brothers House – and Stoneflower near Heber Springs.

Herman and Fredrick said the project’s interactive narrative will feature three key themes through which Jones’ work explores the human condition: the sense of one’s body in relation to space and design, the effect of architecture on social relations within and beyond the family, and the occupant’s relation to the elements and rhythms of nature.

“The project will leverage key principles from game design that we feel are consonant with Jones’ design approach – multilinear narrative, discovery, surprise and reflection,” Fredrick said. “Through the combination of these principles, the user will interact with the natural elements of water, fire, glass, stone and light, triggering 360-degree video clips that will highlight the primal importance of shelter and immerse the user in the landscape of the Ozarks.”

A U of A alumnus and long-time Fayetteville resident, Fay Jones was a world-renowned architect and recipient of the 1990 American Institute of Architects Gold Medal. He was also a long-time architecture professor and first dean of what is now the Fay Jones School of Architecture and Design, named in his honor 10 years ago.

His architectural approach combined simple elements – stone, wood and glass –into an expression of great richness, while retaining the organic principles and simplicity of expression derived from his mentor and early employer Frank Lloyd Wright.

Jones’ Thorncrown Chapel in Eureka Springs, completed in 1980, has been listed by the AIA among the most significant buildings of the 20th century. Several of his designs for houses and chapels have been honored by the architecture profession for the strength of their design and their appeal to a broad audience.

“Extending the value and impact of architecture and design by all means possible into the public realm is a central mission of the Fay Jones School of Architecture and Design,” said Peter MacKeith, dean of the school. “And to do so through the extraordinary Arkansas legacy of our namesake Fay Jones is a continuing obligation and opportunity. The collaboration between professors Herman and Fredrick, between the Fay Jones School and Fulbright College, between material culture and applied technology, is a powerful example of the university’s potential to convert its intellectual and creative strengths into publicly accessible education and cultural value.”

A podcast of Herman and Fredrick discussing their work on Fay Jones can be found at Research Frontiers, the home of research news at the University of Arkansas.