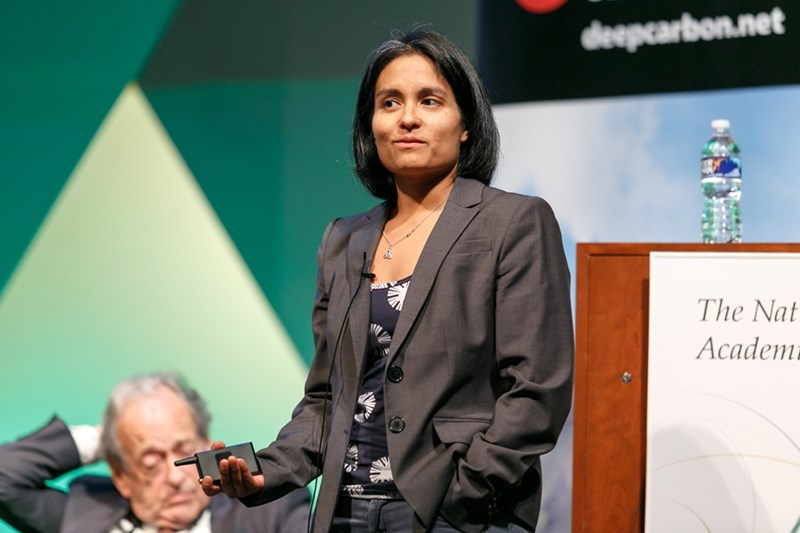 Courtesy of the Deep Carbon Observatory

Celina Suarez speaks to members of the Deep Carbon Observatory in 2019.

Carbon is everywhere. It is in the ground, in our food, in our bodies, in our oceans and in our air. Vast stores of carbon exist deep inside the planet in quantities that dwarf what's aboveground. It moves through these two intertwined reserves in a process similar to the water cycle, maintaining a balance that allows life to flourish.

This carbon cycle is complex and multifaceted, it is a system in which surface carbon in the atmosphere, on land and in the sea is "subducted" into the planet's interior via plate tectonics, and eventually returned to the surface through volcanic eruptions, outgassing and other metamorphic processes. The cycle has been largely stable and balanced throughout Earth's history; the amount going down equals the amount coming back up.

Of course there have been times when that wasn't the case. It's these exceptions — when the carbon cycle is out of balance and the resulting affects to earth's atmosphere — that interest Celina Suarez, associate professor of geosciences at the University of Arkansas. Suarez studies carbon cycle perturbations — large and sometimes sudden shifts in the amount of carbon released to the atmosphere.

Read more about Suarez's research, and the worldwide work of scientists at the Deep Carbon Observatory, in the latest issue of Research Frontiers, an online magazine from the University of Arkansas.