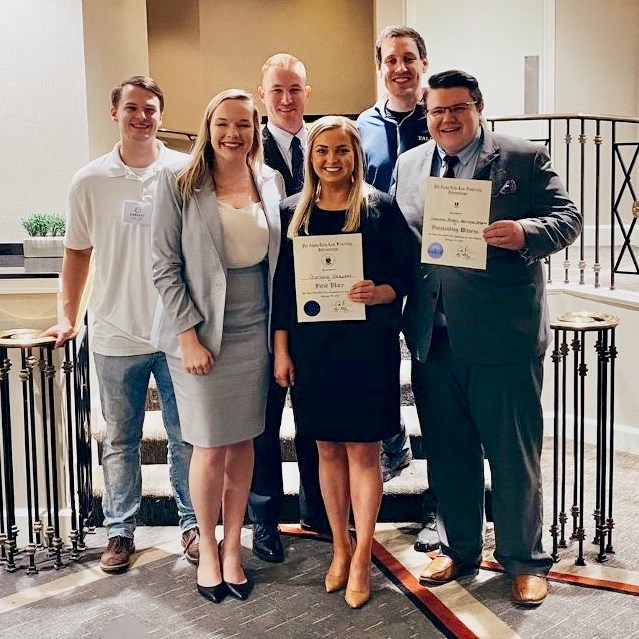 Phi Alpha Delta (PAD), an international professional law fraternity founded in 1902, is one of the largest legal organizations in the world.  The organization sponsors an annual Law School Mock Trial Competition, where 28 teams from Phi Alpha Delta chapters across the country compete for first through fourth place, with additional honors for outstanding defense, prosecution, advocates and witnesses. The competition is judged by volunteer lawyers, judges and mock trial veterans who offer expert, real-world feedback.

The 2020 competition was based on a second-degree murder charge, and each team was tasked with presenting a prosecution and a defense. Brooks and McAnally represented the prosecution while Andrews and Street represented the defense. The team was consistently complimented on their thorough knowledge of the Federal Rules of Evidence throughout the competition.

"That's a testament to professor Nunn's evidence class and what he brought to our team as a coach," Rice said.

"It's not enough to just know the rules of evidence, competitors have to be able to quickly apply those rules to complex fact patterns," Nunn said. "The Arkansas team was exemplary on all of these fronts, and it was truly some of the best advocacy that I've seen from students."

The Board of Advocates (BOA), a student-run organization in the law school, provides students with opportunities to enhance their public speaking and writing skills through practical experience in a variety of advocacy-based competitions. Each year, the board sponsors several mock trial, moot court and negotiations teams as they travel across the country to compete in a variety of contests.

"Organizations such as BOA are so important because without BOA, it becomes increasingly difficult to prepare future litigators to go out into the real world," Street said. "Mock trial competitions, specifically, are beneficial because they improve confidence, enhance your knowledge of evidence and assist you in preparing for a career as a litigator."

"The best part about competing was that I was able to do it with some of my closest friends in law school," Andrews said. "BOA and this trial team has prepared me for a future in litigation, and the experience I've gained is invaluable."

"It was an immense privilege to watch the PAD Trial Team demonstrating their mastery of the evidence rules, as well as trial advocacy skills, at the competition in D.C.," Nunn said. "In fact, there were more than a few moments when I simply sat back and marveled at how talented the students are."