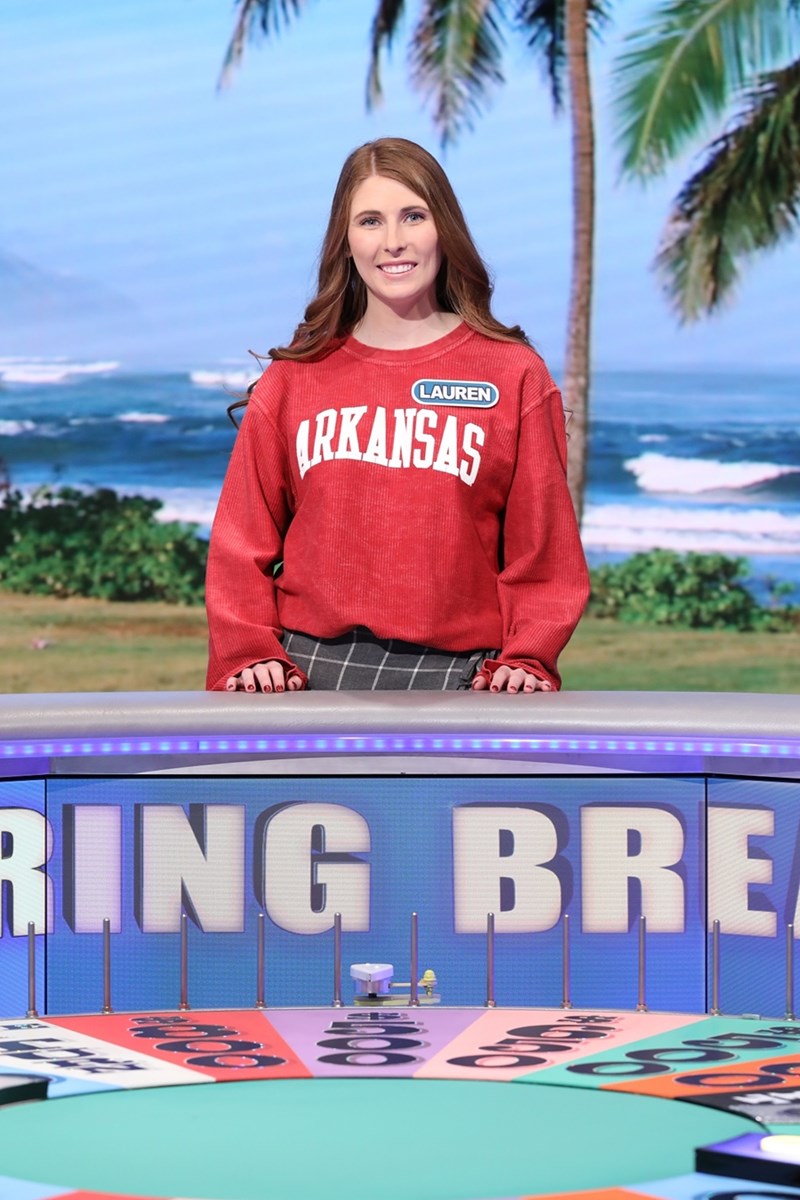 Senior U of A nursing student Lauren Vlach

Solving the Wheel of Fortune puzzle "Purring Kittens" helped Lauren Vlach grab the attention of producers of the game show at an audition in Little Rock earlier this year.

Scoring well on difficult word puzzles after that solidly placed the University of Arkansas student in the contestant pool. Within weeks, she was in Los Angeles, taping the show in front of a live studio audience that included her parents, sister, and best friend from high school.

The senior nursing student will be a contestant during Wheel's annual "College Week Spring Break" programs, which will air the week of March 16-20. Vlach's show will be up first, broadcasting locally on KFSM-TV on Monday, March 16. She competed against students from San Diego State University and the University of South Florida in Tampa.

Vlach plans to watch the show with close friends who have mostly given up on trying to coerce her to disclose who won. She has faithfully upheld the non-disclosure agreement stipulations.

Vlach had been inadvertently training for her Wheel of Fortune moment since she was 6 and competing with her cousins on the Nintendo Wii version of the show.

"I've earned a million dollars on Wii, but I'd never have the pressure of knowing I could make some real money," she said of her time in the studio. "I was nervous. Luckily, we had a rehearsal."

All the College Week shows were filmed in one day. Some students had been in the contestant pool for more than a year.

Vlach applied to be on the show in September 2019 on a whim. Her parents were visiting from Des Moines and they were all at a brewery in Fayetteville when Wheel came up in conversation. Vlach Googled how to apply. Within minutes, she was uploading the required one-minute video within the show's iPhone app.

"It was just so spontaneous," she said. "I usually overthink things."

Vlach got a letter on January 2 that she could audition, aced the audition on Jan. 14 and was in L.A. on Feb. 6 to tape the show.

So, what's the inside scoop? Well, the wheel weighs around 2,000 pounds and takes a little muscle to spin. Pat Sajak and Vanna White were as charming as they appear on television. The studio was frigid and smaller than Vlach expected. Contestants were able to take breaks throughout the taping. The actual game is only 23 minutes. And they all got hair and makeup like Hollywood celebs.

The funniest moment came — in retrospect — when Pat introduced Vlach, using all the material she'd written about herself. When he threw it over to her to expand on the introduction, she remembers saying something like, "Yep, that was everything. I'm pretty simple."

"I can't wait to see how I come across when it actually airs," she said. "I am pretty simple. I work two jobs and I study. School is my focus. Well, and my dog. But they wouldn't let me mention my dog since it wasn't Pet Week."

Even though she had to work with her nursing instructors to juggle some school commitments, Vlach said it was worth it for the Wheel experience.

"It was one of those once-in-a-lifetime things," she said.

Even though she's not always spontaneous, that's how Vlach ended up at the U of A as well. A friend was planning a campus visit and invited her along for the weekend. Just like that Wheel video, she made a snap decision to do it. When she visited, she immediately fell in love with the university.

"I had this great feeling here," she said. "I texted my mom and said, 'I think this is where I want to go.'"

Vlach will graduate from the U of A in May and already has a job waiting at a hospital in Nashville, Tennessee, where she'll be working on the cardio/telemetry (heart) floor with patients who have suffered stroke and brain injuries.