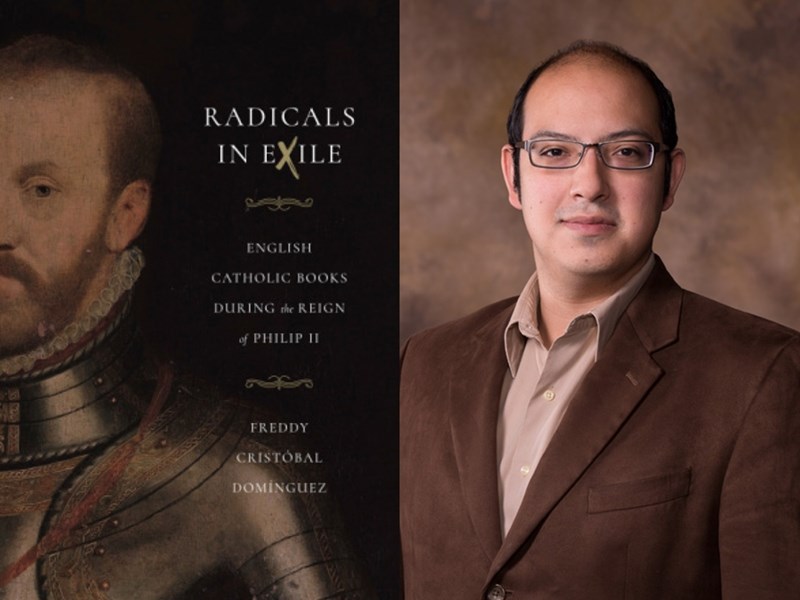 Professor Freddy Dominguez and his book cover Radicals in Exile.

A new book by a U of A historian explores the relationship forged by English Catholic exiles and Philip I of Spain in the sixteenth century. Published by Penn State University Press, Radicals in Exile: English Catholic Books During the Reign of Philip II illustrates how some Catholics in England who faced persecution chose exile over conformity.

Professor Freddy Dominguez, the book's author, closely examines how these expatriates, known as the "Spanish Elizabethans," used the most powerful tools at their disposal — paper, pens and presses — to incite war against England during the "messianic" phase of Philip's reign, from the years leading up to the Grand Armada until the king's death in 1598.

Dominguez looks at English Catholic propaganda within its international and transnational contexts, examining a range of long-neglected polemical texts, demonstrating their prominence during an important moment of early modern politico-religious strife and exploring the transnational dynamic of early modern polemics and the flexible rhetorical approaches required by exile.

Dominguez concludes that while these exiles may have lived on the margins, their books were central to early modern Spanish politics and are key to understanding the broader narrative of the Counter-Reformation.

Radicals in Exile has garnered early praise, with professor James Amelang, an expert in Iberian history, calling the work "skillfully researched and written with enviable clarity." Dominguez's "readings of these works are original and illuminating and they integrate this singular corpus into the wider religious and intellectual history of the period."

Dominguez is an assistant professor in the Department of History in the J. William Fulbright College of Arts and Sciences.