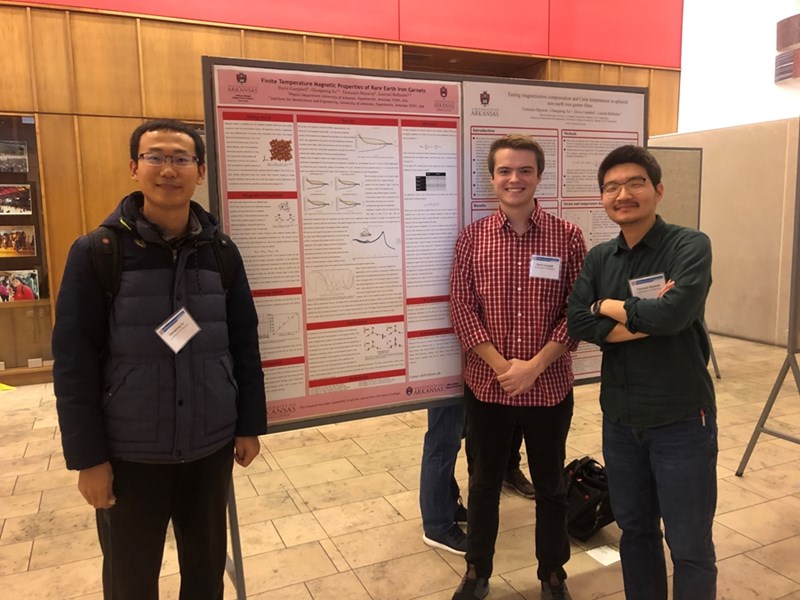 Honors College Fellow Davis Campbell, a physics, math, and biochemistry major from Fayetteville, recently contributed to a paper published in Physical Review B for work on the behavior of rare earth-iron garnets (RIGs) under strain.

Campbell recently presented his own research on the behavior of magnetized RIGs at different temperatures at the Fundamental Physics of Ferroelectrics and Related Materials Conference in Silver Spring, Maryland, on Jan. 28. At the conference, Campbell became the first undergraduate to ever win the Outstanding Student/Postdoc Presentation Award.

"It was definitely very unexpected," Campbell recalled. "I was just trying to do my best, and not look bad while talking about my research. I'm very honored, and obviously wouldn't have been able to do it without Temuujin, Dr. Xu, and Dr. Bellaiche. Temuujin and Changsong helped me out a lot — they had to explain their research before me, so I got a good example from them."

Campbell, who worked closely with Bayaraa, Xu and Bellaiche on the project, began his research into rare earth-iron garnets his freshman year. "Coming out of high school, I was looking for a great group to research with. Before I even started as an undergraduate I contacted Dr. Bellaiche about it."

The team works in computational condensed-matter physics, which involves writing, editing and using code to run simulations to determine the properties of materials under certain conditions. The team's ultimate goal is to discover behavioral patterns for RIGs under conditions that would enable them to be used in the development of new technologies.

With the help of the other members of the research team, Campbell spent a year teaching himself the basics of coding and how to use the software for the supercomputers owned by the university. He then simulated the behavior of gadolinium-iron garnets by computationally applying magnetic fields to the substance at temperatures from 800 degrees to zero degrees Kelvin and observing its response.

"Each atom has its own tiny little magnetic moment," said Campbell, referring to the source of a magnetic field. "The more energy in the system — the higher the temperature — the more sporadic those moments are going to be. As we cool them down, they'll relax a little bit, and the same atoms will have their moments all line up in the same direction. When we hit zero degrees Kelvin, they're all perfectly in line, either positive or negative."

Gadolinium-iron garnets are a particularly interesting substance because, the team discovered, they have a magnetic phase transition — a point at which their magnetic moments flip by 180 degrees — at around room temperature. This magnetic realignment could potentially be used for a redesign of electronic devices.

"With semiconductors, we're reaching a natural limit," Bellaiche added. "They can't get much better than they are right now. If we really want to continue to improve, we have to do something else. The use of unusual magnetic configurations would completely change the architecture of a device — it could go faster, it could store more."

Ultimately, the team is searching for evidence that unusual magnetic configurations can be used as a viable medium for things like memory storage and spintronics (using the spin of electrons to power a device, rather than an electric charge). If this were to be proven, then the cellphones of the future could run faster and more efficiently using magnetic moments.

And this technology would not be limited to phones: "It would have implications for basically any computation device; this includes cell phones, computers, microprocessors - anything that has a chip in it," Campbell said.

Campbell's research has been funded in part by a SURF grant; his travel to and from the Maryland conference was supported by an Honors College Research Travel Grant.