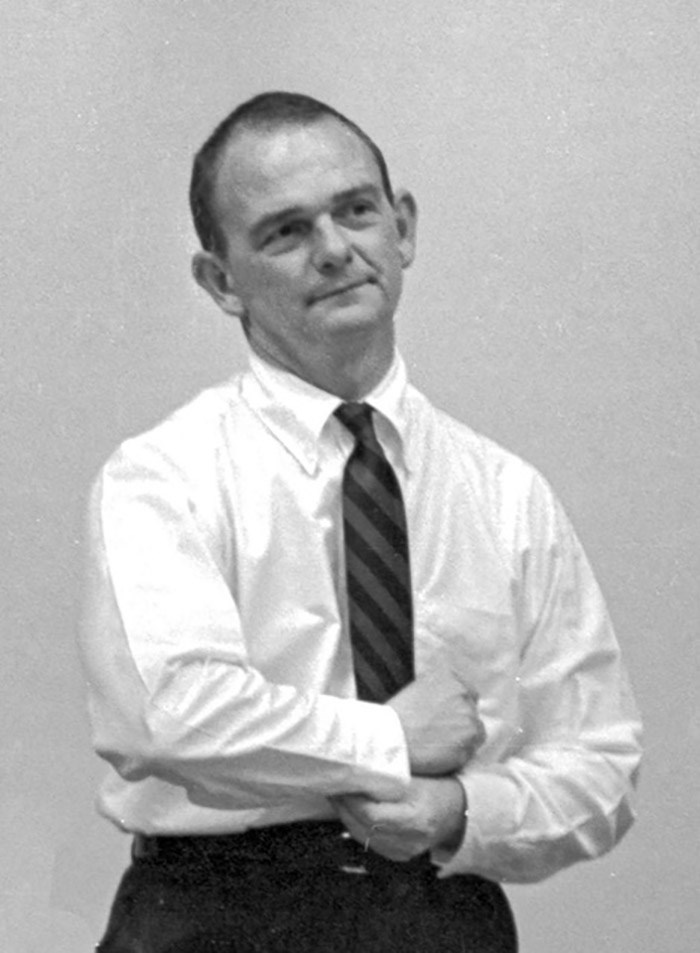 Ernie Jacks, during his time teaching in the architecture program at the University of Arkansas.

FAYETTEVILLE, Ark. – Ernie Jacks, professor emeritus of architecture in the Fay Jones School of Architecture and Design, passed away Feb. 14, 2020, at Washington Regional Medical Center. He was 94.

A memorial service will be held at 2 p.m. Sunday, March 1, in Vol Walker Hall on the University of Arkansas campus.

"Ernie Jacks was a beloved member of the Fay Jones School community," said Peter MacKeith, dean of the school. "Together with Associate Dean Ethel Goodstein-Murphree, we extend our condolences to the Jacks family and his many friends and former students. As a member of the founding class, a respected faculty member and administrator, and as a practitioner representing the vitality of modern architecture to generations of students, Ernie Jacks epitomizes the authentic architect-educator emblematic of the school."

Jacks was in the first graduating class of architecture students in 1950 at the University of Arkansas and later returned to the school as a professor and administrator.

Jacks then joined the Los Angeles office of Craig Ellwood, where he worked on the historic Case Study House Program of the professional journal Arts & Architecture. He completed graduate work in design with Bruce Goff at the University of Oklahoma. In 1954, he again worked in the Erhart, Eichenbaum and Rauch office in Little Rock as a draftsman and designer.

In 1955, the couple returned to Fayetteville, where he became an associate of and opened an office for Edward Durrell Stone. He then opened a Stone office in Palo Alto, California, where his wife joined him as he worked on the Stanford Medical Center design. In 1956, they returned to Fayetteville, where Jacks worked in the Stone office on the Carlson Terrace campus housing and Sigma Nu fraternity house designs.

Their daughter, Jennifer, was born in 1958. Early in 1959, the family moved to the main Stone office in Manhattan, New York. While there, Jacks worked on designs that included the U.S. Embassy in New Delhi, the U.S. Pavilion at the Brussels World Fair, the International College in Beirut, the National Museum in Ponce, Puerto Rico, the Gallery of Modern Art in Manhattan, and the Kennedy Center for the Performing Arts in Washington, D.C.

After working briefly for Holloway Reeves and Associates in Raleigh, North Carolina, Jacks and his family returned to Fayetteville at the end of 1961, when he began teaching architecture at the U of A and opened his own architectural practice on the downtown square. He worked on a remodel for the architecture department office and designed several projects in Fayetteville, including the Patrick Residence, the third phase of Carlson Terrace, additions to the Kappa Sigma fraternity house, St. Joseph Catholic Church, Hillcrest Towers public housing building and the Fayetteville Housing Authority's Willow Heights complex. Other projects included the Chambers Residence in Fort Smith and the Ozark Folk Center and a bank in Mountain View. The Chambers Residence and the Patrick Residence were placed on the National Register of Historic Places in 2016 and 2017, respectively.

Jacks was a professor from 1956-58 and 1962-95, and he was one of a small group of architecture faculty members who guided the school into national prominence during the 1950s and 1960s. He was one of the leaders for the architecture department's move into Vol Walker Hall in the late 1960s and the shift to becoming the School of Architecture in 1974, when the landscape architecture program was added. In 1973, Jacks took a sabbatical to work in the Wittenberg, Delony and Davidson office in Little Rock, where he worked on the Central High School Band Building design.

Jeff Shannon, a professor and former dean of the Fay Jones School, was Jacks' student, taking fifth year studios in the fall of 1969 and spring of 1970, as well as a professional practice lecture.

"In his teaching, he was always objective and looking at student proposals from the standpoint of — especially in fifth year — preparation for professional practice," Shannon said.

In addition to Jacks' professionalism, Shannon also noted a bit of shyness and a wry sense of humor.

"He had a certain humility. And I think that sort of equates to his inherent shyness. He didn't force himself on anybody," Shannon said. "He's one of the best we ever had."

In 1975, Jacks closed his design practice and devoted himself fully to teaching. He served as associate dean of the school from 1975-88 and also served as faculty advisor for Tau Kappa Alpha Fraternity. In 1991, he worked briefly on the renovation of the U of A Fine Arts Center during a second sabbatical, and he was a design consultant for various other architects around the country. He continued to teach even after his official retirement in 1992; he taught his lecture courses as an Emeritus Professor through the spring semester of 1995.

From 1964-90, Jacks served as member and chairman of the Fayetteville Planning Commission, and he was instrumental in developing two of the city's general growth plans (1970 and 1990), as well as its sign ordinance, greenspace/parks ordinance, screening and landscaping ordinances and bypass ordinance.

In 2013, Marlon Blackwell Architects established a lecture in his honor, the Ernie Jacks Lecture, within the Fay Jones School's annual lecture series, because the firm's leadership wanted to give Jacks the recognition they felt he deserved. Featured lecturers have included Chad Oppenheim, Julie Snow and Michael Maltzan.

"For me, Ernie really represented the poignancy of a life dedicated to the principles of modern architecture, and to what it is to be a professional," Blackwell said. "He was a man of true passions and convictions about the power of architecture, and he was a mentor by example."

Blackwell noted the range of experience Jacks had in his professional practice — working with Craig Ellwood in California, with the residential Case Study House Program, and then working in New York, with Edward Durell Stone, on projects that were much more institutional and commercial.

"He was a dyed in the wool modernist, and unapologetic about that," Blackwell said. "His experience spanned all the different types of building types and scales and programs. He had a very broad and deep knowledge of the profession, of modern architecture."

Ernest "Ernie" Eugene Jacks Jr. was born in Memphis, Tennessee, on Dec. 14, 1925, and grew up in West Memphis, Arkansas. He is survived by his wife of 72 years, Nita Jacks; daughter and son-in-law, Jennifer and Don Shreve; and Russian Blue cat, Anastasia, all of Fayetteville.

In lieu of flowers, memorial donations may be made to Fayetteville Animal Services or the Fay Jones School of Architecture and Design.