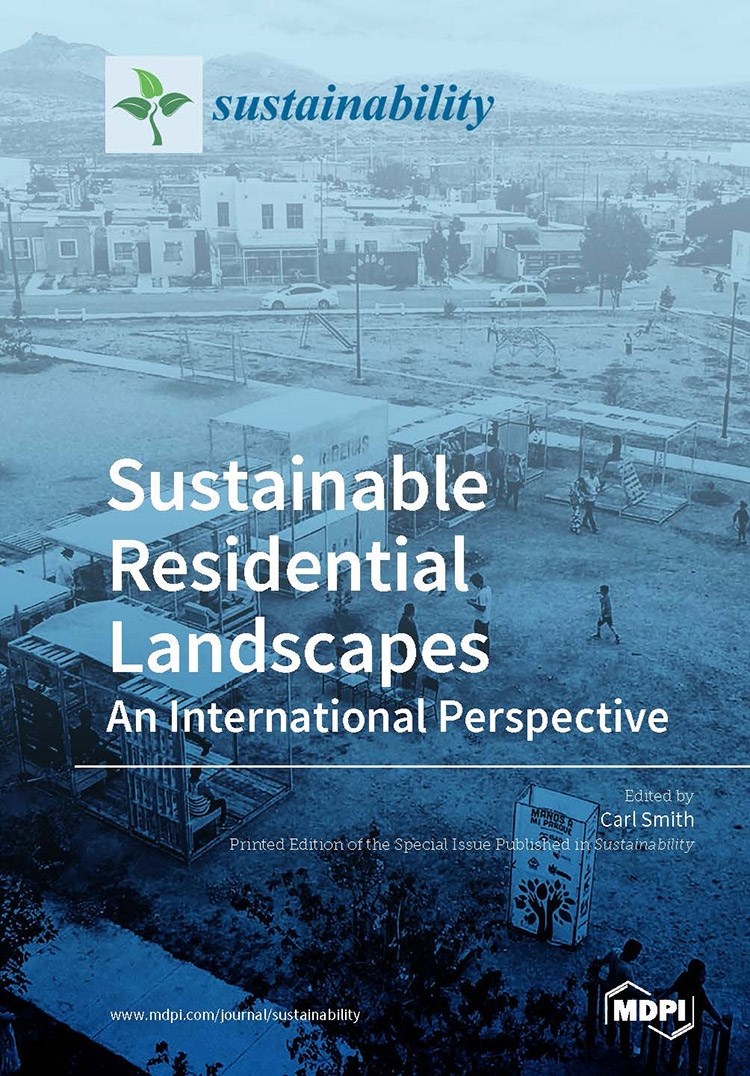 The cover of "Sustainable Residential Landscapes: An International Perspective" features a project led by Gabriel Diaz Montemayor, an assistant professor of landscape architecture in the Fay Jones School, in Chihuahua City, Mexico, in 2017.

FAYETTEVILLE, Ark. – A new book edited by Carl Smith, a professor at the University of Arkansas, explores sustainable residential design and planning for global communities in the 21st century.

The book, Sustainable Residential Landscapes: An International Perspective, was published by MDPI in January. The book is a compilation of 10 academic articles curated and guided by Smith and published last year in a special issue of the online journal Sustainability.

Contributors include scholars in landscape architecture and architecture, planning and construction, ecology and horticulture, agricultural and environmental sciences, and health, exercise and nutrition.

"It's a fairly broad volume, looking at a whole range of environmental and socioeconomic issues related to sustainable landscape," Smith said. "As a practitioner and as a teacher, I never work on projects where design occurs in a vacuum. Design can often lead the discussion, but it requires collaboration with other interests to fulfill the potential of the landscape challenge."

Smith is an associate professor of landscape architecture in the Fay Jones School of Architecture and Design, where he has taught full time since 2008.

Smith's previous book, Residential Landscape Sustainability: A Checklist Tool, published by Wiley in 2008, has garnered renewed interest in the past 18 months. It was chosen as a keynote publication by the American Society of Landscape Architects in 2018 and is featured on the reading lists of many landscape architecture programs in the United States and abroad.

Smith's ongoing contributions to sustainable landscape research, teaching and practice were recognized by the Royal Society of Arts in London, where he was elected to Fellow in 2019.

MDPI Publishing, based in Basel, Switzerland, asked Smith to coordinate the online series and book. Smith invited scholars from around the globe to submit their research.

Another contributor was Gabriel Diaz Montemayor, an assistant professor of landscape architecture in the Fay Jones School. In his article, he looked at ways open-space design can address social challenges in subsidized housing developments in northern Mexico. In an 18-month project commissioned by the U.S. Agency for International Development (USAID), he coordinated two projects, one in the metropolitan area of Monterrey and another in a suburban neighborhood in Chihuahua City.

These projects aimed to lower the incidence of street crime by reactivating public space through social and environmental measures, Diaz Montemayor said. Initiatives included organizing sports, theater and music events to bring people into the spaces and implementing better lighting, planting and maintenance.

The cover illustration for the book features one such intervention in a neighborhood park in Chihuahua City in 2017.

Smith co-authored the closing chapter, a look at indigenous people's perception of landscape and how that influences their relationship with mainstream sustainable ideas of development and land-use change.

"For many, many people, a residential landscape is not defined by land-use code. It is simply where they inhabit," Smith said. "Those indigenous cultures have a very different perspective on balance between their own needs and respecting the needs of the environment that supports them.

"The indigenous perception starts to reframe the idea of what defines a residential landscape: that a landscape is both physical but also something internal within the conceptualization of the people who live there."

While this book contributes to ongoing research in the field, Smith said he views it as "being a link in a chain of discussion rather than being an endpoint. It may be these authors that take up that challenge, but it could be others."

Many of the projects have a direct correlation with issues affecting the local context, Smith said. Research into how increasing population density affects landscape perception and use in Bolivia is very pertinent to the ongoing conversation in Northwest Arkansas, for example.

"What really adds value to addressing problems further afield is knowing that, ultimately, they can have a resonance in the communities we work with in Arkansas, as well as in our design studios in the school," Smith said.