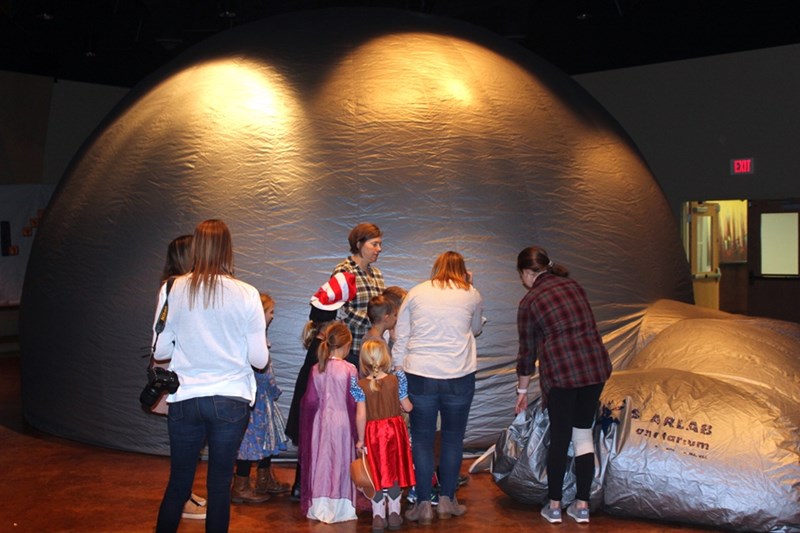 The Center for Space and Planetary Science is launching a crowdfunding campaign to support the purchase of a new, modernized mobile planetarium.

The campaign will run from Feb. 18 to March 19 on the University of Arkansas' official crowdfunding platform, at capitalprojects.uark.edu/planetarium.

Space Hogs, a registered student organization at the University of Arkansas, is partnering with the center to increase the RSO's educational impact on the Northwest Arkansas community with a significantly improved planetarium that they can bring to any organization that requests it.

The campaign includes rewards for donating at certain levels, such as being listed as an official sponsor of the planetarium, or being invited to private, early showings of the new planetarium. All donations will help bring decades of new space science to the people of Arkansas.

The student volunteers of Space Hogs have the aim of promoting interest and educating the community in space and planetary science through public outreach events. Space Hogs has been dedicated to enriching the space science education of Northwest Arkansas for over a decade now, hosting and attending hundreds of community events at schools, churches, community centers, and more.

Their outreach presentations often fill an educational gap in under-served communities throughout Northwest Arkansas. Throughout the last year alone, they estimate over 2,000 people have attended their events.

The most popular outreach program is the mobile planetarium show, using the late-1970s-built inflatable planetarium to take students on a tour of the solar system and the night sky. With no permanent planetarium facility in Northwest Arkansas, Space Hogs events are sometimes the only opportunity for local students to engage with experts in astronomy and planetary science.

However, after decades of use, their current planetarium is starting to show its age. There are holes in the dome, issues with the projector, and outdated information on the projector slides, which cannot be updated.

A new planetarium will allow Space Hogs to present more up-to-date information with a brighter, all-digital projector and a new, more accessible dome. This is the equivalent of updating from an old carousel slide projector to an HD projector with an internet connection for software updates.

Not only will this planetarium be used by Space Hogs in their various outreach events, but the space center can also use it for astronomy courses at the university.