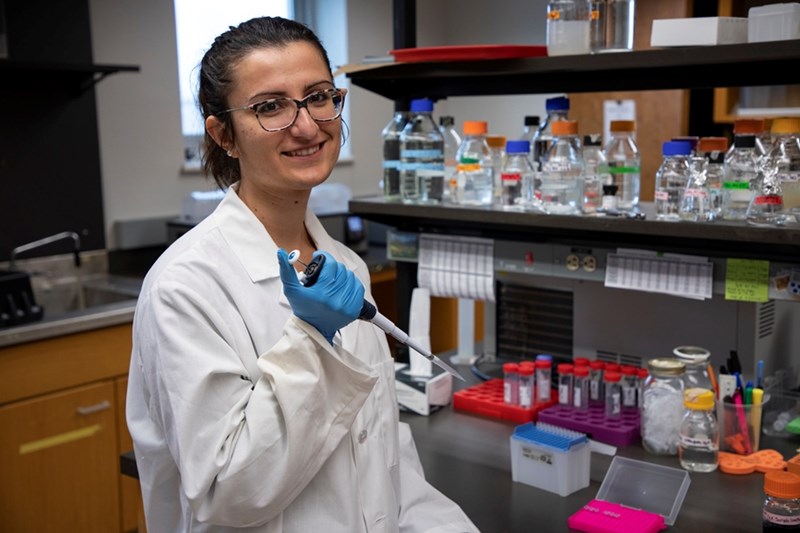 If you think complex research at the interface between Entomology and Plant Pathology, as well as Cell and Molecular Biology sounds like a mouthful, try sharing the details in a two-minute video that summarizes your whole effort.

That's exactly what U of A Bumpers College graduate student Rinalda Proko did. In the process, she won second place in the nationally competitive American Society for Cell Biology annual Elevator Pitch competition, building on her earlier success in the U of A Three-Minute Thesis competition.

In the call for submissions, ASCB encourages graduate research students to explain scientific research so that it's understandable "to everyone - to the public, to your grandmother, to politicians - and do it with flair."

Proko is part of Dr. Martin Egan's fungal cell biology research group in the Arkansas Agricultural Experiment Station, the research arm of the U of A System Division of Agriculture. She is working towards a solution to rice blast disease caused by the fungus Magnaporthe oryzae. The practical application of the research could result in significant increases in crop sustainability for the world's rice and wheat harvests.

As seen in the video, Proko estimates the amount of rice that could be recovered by elimination of the disease would be enough to feed more than 60 million people. Proko said defeating the disease she calls a "global cereal killer" would provide more healthy food for the worldwide population.