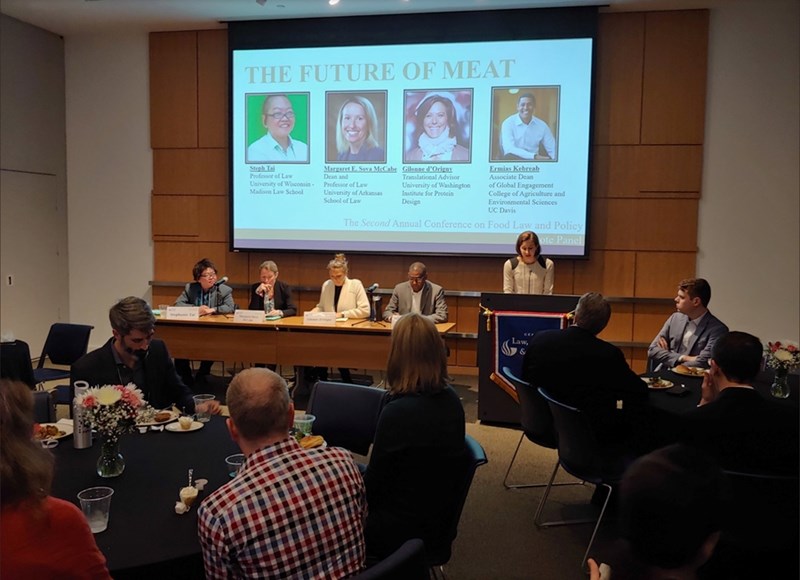 "The Future of Meat" keynote panel during the Academy of Food Law and Policy conference at Georgia State University.

FAYETTEVILLE, Ark. – Margaret Sova McCabe, dean of the University of Arkansas School of Law, and Susan Schneider, the William H. Enfield Professor of Law and director of the LL.M. Program in Agricultural and Food Law, were among experts from around the globe who participated in the Academy of Food Law and Policy second annual conference held Dec. 10 at Georgia State University College of Law in Atlanta.

Food law and policy is one of the fastest growing legal fields, with a rapidly increasing number of law review articles, conferences, courses and clinical programs focused on the field's cases and controversies.

Morning and afternoon sessions featured scholarly works-in-progress on a variety of topics. McCabe was part of the keynote panel titled "The Future of Meat," which included academics from the University of Washington Institute for Protein Design, University of Wisconsin Law School and University of California-Davis College of Agriculture and Environmental Sciences.

The keynote panel considered tradeoffs of meat and meat alternatives as a part of the human diet. Consumer interest in meat alternatives is on the rise, driven by concerns about diet and the environmental impact of livestock production. Alternatives are primarily plant-based products, although biotechnology now allows scientists to produce lab-grown meat without animals. While some see this as beneficial, others argue that the dietary and environmental consequences have not been fully researched.

McCabe addressed how systems-based design can help us to navigate this divide and develop protein law and policy. She discussed issues such as the politicization of belief in scientific research, the potential impact of regulation on communities that rely on agriculture for income and the industry's impact on human health and planetary health.

The Academy of Food Law and Policy hosted its second annual conference in response to the explosive growth in food law and policy. The conference was designed to

The academy is a membership organization that serves as a forum for individuals and institutions involved in teaching and scholarship in the broad field of food law and policy. It was founded in 2016 by leading faculty and scholars in the field including two faculty and one staff member at the School of Law. McCabe and Schneider were among the academy's seven-member founding board of trustees, and Sarah Hiatt, LL.M. program administration, serves as the organization's executive director.