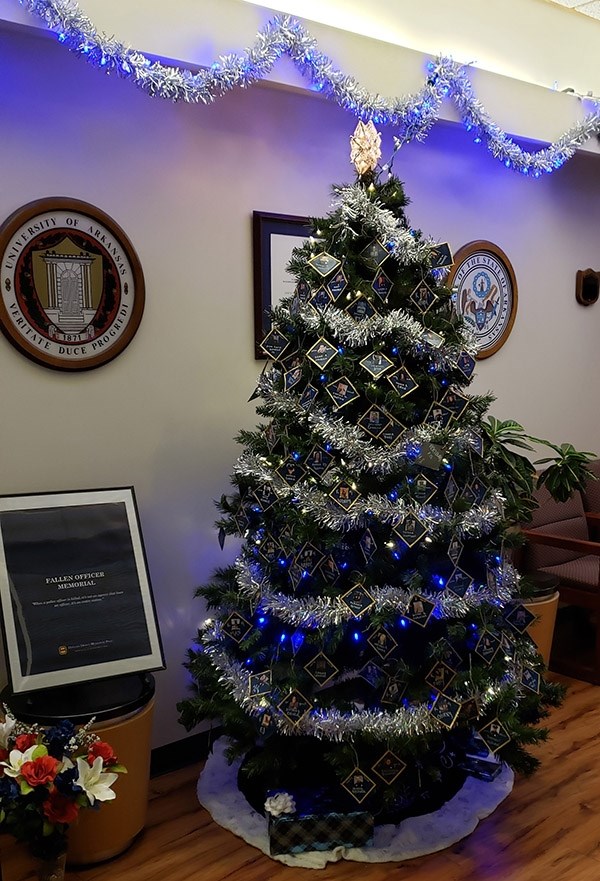 FAYETTEVILLE, Ark. – The University of Arkansas Police Department is honoring officers across the United States who gave their lives in the line of duty in 2019 with a special holiday memorial display.

The memorial is located in the lobby of the main UAPD station on Razorback Road and consists of a Christmas tree decorated with blue and white lights, trimmed with handmade ornaments displaying the photograph, name and agency of each officer and K9 officer that lost his or her life in 2019. This annual memorial project began in 2017 to focus on the commitment of the men and women in law enforcement and their families who have endured the ultimate cost in the line of duty.

As of last week, there were 118 police officers and 24 K9 officers killed in the line of duty  across the United States, according to statistics from the Officer Down Memorial Page. The United States has seen a 26 percent decrease in officer deaths since 2018.

Chris Cosgriff, founder of the Officer Down Memorial Page, said, “When a police officer is killed, it is not an agency that loses an officer, it’s an entire nation.” UAPD wishes to share this message with the students, faculty and staff at the University of Arkansas, and all members of our community.

Arkansas suffered two line-of-duty deaths this year. Sgt. Michael Stephen of Stone County was killed by gunfire on July 18 while responding to a domestic incident. Sgt. Stephen was a U.S. Army veteran and served with Stone County Sheriff’s Office for 20 years. Officer Stephen Carr of the Fayetteville Police Department was killed in the line of duty on Dec. 7. Carr was 27, a Texas native, and served for two-and-a-half years. UAPD sends thoughts and well wishes to the families and communities of those who passed this year.