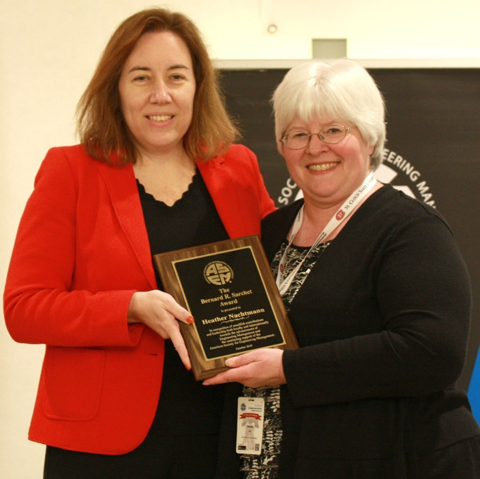 Heather Nachtmann, associate dean for research, professor and director of MarTREC, has received the Bernard Sarchet Award from the American Society for Engineering Management.

The award was presented at society's annual conference in Philadelphia in October.

Paul Kauffmann, executive director of the American Society for Engineering Management, nominated Nachtmann for the award. In his letter, he recognized her long and distinguished record of service to the Society. He noted, "Our society has a number of worthy candidates but in my estimation, Heather is the most deserving."

John English, dean of the College of Engineering, said the award reflects well on Nachtmann and the college.

"Heather's outstanding contributions to the field of engineering management have distinguished her from her peers, and she continues to represent the University of Arkansas College of Engineering exceptionally well at the national level," English said. "I'm proud to call her my colleague and friend."

Nachtmann has been with the College of Engineering since 2000, starting as an assistant professor in the Department of Industrial Engineering. Her service and research have brought her significant accolades throughout her time with the College of Engineering, including the 2018 Wellington Award from the Institute of Industrial and Systems Engineers. The Wellington Award recognizes outstanding long-term contributions and service in the field of engineering economy that enhance the visibility of the Engineering Economy Division of IISE.

In 2013, Nachtmann led efforts to secure $4.2 million in funding from the U.S. Department of Transportation to create the Maritime Transportation Research and Education Center to increase economic competiveness through efficient, resilient and sustainable transportation systems on U.S. navigable waterways. The consortium received an additional grant in fall 2016 for an anticipated $7.5 million from the U.S. Department of Transportation to be acknowledged as the nation's premier source for expertise on maritime and multimodal transportation research and education. As a result of this external research funding, Nachtmann was recognized as one of the "Top 15 of 2015 and 2016."

Nachtmann holds the title of Fellow in the American Society for Engineering Management and the Institute of Industrial and Systems Engineers.

Industrial engineering alumnus Brian Smith was elected as a Fellow of American Society for Engineering Management during the 2019 ASEM conference. He is an assistant professor at Mississippi State University. Nachtmann served as Smith's advisor during his doctoral degree work at the University of Arkansas.