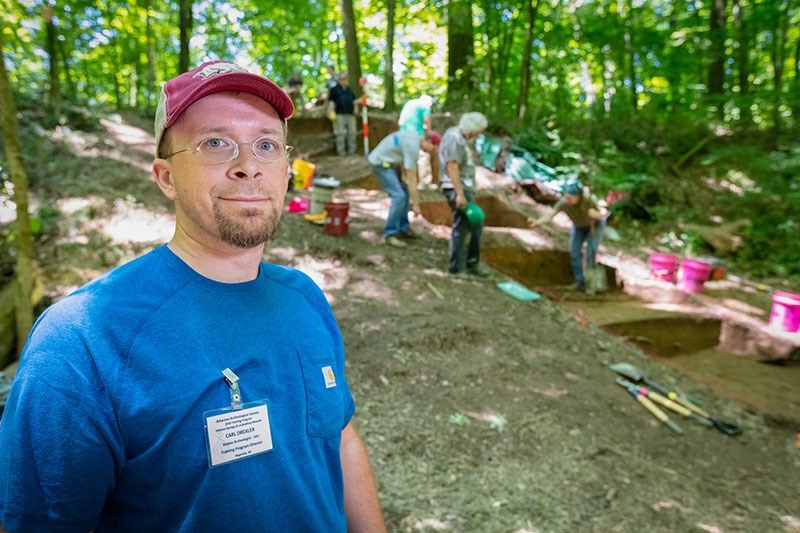 Carl Drexler at the Lockesburg Mounds during an archeological excavation.

DE QUEEN, Ark. – Nearly a millennium ago, on what today is an ordinary farm in the Little River basin east of De Queen, hundreds, if not thousands, of Caddo people lived and worked.

Today, all that remains of that community are earthen mounds, 13 in all, 12 smaller mounds surrounding a large platform where a temple or some other kind of community or ceremonial structure once stood.

Though it was one of the largest Caddo sites in the region, very little is known about the so-called Lockesburg Mounds.

In this episode of Short Talks From the Hill, a research podcast of the University of Arkansas, Carl Drexler, assistant research professor and station archeologist with the Arkansas Archeological Survey, talks about the importance of Lockesburg.

"Centers like this would have been places of great power, that would have brought people together from very far away, for very important occasions," Drexler says in the podcast.

This past summer, Drexler led a major archeological excavation at the Lockesburg Mounds, named after the small community nearby. Co-sponsored by the Archeological Survey and the Arkansas Archeological Society, the dig shed light on an ancient site with a modern, infamous history. In the 1980s, landowners signed a mining lease to the site, allowing artifact hunters to dig up and extract artifacts, leaving professional archeologists very little to work with.

"The thing is, we're still trying to figure out when it was in operation," Drexler says in the program. "Not having artifacts or samples from the site, we really don't have a good database for teasing out the details of the place and the lives of the people who built it."

To listen to Drexler talk about the Lockesburg Mounds and the work being done there, go to ResearchFrontiers.uark.edu, the home of research news at the University of Arkansas, or visit the "On Air" and "Programs" link at KUAF.com.

Short Talks From the Hill highlights research and scholarly work at the University of Arkansas. Each segment features a university researcher discussing his or her work. Previous podcasts can be found under the Multimedia link at ResearchFrontiers.uark.edu.

Thank you for listening!