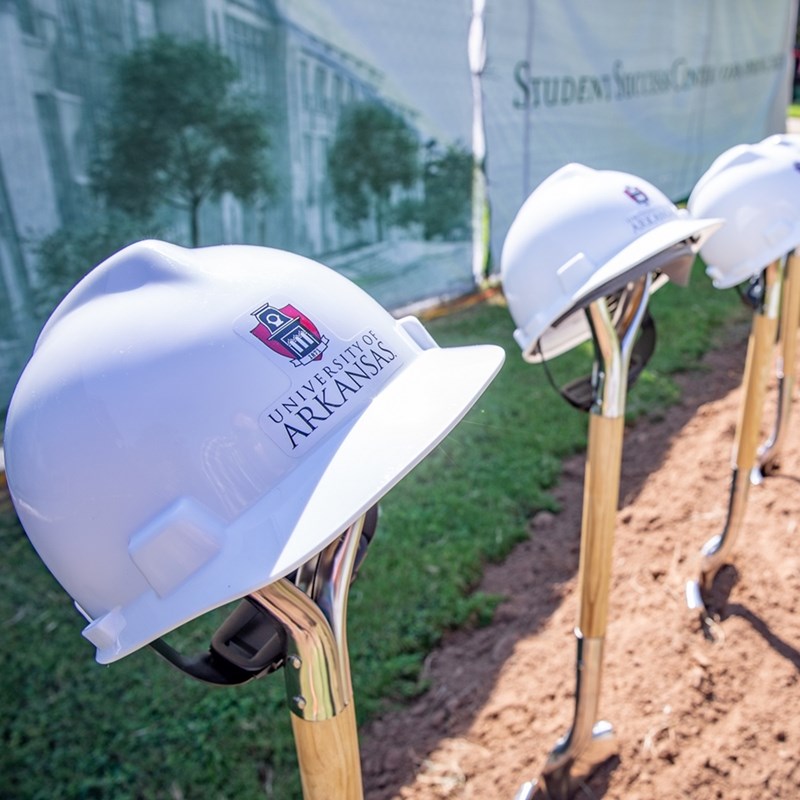 A $5 million grant from the Walmart Foundation will support the university's new Student Success Center, which broke ground in September.

FAYETTEVILLE, Ark. – The Walmart Foundation is supporting student success at the University of Arkansas with a $5 million grant for the new Student Success Center on campus.

One of the goals of the Student Success Center will be eliminating significant undergraduate student achievement gaps. The center will serve the entire campus as a centralized comprehensive academic support unit, and the program staff within the center will initiate contact with students during the summer before their first year. This connection will continue as students move toward careers or professional and graduate programs and include financial, academic and social support.

“As a first-generation college student, I can attest to the importance of having access to programming and resources that foster success in a university setting,” said Chancellor Joe Steinmetz. “The Walmart Foundation is making it possible for more students – especially those from Arkansas – to access the tools they need in one convenient location, and this grant will help create the first Student Success Center of its kind in the SEC. We are appreciative of the foundation’s continued support of our students and recognize that investments like this will help students who have unmet financial, academic and social needs achieve academic success.”

The 360 Advising Program is a pilot initiative in the Office of Student Success and proactively assists students in need by using predictive analytics to provide mentoring, resources and support to first-generation Arkansans. The STEM Studio will provide academic support for gateway math and science courses and help students demographically underrepresented in STEM fields prepare for meaningful careers.

“We are delighted to be collaborating with the Walmart Foundation to support University of Arkansas students,” said Trevor Francis, associate vice provost and director of student success. “The stronger our partnerships, the greater number of students we can inspire and provide with much-needed holistic support. Ultimately, this grant will be used to design a place where more students, especially those whose talents have yet to be discovered and cultivated, will be empowered to achieve their unique academic and career goals.”

The university’s graduation rates have improved significantly over the past 15 years – reaching a record 66 percent in the latest U.S. News and World Report rankings. For students without financial, social or academic need, the six-year graduation rate is 77.7 percent.

A groundbreaking ceremony for the Student Success Center was held on Sept. 12. The four-story, 71,000-square-foot facility will be located in the historic heart of campus at the location of the former Social Work Building, between Memorial Hall and Old Main. It is scheduled to open in early 2022.

The foundation’s contribution counts in Campaign Arkansas, the university’s $1.25 billion capital campaign to advance academic opportunity at the U of A.