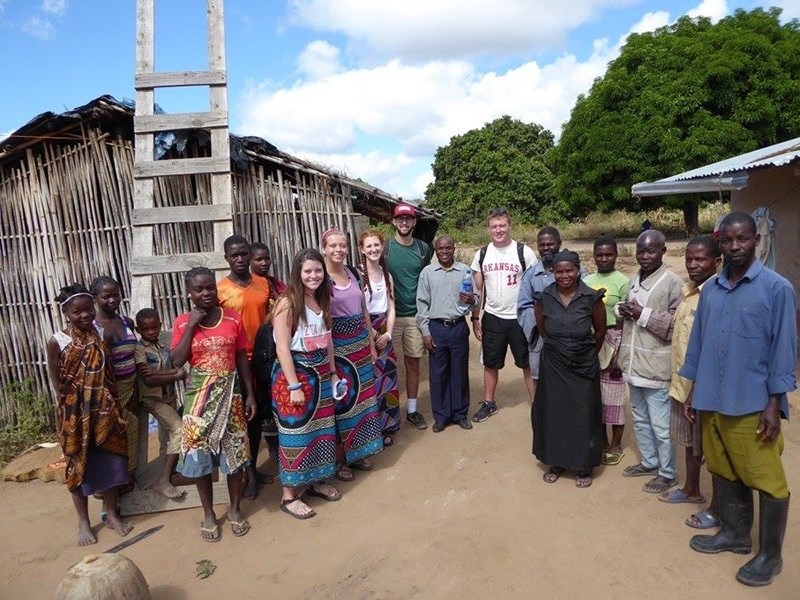 Sarah Beth DeLay, near the center in a purple tank top, with colleagues in Mozambique. To respect cultural norms in their host country, the female students wear traditional "capulanas."

Three honors students in the Dale Bumpers College of Agricultural, Food, and Life Sciences have recently had their undergraduate theses research published in the International Undergraduate Journal for Service-Learning, Leadership, and Social Change.

"It's no surprise that Sarah Beth, Kelsey, and Mersady have had their research experiences published," said Jennie Popp, associate dean of the Honors College and co-director of the University of Arkansas Service-Learning Initiative. "These students truly embrace the fact that it takes dedication, cooperation, humility and resilience to incite lasting change in a community. They are exceptional students and hard workers, and the evidence is right here."

Honors agribusiness major Sarah Beth DeLay completed her research with professorLanier Nalley. Her article, "Poultry, Protein and Profit Across Continents: A Perspective on How Poultry is Changing Lives in Belize and Mozambique," was published in Vol.8 Issue 1 of the journal.

In 2016, DeLay conducted research in Nampula, Mozambique, exploring the impact of employment at New Horizons, a local poultry farm, on the quality of life of its workers and their families. This project served as the foundation for her honors thesis. The following year, DeLay traveled to Dangriga, Belize, where she worked as part of a team to develop an instruction manual for creating a personal backyard poultry farm operation. This manual is intended to help families in a historically poverty-stricken area generate supplemental income through the raising of poultry. This project, which in the future will also include the construction and implementation of these poultry farms, will be continued by a new group of students each summer.

Mersady Redding and Kelsey Johnson, both animal science majors, were published earlier this month in Vol. 9, issue 1 of the journal. Their paper was titled "Service Learning in Developing Communities: Conducting Research in Mozambique and Belize."

Like DeLay, Redding and Johnson conducted service-learning projects in both Nampula, Mozambique, and Dangriga, Belize. In Mozambique, the women worked to reduce chick mortality rates. Redding researched existing vaccination protocols in an effort to reduce oversights in the process that led to a high chick mortality rate. As dehydration resulted in a high number of chick deaths, Johnson developed a more efficient, effective gelatin-based solution to keep the chicks hydrated during transportation.

In Belize, the two partnered with Billy Barquedier National Park to conduct a survey of mammal species found there; a comprehensive list did not exist, and mammal sightings are a major tourist attraction. By the end of their eight weeks in country, the two were able to identify a total of 20 species, many of which are considered at risk or endangered, including the black howler monkey, ocelot, margay, puma and tapir.

"None of this research would have been possible without Amy Farmer," Popp said. Farmer is a University Professor of economics in the Sam M. Walton College of Business and spearheads the selection of projects and students for the independent research/service-learning trips to Belize. "These service-learning trips never would have gotten off the ground if not for her."

All three students were doing concurrent research projects in Belize, and were a part of the pilot program for the Honors College Extended Research Travel Grant, now an annual grant with a fall deadline. 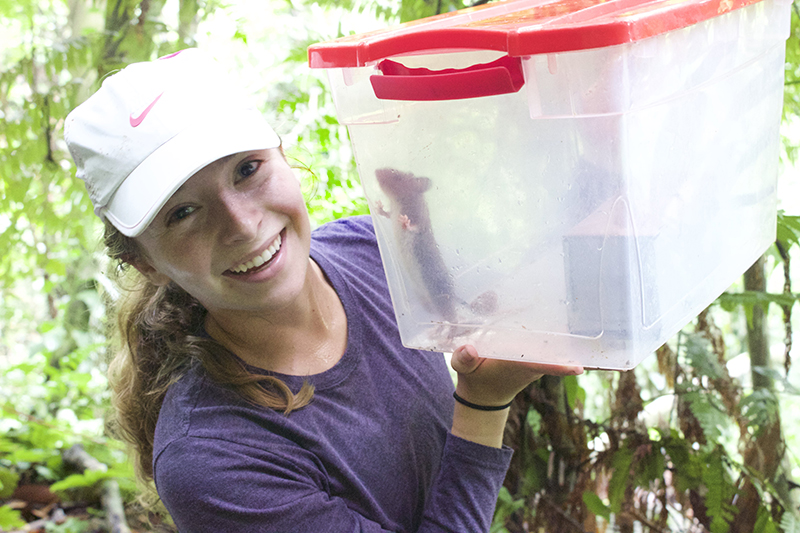 Kelsey Johnson with the first rat that she and Redding caught in a small live trap. “He is a Watson’s Climbing Rat, so naturally we named him Watson.”