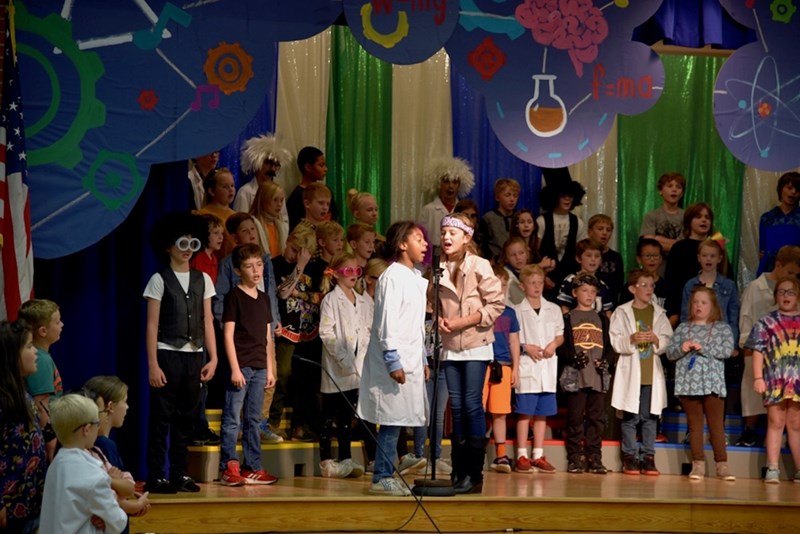 Students from Root Elementary in Fayetteville perform music written by Gary Prinz, associate professor of civil engineering, and his students as part of the school's STEMusical program. Prinz partnered with music instructor Adriane Hapgood, to develop a musical curriculum meant to teach scientific concepts to fourth-graders.

Gary Prinz, associate professor of civil engineering, was in the car, listening to his young children sing every word of a popular pop song, when he got the idea for a program that would help him earn one of the National Science Foundation's most prestigious awards.

If his children could intuitively memorize the lyrics to a pop song, what else could kids memorize through song?

"I thought to myself, if my young kids could easily remember complicated song lyrics about boring pop-music topics, students could certainly memorize songs about awesome topics, like Newton's laws of motion," Prinz said.

In mid-October, that dream came to life when approximately 60 fourth graders at Root Elementary School in Fayetteville performed the STEMusical for their parents and fellow students. The first four letters are an acronym for science, technology, engineering and mathematics. The program featured songs like "Electr-on," to the tune of Aerosmith's hit "Dream-on," but with the lyrics changed to teach listeners about different forms of energy and how although it transforms, it is always conserved.

Other hits included "It's Fast," a take on the Etta James classic "At Last," reworked to teach students about the speed of light.

The project was made possible through Prinz's receipt of a National Science Foundation Faculty Early Career Development award, a $500,000 grant for early-career faculty members across the nation who excel in teaching and research. In addition to funding research, each CAREER award includes an outreach portion, and for Prinz, that idea led to a partnership with Adriane Hapgood at Root Elementary School.

Prinz and his doctoral students composed several songs and Hapgood helped translate them into the classroom for the Root fourth-graders.

For Hapgood, the collaboration was an easy choice because the benefits for students were so clear.

"When Dr. Prinz approached me about collaborating on a Science Musical I thought it was a fantastic idea," she said. "Music is an absolutely magical way to retain information. I can still recall the 50 states because of a song I learned in third grade. Our fourth graders got to dance and sing about kinetic energy, electrons, inertia, Newton's Laws and many more."

John English, dean of the College of Engineering, said the program exemplifies the college's outreach efforts.

"The impact of this program goes far beyond simply teaching children songs," he said. "STEMusic is about getting the next generation of engineers and computer scientists excited and engaged with science, and that's critically important for the future of the profession. Reaching students right here in Fayetteville is part of the university's land-grant mission to use our resources to make life better in Arkansas communities."

Prinz hopes the project will have a broad impact.

"I hope that learning these science themed songs will have a lasting impact on the student's concept retention and motivation for future study," Prinz said. "Who knows, maybe someday the radio will be filled with amazing science-themed songs."