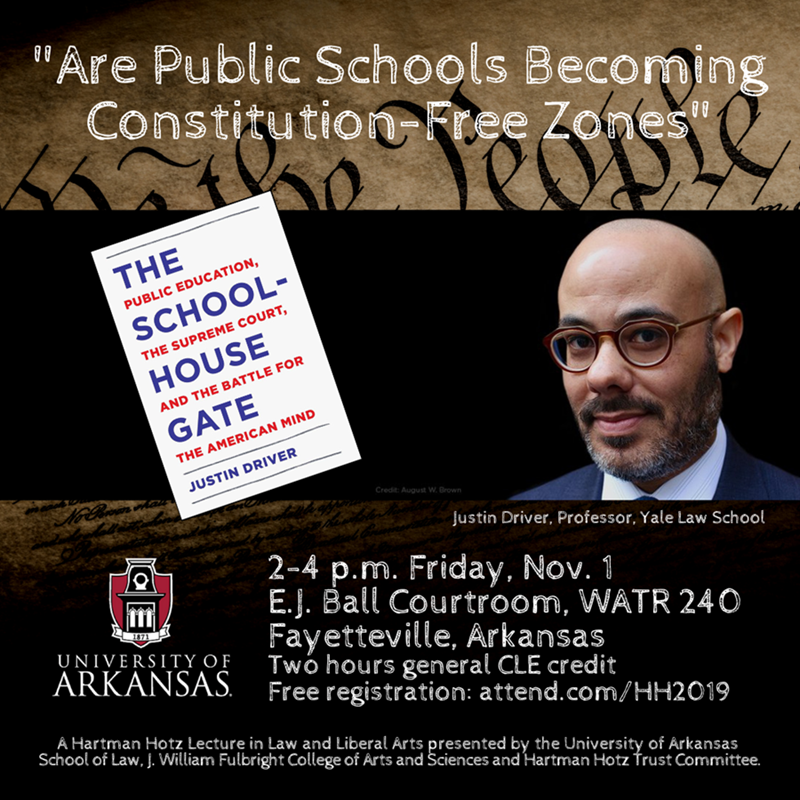 FAYETTEVILLE, Ark. – Justin Driver, a professor of law at Yale University, will deliver "Are Public Schools Becoming Constitution-Free Zones," the fall Hartman Hotz Lecture in Law and Liberal Arts at 2 p.m. Friday, Nov. 1, in the E.J. Ball Courtroom at the School of Law.

The lecture will be followed by a panel discussion among Driver, Robert Anthony Maranto, professor and Endowed Chair in Leadership in the Department of Educational Reform in the College of Education and Health Professions, and William D. Schreckhise, associate professor and chair of the Department of Political Science in the J. William Fulbright College of Arts and Sciences. Mark Killenbeck, the Wylie H. Davis Distinguished Professor of Law in the School of Law, will moderate.

The panel will accept questions, and the event is worth up to two hours of continuing legal education general credit. All are welcome to this free event, but registration is requested. Register today at attend.com/HH2019.

Driver was the Harry N. Wyatt Professor of Law at the University of Chicago Law School before joining Yale in July of 2019. He teaches and writes in the area of constitutional law and is the author of "The Schoolhouse Gate: Public Education, the Supreme Court, and the Battle for the American Mind." The book was selected as a Washington Post Notable Book of the Year, was an Editors' Choice of the New York Times Book Review, and received honorable mention for the American Bar Association's Silver Gavel Award.

Earlier this fall, he delivered "Dissents from Outside the Judiciary — The Southern Manifesto as a Dissent to the Brown Decisions" the second lecture in the 2019 Leon Silverman Lecture Series, which are held in the United States Supreme Court chamber and sponsored by the Supreme Court Historical Society.

Driver has a distinguished publication record in the nation's leading law reviews and is recipient of the American Society for Legal History's William Nelson Cromwell Article Prize. He has also written extensively for general audiences, including pieces in Slate, the Atlantic, the New York Times, the Washington Post and the New Republic where he was a contributing editor.

Driver has a Bachelor of Arts in public policy, with honors, from Brown University and a Master of Arts in teaching from Duke University where he held a Rockefeller Brothers Fund Fellowship. He was a Marshall Scholar at Oxford University's Magdalen College and earned a Master of Studies in modern history. He received a Juris Doctor from Harvard Law School. While in law school, Driver was the book reviews chair and an articles editor for the Harvard Law Review. He has clerked for Judge Merrick B. Garland, Justice Stephen Breyer, and Justice Sandra Day O'Connor.