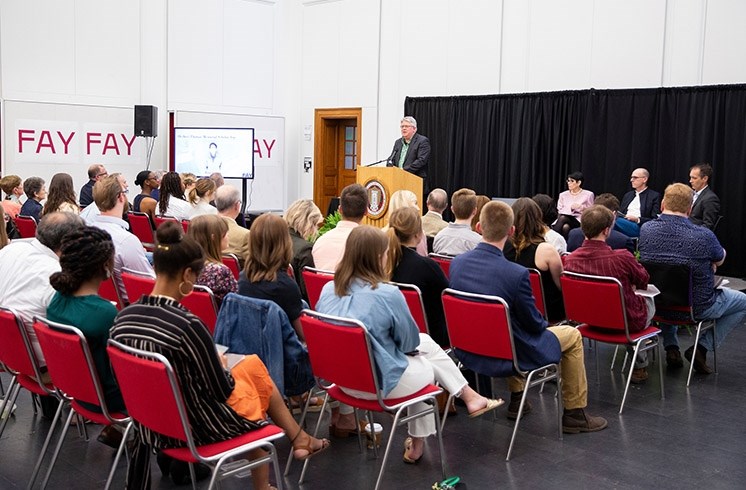 Here, scholarships and other awards were presented to Fay Jones School of Architecture and Design students at the 2019 Honors Recognition Reception and Ceremony, held in April in Vol Walker Hall.

FAYETTEVILLE, Ark. – Five new or enhanced scholarships for University of Arkansas students will have a big impact on freshmen in the Fay Jones School of Architecture and Design. The first round of new scholarships has already been awarded to four first year students in the school's design programs.

Collectively, these scholarships will strengthen the school's ability to recruit and retain students who might need financial assistance with their education, by providing several thousand dollars to students each year. Some of the scholarships qualify for matching money from the university's Advance Arkansas fund.

"Our ambition in the school is to provide every student in financial need with as much assistance as possible," said Dean Peter MacKeith. "Scholarship funds are the primary and constant objective of our advancement campaign, and these recent multiple commitments by alumni, partners and friends are an important confirmation of this goal."

The H.P. Engineering Freshmen Recruiting Scholarship in Design provides financial assistance to freshmen students entering the Fay Jones School, with a preference to Native American students. This is a $1,000 scholarship that will be awarded each year for the next five years.

Impacting the lives of Native American students is of particular interest to Pinkerton.

"As a Native American, I value the rich experience I had attending the University of Arkansas," he said. "I want other young Native Americans to have the opportunity for such an experience. I would like more Arkansans to be aware of the thriving Native American communities that exist just across our shared border with Oklahoma. I also know from growing up in an Oklahoma border town that the University of Arkansas is not on the minds of many young Oklahomans who are considering their options after high school."

Another new scholarship, the Bob J. and Virginia Beavers Advance Arkansas Endowed Scholarship, supports new students from Arkansas who exhibit financial need, records of academic success and a strong desire to complete their degree at the university. The endowment will generate about $2,000 in scholarship money each year, which will be matched by the U of A, for a total scholarship award of $4,000.

This award preference may be given in the categories of first generation, community leader, talented transfer or resilient Razorback, and it is renewable to students regardless of their field of study with acceptable progress toward a degree. Preference will be given to students who are high school graduates from St. Francis County and the Arkansas Delta.

This gift, given by Beth and Hal Prescott, is named for her parents and honors her father's career in architecture, his impact on Eastern Arkansas and his love for the U of A. Bob Beavers completed his Bachelor of Architecture in 1957 and went on to enjoy a successful career in architecture and settled in Forrest City, where his children grew up.

This tribute to her parents was important to Beth Prescott, but so was making sure this gift would help students just starting out in their college career.

"It allows them to have one less thing they have to worry about as they adjust to college life," Beth Prescott said.

Two other new scholarships were provided by an anonymous donor, and they honor the late Jim Etter Parker, who graduated with a Bachelor of Architecture from the Fay Jones School in 1981. Parker, originally from Missouri, designed multi-family units and commercial structures through his company, Parker Associates, which he founded in 1984.

The Jim Etter Parker Advance Arkansas Scholarship supports new students from Arkansas who exhibit financial need, records of academic success, and a strong desire to complete their degree at university. Award preference may be given in the categories of first generation, community leader, talented transfer or resilient Razorback, and it is renewable to students regardless of their field of study with acceptable progress toward a degree. This endowed scholarship will generate about $2,000 each year, which will be matched by the U of A, for a total student scholarship award of $4,000.

Also, the Jim Etter Parker Endowed Freshman Recruiting and Retention Scholarship in Architecture provides financial assistance to freshmen students entering the Fay Jones School. Preference will be given to those students who are graduates of a high school located in Missouri or Arkansas. The endowment will generate about $2,000 in scholarship money each year.

In addition, Victor Mirontschuk recently added funds to his existing EDI International Freshman Scholarship, making it an endowed fund. Mirontschuk founded EDI International in 1976, and he serves as its president as well as chairman and chief operating officer. He oversees the operation of the firm's offices in New York, Texas and California. Mirontschuk, a Fellow of the American Institute of Architects, graduated in 1974 with a Bachelor of Architecture from the Fay Jones School.

"The school is extremely grateful for these scholarship commitments, and to each individual who has given to this important cause," MacKeith said. "The value of the first year student support far exceeds the financial number: Scholarships truly transform the lives and futures of our students."