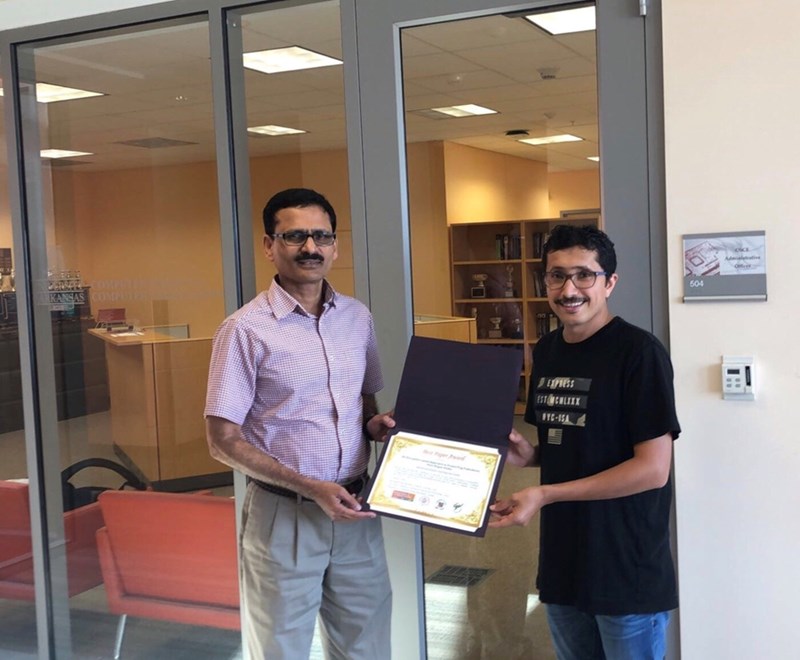 Mohammed Alshehri Sr. took home the top honors from the 12th International Conference on Security, Privacy and Anonymity in Computation, Communication and Storage in Atlanta over the summer.

His advisor is Brajendra Panda, professor of computer science and computer engineering.

Alshehri was honored for his research into fog node protection. Fog computing is the name for multiple cloud systems linked together to reduce the response time for users to retrieve data from the cloud.

"What I like about fog computing is it will make the communication between end users and the cloud faster," Alshehri said. "It's in the middle between the cloud and end users."

The danger with linking multiple cloud storage devices together is if one is infected by malicious software, it could spread to the others, potentially compromising huge amounts of data. Alshehri's research explores a solution to isolate a rogue fog node when it is identified.

The idea is to group the different nodes into smaller groups, which Alshehri calls "fog federations." Pieces of data with similar attributes would be grouped into the same federation, for example, it could group data based on the city it comes from and the type of institution that created it.

Those federations would still increase the speed for end users, because the computer wouldn't have to search through as many places to retrieve data, but it minimizes the threat of a virus infiltrating an entire network.

The implications of Alshehri's work are far-reaching.

"This research is general," he said. "You can apply it to hospitals, universities, to a corporation - any organization with sensitive information to protect."

Earning the "Best Paper" award was a gratifying moment for Alshehri.

"Sometimes in Ph.D. life, it can be a lot of ups and downs," he said. "After working for two years on my research, I'm proving I'm on the right track."