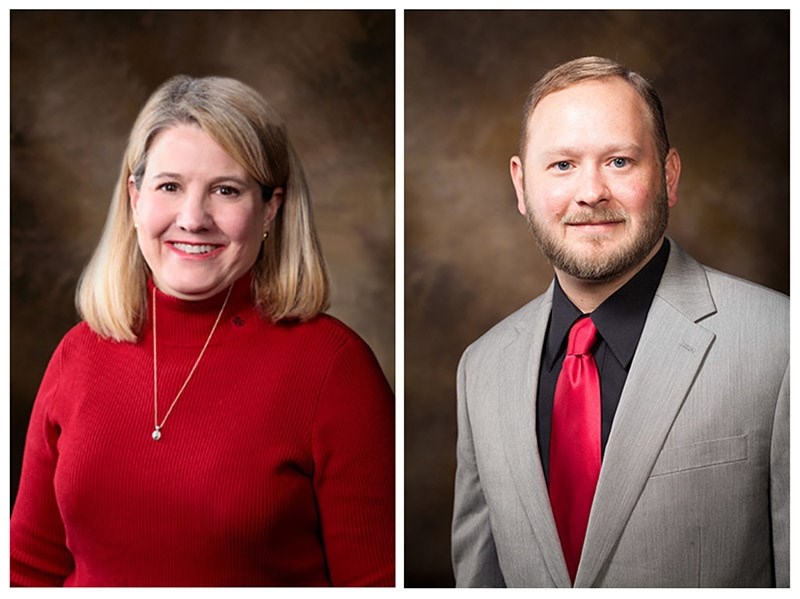 FAYETTEVILLE, Ark. – The development team in the Fay Jones School of Architecture and Design at the University of Arkansas both recently received promotions.

Purvis oversees all fundraising, alumni relations and related development efforts for the Fay Jones School, also working within the Division of University Advancement. She joined the school in July 2014 as the director of development.

"From her first days with the Fay Jones School, Mary Purvis' guidance of our advancement efforts rapidly accelerated the development of our Campaign Arkansas advancement goals, and even more, the achievement of those goals," said Dean Peter MacKeith. "With Mary's energetic commitment to the school's cause, its alumni and friends, and its faculty and students, we have annually surpassed campaign fundraising expectations and now stand on the threshold of surpassing our overall campaign. It has been a pleasure to work with her and to have her passion for her work animate the school's vision and overall impact.

"Mary has built innumerable relationships across the region and state — the nation, really — on behalf of the school and the university and, in so doing, has changed the lives of our students, our faculty and our alumni, as well as ensured the success of the school well into the future. I am very pleased for her promotion and look forward to continued work together in the coming year of Campaign Arkansas for the school."

Purvis came to the university in January 2012 as assistant director of Corporate and Foundation Relations, where she played an integral part in building relationships between the university and companies that wished to become more involved with its students and programs. Her experience in the corporate world, more than 23 years total, combined with her recent experience as a local fundraiser focusing on the Northwest Arkansas vendor community, made her an ideal fit for the job.

Since joining the Fay Jones School in 2014, Purvis has been instrumental in raising funds toward the school's $71 million Campaign Arkansas goal. This includes the $7.5 million gift in 2018 for the proposed Anthony Timberlands Center for Material Innovation and Design, a future five-story, 50,000-square-foot building to be built in the new Windgate Art and Design District in Fayetteville. In 2018, Purvis raised more than $9.5 million for the Fay Jones School.  She was also instrumental in securing several other significant gifts for the Fay Jones School, including the Cyrus A. and Martha Sutherland Chair in Preservation Design, the Herbert Fowler Endowed Chair in Architecture and Urban Design and the Jim R. and Mary Alice Van Sickle Endowed Scholarship in Architecture and Urban Design.

Prior to coming to the university, Purvis served as director of development for the Ozark Affiliate of Susan G. Komen for more than four years. In 2007, while working full time for Transplace as an operations manager, she also served full time as chair of the Komen Ozark Race for the Cure. She was in transportation and logistics for 15 years, during which she worked as operations manager in conjunction with Del Monte, Proctor and Gamble, Circuit City and JC Penney. She also served as carrier contract manager and later as carrier development manager for J.B. Hunt logistics. Prior to that, she spent eight years with GTE Southwest (now Verizon Communications) as a public affairs representative.

Purvis recently was selected by the Northwest Arkansas Business Journal as an honoree for the 2019 Women in Business awards program.

Peters joined the Fay Jones School in 2016 as the development manager, through which he has served as co-chair of the school's scholarship program and managed the Dean's Circle and Advisory Board. Previously, he spent more than three years working with Gift Services in University Advancement.

"Ryan Peters has advanced the cause and campaign for the Fay Jones School, as he has also advanced in his knowledge, experience and skill in our development efforts," MacKeith said. "His promotion is so well-deserved and will accelerate our efforts, in particular with our Next Generation alumni initiative on the near horizon. Together with Mary, the school has a great team in advancement."

As assistant director of development, Peters will continue to work closely with the senior director of development in planning and implementing cultivation and solicitation strategies to secure major gifts for the Fay Jones School. He also will continue to manage special projects related to advisory boards, alumni engagement activities, major donor research and other special events. In his new position, Peters will most notably play a major role in raising private gift support by initiating and cultivating relationships with alumni, friends, supporters and others that can help feed the major gifts pipeline. He will also manage a portfolio of donor prospects by continuously meeting and assessing capacity and interest in the school.

Peters, who is originally from Little Rock, holds a bachelor's degree in finance from the Sam M. Walton College of Business at the university. He is the third generation in his family to attend the U of A.

"Mary and Ryan are both valuable team members of University Development," said Kellie Knight, assistant vice chancellor for University Development. "Mary has been a wonderful leader in the Fay Jones School for the last five years and cares greatly about her work. She has made lasting connections with alumni and friends by listening to them and engaging them with the areas they're passionate about. She truly cares about each and every one of the benefactors she's worked with at the school. She and Ryan are both champions of the school and are fantastic representatives of the university across the country. They work together very well to achieve the goals for the school, as well as Campaign Arkansas."