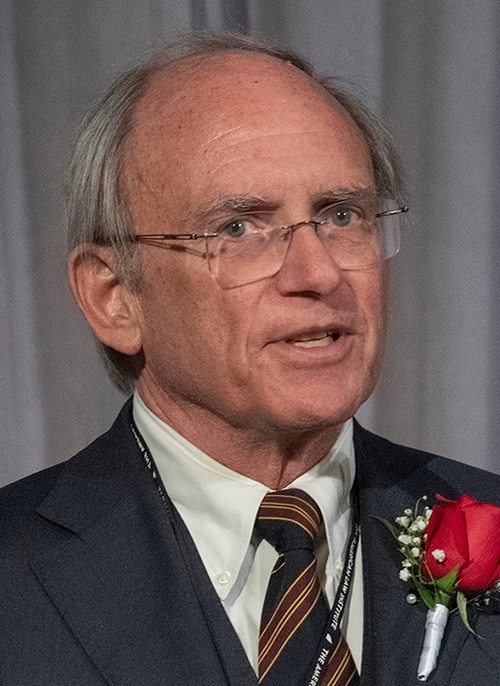 FAYETTEVILLE, Ark. – Mark R. Killenbeck, the Wylie H. Davis Distinguished Professor of Law, will return to the United States Supreme Court to deliver the first lecture in the 2019 Leon Silverman Lecture Series. The general theme of this year's series is Dissenting at the Supreme Court. Killenbeck's lecture, titled "The Dissent as Concurrence – From Fletcher to Whitney," will be given at 6 p.m. Monday, Oct. 7, in the Supreme Court chamber.

"Dissenting opinions have played an important role in the development of the law," Killenbeck said. "While Chief Justice John Marshall preferred that the Court speak with a single, unified voice, dissents began to emerge when Justice William Johnson joined the Court in 1804."

Johnson would earn the reputation as a frequent and articulate dissenting voice on the Court. "That said, he was also sensitive to the role of the Court and couched his separate opinion in Fletcher v. Peck (1810) as a concurrence, even as he voiced basis disagreements with Marshall's opinion for the Court."

A similar phenomenon was evident in Whitney v. California (1927), within which Justice Louis Brandeis, joined by Justice Oliver Wendell Holmes, issued a concurrence that can only be read as a systematic and total repudiation of the majority holding that sustained Charlotte Anita Whitney's conviction for her political activities under the California Criminal Syndicalism.

"Both opinions reflect an important mix of substantive disagreement and strategic approval of the result reached by the majority," Killenbeck said. "By agreeing, and yet disagreeing, Johnson and Brandeis pursued a subtle combination of doctrinal diversion and institutional fealty."

According to Killenbeck, their opinions provide important insights into the role dissent has played and will continue to play in the life of the Court and the development of the law.

This will be Killenbeck's third appearance at the Court. In May 2012, he delivered a Silverman Lecture on the history of the Commerce Clause. In October 2014, he provided the expert introduction for the Frank C. Jones Reenactment of the oral argument in M'Culloch v. Maryland (2019).

He is the author of numerous books, chapters, articles, and papers, with a special focus on federalism, American constitutional history, and affirmative action and diversity.

His book, "M'Culloch v. Maryland: Securing a Nation" (2006) was the first book-length treatment of that important case. His assessment of the Supreme Court's 2003 affirmative action decisions, "Affirmative Action and Diversity: The Beginning of the End? Or the End of the Beginning?," was published by the Educational Testing Service in their Policy Information Perspective series.

He has also contributed many chapters to works, including "The Oxford Guide to United States Supreme Court Decisions," the "Encyclopedia of the Supreme Court of the United States" and "Social Consciousness in Legal Decision Making: Psychological Perspectives."

The Leon Silverman Lecture Series, sponsored by the Supreme Court Historical Society, features lectures about unique and interesting events in the history of the Supreme Court. Associate Justice Stephen Breyer will serve as host and introduce Killenbeck. A reception will follow.

The lecture will be open to the public, with a nominal registration fee. Advanced registration is required and each person attending must have a confirmed registration at least 24 hours prior to the event. Further information may be found at the Supreme Court's Silverman Lecture Series page.

C-SPAN will cover the lecture to be aired at a time and date to be determined.