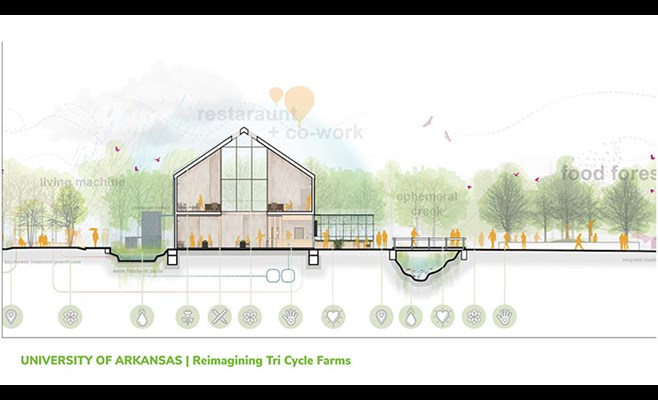 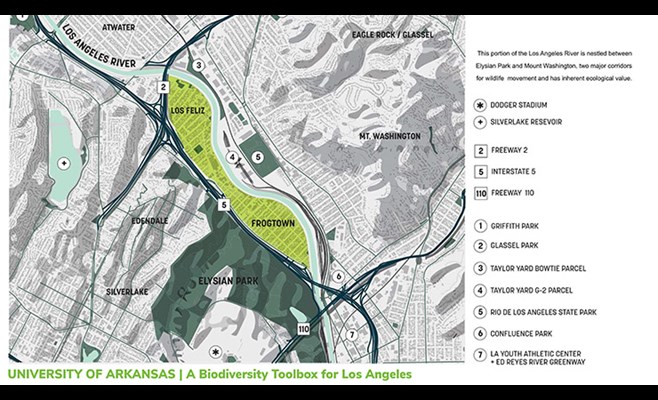 “A Biodiversity Toolbox for Los Angeles” by Erin Cox won a Merit Award. 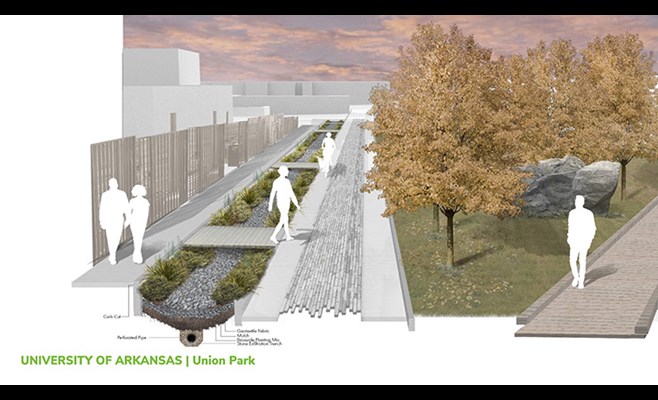 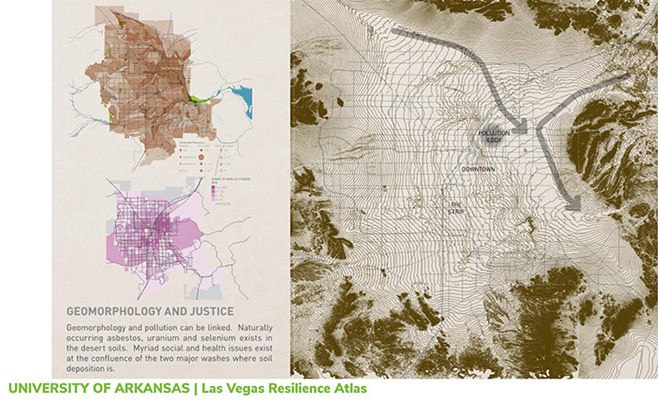 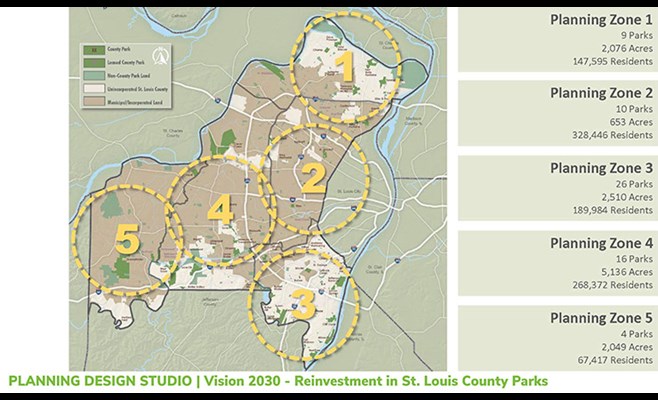 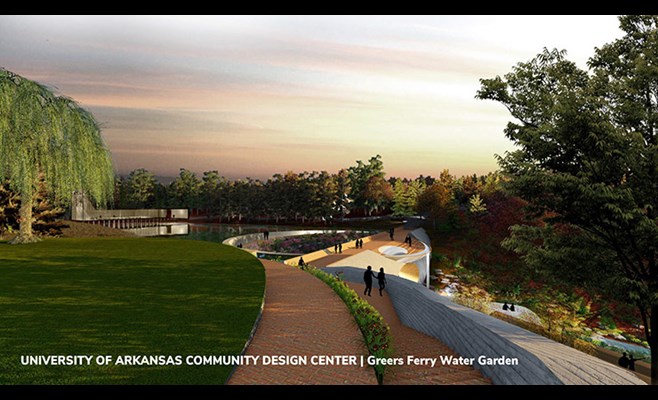 “Greers Ferry Water Garden” by the U of A Community Design Center won an Honor Award. 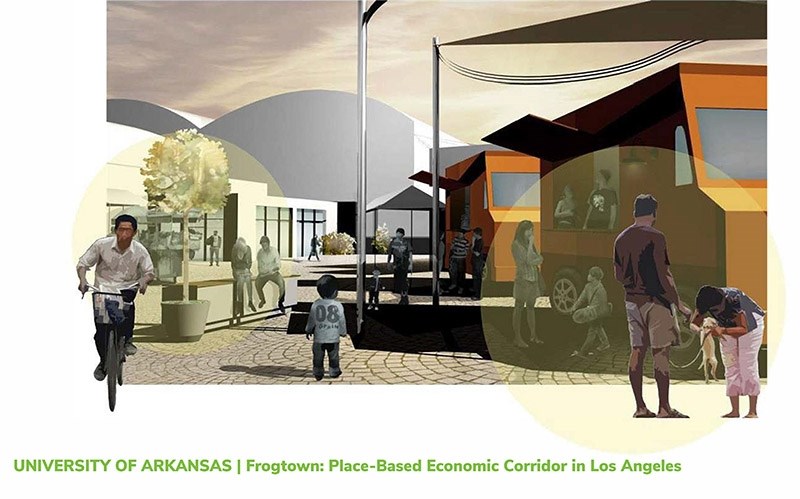 Jacob Costello received an Honor Award from the Central States Region of the American Society of Landscape Architects for his design "Frogtown: Place-Based Economic Corridor in Los Angeles."

FAYETTEVILLE, Ark. – Design work created by Erin Cox, Jacob Costello and Peter Stanley, landscape architecture students in the Fay Jones School of Architecture and Design, has been recognized by the Central States Region of the American Society of Landscape Architects. Additionally, projects by a Fay Jones School professor, alumnus and the University of Arkansas Community Design Center also were recognized.

Ken McCown, professor and head of the Department of Landscape Architecture, won a Merit Award for the "Las Vegas Resilience Atlas" design, and Scott Emmelkamp, who received his Bachelor of Landscape Architecture in 1987, won an Honor Award for the project "Vision 2030 – Reinvestment in St. Louis County Parks," both in the Professional: Planning and Analysis category. The U of A Community Design Center, in collaboration with Marlon Blackwell Architects and Ecological Design Group, won an Honor Award for the "Greers Ferry Water Garden" in the Professional: Design (Unbuilt) category.

Awards were handed out in April at the 14th annual ASLA Central States Regional Conference in St. Louis, Missouri. Fay Jones School students won four of the 15 awards granted in the student categories.

Cox, who graduated in May, created her design "A Biodiversity Toolbox for Los Angeles," as part of a spring 2018 studio led by Noah Billig, associate professor of landscape architecture, and Tori Kjer, the 2018 Verna C. Garvan Distinguished Visiting Professor in Landscape Architecture at the Fay Jones School.

Cox's project aims to understand the relationship of land use, development, ecology and the natural environmental in Los Angeles, especially in the spaces between neighborhoods fronting the LA River corridor, and engage in the planning and design of ecological resilient landscapes and public spaces. Through this study, Cox created a design toolbox that defines strategies that are flexible, replicable and adaptable to any urban context.

Cox worked on the "Reimagining Tri Cycle Farms" design as part of a fall 2018 studio led by McCown and Scott Biehle, a teaching assistant professor of landscape architecture. Cox was on a team with Abigail Redmon, an interior design student, and Patricia Gorgi, an architecture student.

In her landscape design, Cox re-envisioned an existing urban farmstead in Fayetteville with a more robust program in size, scope and community connection while examining the feasibility of the Living Building Challenge as a model for urban infill development in Northwest Arkansas. Through interdisciplinary collaboration, she established a set of guidelines to prioritize the goals and methods of the project, and determined how the sustainable systems would be configured to best maximize their use value. The proposal strategically used these systems to mitigate extensive brownfield damage to the site while maximizing areas for food production and wildlife habitat.

Costello, who graduated in December 2018, also completed his "Frogtown: Place-Based Economic Corridor in Los Angeles" design as part of the spring 2018 studio led by Billig and Kjer.

He looked at the Frogtown neighborhood in Los Angeles, which is in danger of being gentrified by outside investors seeking to capitalize on planned green infrastructure along the adjacent LA River. His project includes three design and planning scenarios that visualize how place-based economic interventions can unfold over time. The project also included two major placemaking techniques: connecting the neighborhood to the LA River Trail and using consumer behavior analysis techniques to implement tactical urban layouts with the capacity to develop over time into a vibrant economic corridor.

For his "Union Park" project, Stanley reimagined a parking lot with existing hydrological challenges as a vital gateway to Fayetteville's historical downtown district through a proposed light rail station that would connect the Northwest Arkansas region. The design for Union Park took account of responsible urban hydrology as well as civic space provision. Stanley worked with biological engineers to identify the quality and quantity of stormwater runoff on the site. From parking to a park, the design offered an entryway to the urban life of Dickson Street and the University of Arkansas.

McCown's design, "Las Vegas Resilience Atlas," was completed as part of his research, and it provides a collection of analyses into critical metropolitan infrastructural systems. These analyses highlighted key areas for action for the regional planning commission, as well as various resilience scenarios for Las Vegas.

The process of the atlas included collaborating with groups who manage infrastructure in the metro and region, which helped the analysis team understand and prioritize issues in each system and created a dialogue between constituents. The project explored the infrastructure of the metropolitan region, which allowed for discovery of strong and weak points in critical systems, locations of need and stakeholders with whom to partner.

Emmelkamp, a principal at Planning Design Studio in St. Louis, developed "Vision 2030–Reinvestment in St. Louis County Parks" after working with St. Louis County officials, who had envisioned a parks and recreation master plan that documented their facilities, identified needed improvements, addressed the recreation needs of the community and focused on sustainability.

"Greers Ferry Water Garden" is a U of A Community Design Center study that revived the forgotten vision for a public water garden in north-central Arkansas by Edward Durell Stone, the renowned mid-century modernist, and his son, E.D. Stone Jr.