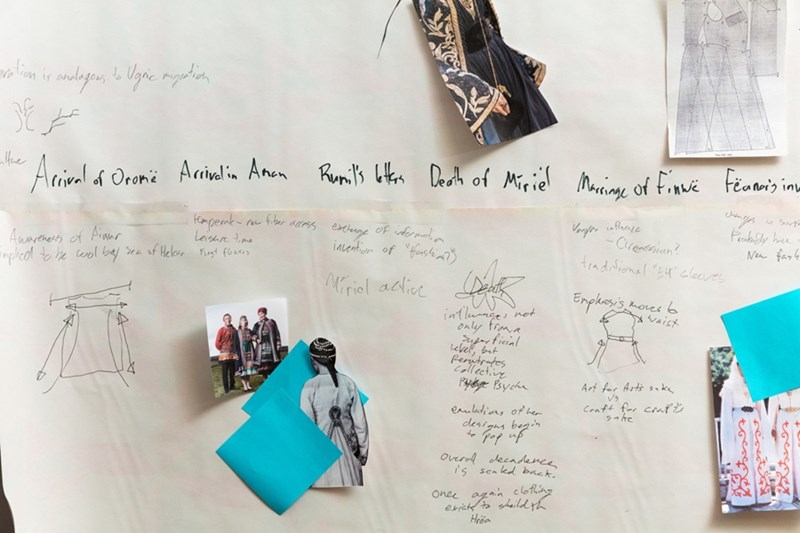 Grace Costello mined hundreds of years of Finnish, Uralic and Elvish history to create the unique and stunning designs on display in Gearhart Hall.

The costumes flow in folds of silk and velvet, catching the eye with midnight blues, deep crimsons, and flashes of gold and silver. They evoke the brilliance of fantasy, and the grace of Tolkien's Elves, for whom they were made. But you haven't seen a Galadriel or an Elrond dressed in anything like this before — with these pieces, honors alumna Grace Costello reimagines Elven clothing standards in the First Age of Tolkien's Legendarium, thousands of years before the events of The Lord of the Rings take place.

Costello started sewing at the age of seven on their grandmother's black Fleetwood sewing machine, and got their very own Singer at the age of 10. Several years of intricate Halloween costumes later, they realized that their love of costuming was more than just a hobby — it was career-worthy. Costello, who graduated in December 2018 with a degree in costume design from the Apparel Merchandising and Product Development program in the School of Human Environmental Sciences, combined their love for design with their interest in the world of J.R.R. Tolkien to create two half-size costumes, which are now on display on the second floor of the honors wing of Gearhart Hall.

"It's all incredibly Eurocentric," Costello says of the most popular illustrations and film depictions of Elven clothing. Because of Tolkien's heavy influence in the fantasy genre, "these fashions have entered into the collective subconscious, especially after the Peter Jackson films. By changing the way we costume these people, we can change the way we see heroes in the collective subconscious."

When creating the designs, Costello opted to mine the migration and cultural evolution of the Elvish race to inform their pieces, instead of relying on familiar European patterns. Costello was influenced by Finnish and Uralic geography and fashion history, but emphasizes that "you can't just lock in" to a certain fashion tradition or design inspiration for fantasy worlds. "Tolkien's work comprises this huge, expansive world. There are so many ways you can interpret it."

The two ensembles were created for a male metalsmith and a female scholar, the primary differences in the two designs resting not in gender but in their use and purpose. Both pieces are highly modular, with overskirts or mantles that can be added or taken away to make the outfits more formal or more suitable to working. The cuts of the fabric — T-shaped tunics and tighter-fitting garments that are sewn, rather than draped — are vestiges of the cold climate in Cuiviénen, the Elves' first home. The fabrics themselves, however, are silk and natural silk blends, materials that would have been plentiful in the warmer climate of Valinor, where the metalsmith and scholar lived during the First Age.

"Grace was an exceptional student who always excelled at research and craftsmanship," said Hubert. "From the detailed research behind the original idea, to the fabric sourcing and handwork that went in to each garment, no detail was ignored. This honors project is not only a literary study, but a true exhibit of talent and artwork that demonstrates the power of creative projects."

Costello's costumes will be on display through the fall semester and can be viewed in the upstairs student lounge in the honors wing of Gearhart Hall. For more information about Costello's work, visit www.aubreycostello.com.