Hazbun to Discuss Political Insecurity in the Middle East, Tonight 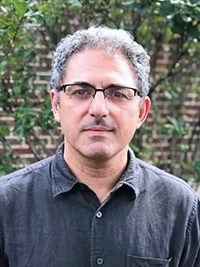 Political scientist Waleed Hazbun will give a talk on political insecurity in the Middle East following U.S. intervention at 5:30 p.m. Monday, Sept. 16, in Kimpel Hall 102.

Waleed Hazbun, Richard L. Chambers Professor of Middle Eastern Studies in the Department of Political Science at the University of Alabama, will give a lecture entitled "In America's Wake: Turbulence and Insecurity in the Middle East." The lecture will take place at 5:30 p.m. Monday, Sept. 16, in Kimpel Hall 102 on the University of Arkansas Fayetteville campus.

The event is free and open to the public. Metered parking is available in the nearby Harmon Avenue Parking Garage.

Since the Arab Uprisings, the regional politics of the Middle East has transformed from a system organized around and against a security architecture managed by the United States, into a multipolar system lacking norms, institutions, or balancing mechanisms to constrain conflict and the use of force. Hazbun argues that this shift is not a result of the retreat of the U.S. or a consequence of a so-called "power vacuum," but a product of past U.S. efforts to impose order on the region through coercive force.

Post 9/11 interventions by the U.S. failed to establish a stable regional security architecture, but instead generated intense insecurity for both rival and allied states as well as societies, and enabled the proliferation of armed non-state actors and the erosion of state capacity. As the regional system has become more complex and multipolar, a condition Hazbun refers to as turbulence, continued reliance by the U.S. and its allies on coercion rather than accommodation has only intensified the dynamics of regional instability.

Hazbun teaches international relations and American foreign policy in the Middle East at the University of Alabama. He holds a B.A. in Politics and Near East Studies from Princeton University and a Ph.D. in Political Science from the Massachusetts Institute of Technology. Hazbun previously taught at the Johns Hopkins University and the American University of Beirut, where he served as director of the Center for Arab and Middle Eastern Studies. He is the author of Beaches, Ruins, Resorts: The Politics of Tourism in the Arab World (Minnesota 2008), co-editor of New Conflict Dynamics: Between Regional Autonomy and Intervention in the Middle East and North Africa (Copenhagen 2017), and a member of the Critical Security Studies in the Arab World working project supported by the Arab Council for the Social Sciences. His two current research projects are: the politics of insecurity and U.S. policy in the Arab World; and the global politics of airports and aviation in the Middle East.

This lecture is presented by the King Fahd Center for Middle East Studies, the Department of Political Science, and the International and Global Studies Program at the University of Arkansas.