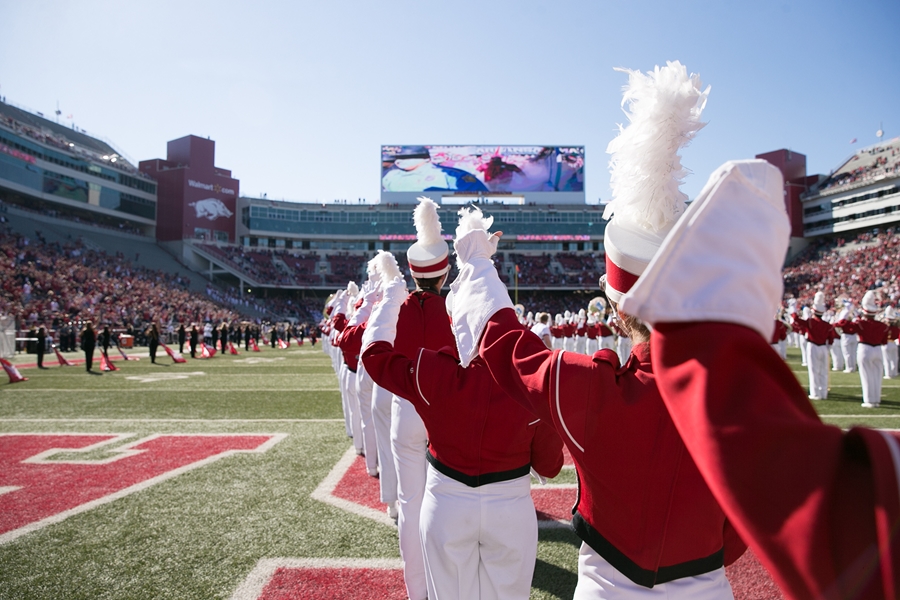 Inside the Big A on the field at Razorback Stadium.

The Razorback Band will bring back the familiar tradition of Band Day for the Sept. 14 game against Colorado State. This program is open to all high school band students from around the state and surrounding region and allows them to interact with the Razorback Marching Band.

The invited musicians will perform alongside the Razorback Marching Band on an exciting halftime show that features the music from the Marvel Cinematic Universe.

"Band Day allows us to expand our scope of outreach beyond campus and throughout the state," said Benjamin Lorenzo, director of the Razorback Marching Band.

The marching band will also host its seventh-annual Twirler Day on Saturday, Sept. 21. The guest twirlers will perform with the band and University of Arkansas Twirlers during halftime when the Arkansas Razorbacks take on the San Jose State Spartans in Donald W. Reynolds Razorback Stadium.

"Twirler Day gives young twirlers who are considering continuing the sport in college the opportunity to experience the thrill of college game day," said Ashley Moss, University of Arkansas twirling instructor and alumna. "There is nothing better than twirling for Hog Nation fans."

The Razorback Marching Band, part of the department of music in the J. William Fulbright College of Arts and Sciences, has more than 330 student members representing every college within the university.