Law Professor to Lecture on Contentious Church and State Question 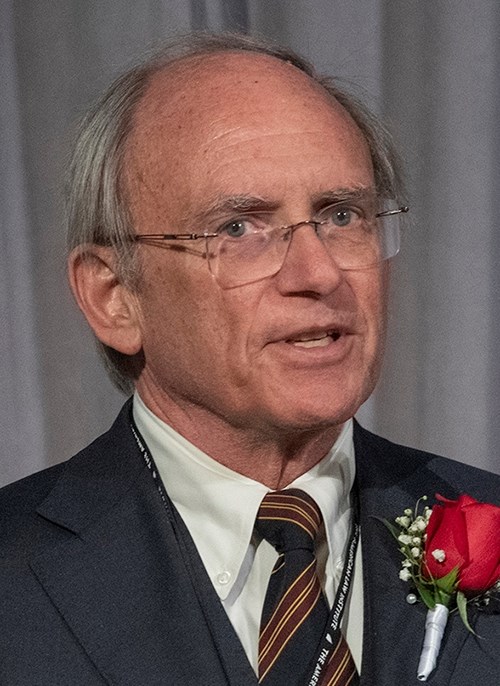 FAYETTEVILLE, Ark. – Should Native Americans be allowed to sacramentally ingest peyote with no criminal penalties? Does a crèche belong on the courthouse lawn? And what about the 8-foot-tall bronze statue of the satanic goat monster Baphomet, briefly on view last year at the Arkansas Capitol building?

Mark Killenbeck, the Wylie H. Davis Distinguished Professor of Law, will outline the increasingly contested relationship between religious practice and civic life in “Church and State,” a free public lecture at 5:15 p.m. on Wednesday, Sept. 11, in the Gearhart Hall Auditorium, room 26. All on campus and in the community are invited to attend.

Tensions between church and state date back to the Pilgrims, who fled England to seek religious freedom in the new world.

“It’s one of our founding myths, the evils of an ‘established’ church and the noble quest for religious freedom. And what did the Pilgrims do? They created a legal structure that mirrored the one they had in England – they replicated exactly what they decided to flee!” Killenbeck said.

The First Amendment of the U.S. Constitution, adopted in 1791, speaks of both “establishment” and “free exercise” of religion. And for more than 200 years successive generations of lawyers, politicians and just plain citizens have disagreed about virtually every aspect of what those terms mean.

The United States Supreme Court arguably gives us answers. But, as Killenbeck has explained, “Here’s the fun: the court rules, and the body politic ignores them. Prayers before high school football games are forbidden, but this fall, in virtually every state in the nation, such prayers will be offered.”

The issues are important and the stakes profound in a nation that has become increasingly diverse.

“These are matters of fundamental importance to everyone,” Killenbeck said. “Religion is intensely personal, and the temptation to judge these matters from your own religious perspective is pervasive. Indeed, the Supreme Court itself often seems to divide on that very basis, yielding rulings that compound the problems.”

Killenbeck’s public lecture serves as a preview for his Honors College Signature Seminar, “Church and State,” scheduled for spring 2020. The Signature Seminars, designated HNRC 4013H in the university’s Catalog of Studies, have addressed topics ranging from the evolutionary tales told by fossil teeth to the neuroscience underpinning human response to music and music making.

Two other Signature Seminars will be offered next spring: “Violence,” taught by Ram Natarajan, assistant professor of anthropology, and “Gothic,” led by Kim Sexton, an associate professor of architecture, and Lynda Coon, medieval church historian and dean of the Honors College.

Deans of each college may nominate professors to participate in this program, and those who are selected to teach will become Dean’s Fellows in the Honors College. Over time, the Honors College plans to bring in leading scholars from other institutions to teach some of these courses, as well.

Honors students must apply to participate, and those selected will be designated Dean’s Signature Scholars. The course application is posted online on the Signature Seminars web page.

Mark R. Killenbeck is a Distinguished Professor and holds the Wylie H. Davis endowed chair in the School of Law. He earned an A.B. in English literature from Boston College, and a J.D. and Ph.D. from the University of Nebraska. He has been a member of the law faculty at Arkansas since 1988 and teaches Constitutional Law, the First Amendment and American Constitutional History. He is the author of numerous books, chapters, articles and papers, with a special focus on federalism, American constitutional history, and affirmative action and diversity.

His articles have appeared in major national law journals, including the Supreme Court Review, Journal of Supreme Court History, California Law Review, Michigan Law Review, Vanderbilt Law Review and Hastings Law Journal. His book, M’Culloch v. Maryland: Securing a Nation, published by the University Press of Kansas, was the first book-length treatment of that important case. His assessment of the Supreme Court’s 2003 affirmative action decisions, Affirmative Action and Diversity: The Beginning of the End? Or the End of the Beginning?, was published by the Educational Testing Service in their Policy Information Perspective series. He has also contributed chapters to a number of works, including The Oxford Guide to United States Supreme Court Decisions, the Encyclopedia of the Supreme Court of the United States and Social Consciousness in Legal Decision Making: Psychological Perspectives. He was recently inducted as a Life Member of the American Law Institute after 25 years of service to the organization.

About the Honors College: The University of Arkansas Honors College was established in 2002 and unites the university’s top undergraduate students and professors in a learning environment characterized by discovery, creativity and service. Each year the Honors College awards up to 90 freshman fellowships that provide $72,000 over four years, and more than $1 million in undergraduate research and study abroad grants. The Honors College is nationally recognized for the high caliber of students it admits and graduates. Honors students enjoy small, in-depth classes, and programs are offered in all disciplines, tailored to students’ academic interests, with interdisciplinary collaborations encouraged. Fifty percent of Honors College graduates have studied abroad and 100 percent of them have engaged in mentored research.