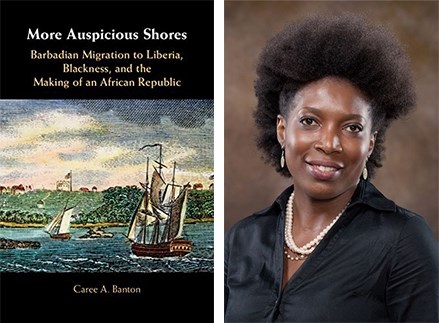 A new book explores migration to the West African Republic of Liberia and its effects on ideas of Blackness and pan-African identity.  Published by Cambridge University Press, More Auspicious Shores: Barbadian Migration to Liberia, Blackness, and the Making of an African Republic chronicles the migration of Afro-Barbadians to Liberia, a colony originally created by the American Colonization Society for American Blacks. In 1865, when 346 British Afro-Barbadians fled Caribbean for the then independent Liberia instead of the nearby British colony of Sierra Leone, it opened up several questions about the nature of British post-emancipation freedom, citizenship, and nationhood. The Barbadians had come to view Liberia as a means of achieving their post-emancipation goals and promoting a pan-Africanist agenda while simultaneously fulfilling their 'civilizing' and 'Christianizing' duties.

Professor Caree Banton, the book's author, closely examines the Afro-Barbadians and provides a transatlantic approach to understanding the political and sociocultural consequences of their migration and settlement in Africa. Banton reveals how, as former British subjects, Afro-Barbadians navigated an inherent tension between ideas of pan-Africanism and colonial superiority. Upon their arrival in Liberia, an English imperial identity distinguished the Barbadians from African Americans and secured them privileges in the Republic's hierarchy above the other group. By fracturing assumptions of a homogeneous Black identity, Banton ultimately demonstrates how Afro-Barbadian settlement in Liberia influenced ideas of Blackness in the Atlantic World.

The book has earned early praise, with professor Claude Clegg, the Lyle V. Jones Distinguished Professor at the University of North Carolina-Chapel Hill, noting, "Banton's book fills a significant gap in the story of Liberia's creation and its place in the larger Afro-Atlantic world. She skillfully renders the complex identities that Barbadians crafted at home and in Africa, while being mindful of their often conflicted notions of race, civilization, and empire."

Banton is an associate professor of history and African and African American studies in the J. William Fulbright College of Arts and Sciences at the University of Arkansas.